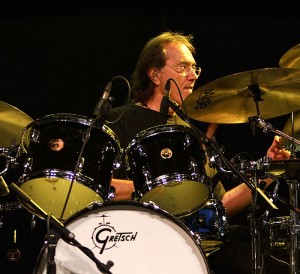 Vincent ‘Vinnie’ Colaiuta was born on February 5th, 1956. He was originally from Brownsville, Pennsylvania, and as you’d probably guess from his Christian name and surname was brought up a Catholic. Having started out beating on pots and pans he was given his first (non serious) paper-headed toy drumset when he was seven years old. He also had an electric guitar at the time, and was also taking piano lessons.

Around 1970, his parents bought him a Rogers set and the story goes that he just sat down at the set and could immediately play it. It wasn’t until he was in his early teens when the teacher of his school band gave him a tutor book by Haskell Harr which taught him some of the basics. He had been taking organ lessons for quite some time but was more interested in joining his high-school band as a drummer. He was turned down because they had too many percussionists, so instead he played the flute in the band. He bided his time until there was a place for him in the drum section whereupon he jumped right in. Soon he was playing professionally around town and spending his summers at music camps.

Like most drummers of his generation in America, he grew up influenced by The Beatles, The Dave Clark 5, The Monkees and the Rolling Stones. However like many of our G&S subjects it didn’t take him long to get into Buddy Rich. However all that changed when he heard Tony Williams’ ‘Ego’ album. By chance he bumped into Steve Smith who suggested he went to Berklee Music College in Boston and study with his old tutor, Gary Chaffee.

Vinnie says his first day began at 7am along with 800 drummers and 1500 guitarists! During his time at Berklee he discovered Alphonse Mouzon and Billy Cobham and managed to pass out of the percussion Department in a single semester! Vinnie wanted to stay at the college and learn more about composition and arranging but couldn’t afford the tuition fees. He left Berklee and, because jazz didn’t pay enough, played Top 40 music – Led Zep, Cream and Deep Purple – around Boston for a couple of years before eventually relocating to Los Angeles.

He began his proper career touring with Al Kooper as well as playing in lounge bands and was on an album with Christopher Morris. He returned to Boston in April 1978 at age 22 before taking the bus back through the snow to LA with his clothes, drums and $80 in his pocket. 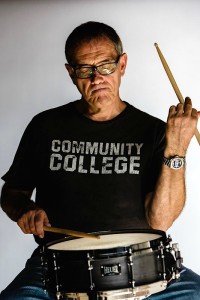 It was while he was playing in jazz clubs that he heard Frank Zappa was looking for musicians so he auditioned. This try-out necessitated him playing on Terry Bozzio’s drumset which had two bass drums – something he’d never played before. One of the pieces in question was Zappa’s infamous ‘Black Page’ which he had already read and memorised and various other pieces including one in 21/16 in which, to cement his position, he played a solo. He must have played it exceedingly well because he got the gig! He worked on many Zappa inspired albums from 1979 to 2016 starting with ‘Joe’s Garage’ and ‘Tinsel Town Rebellion’,and ‘Shut Up‘N’Play Yer Guitar’. His playing on Joe’s Garage has been voted as one of the top 25 drumming performances of all time.

In 1981 he decided to get off the road, saying he’d only go back to touring if it was with Sting or Peter Gabriel. Meantime he concentrated on recording sessions with the likes of Gino Vanelli and Tom Scott. Like the majority of studio players in America’s music cities he recorded during the day and, to keep his hand in, played in clubs at night.

He was invited by bass player Larry Klein to play on an album with his girlfriend Joni Mitchell and Vinnie went on to be the best man at their wedding, He proceeded to tour with her and eventually played on a half-dozen of her records. In 1984 Vinnie played on an album with Barbra Streisand called “Emotion”

In 1990 he actually did get the call he was hoping for from Sting’s management asking if he’d be willing to pay his own way across the Atlantic to play with him. He said if it really was an actual audition, that they should pay the fare and if he didn’t get the gig, he’d give them their money back! They bought him the round trip ticket, but as we know, got the job so presumably didn’t give them the money back. He stayed with Sting through the nineties having played on six albums including: “Ten Summoner’s Tales”, “Mercury Falling”, “Brand New Day”, and “Sacred Love”.

Sting had previously had several notable drummers, and Robyn Flans once asked Vinnie what he thought Sting saw in his playing which he didn’t find with those others. Vinnie’s response was simple: “Someone who played for the music, but had an identity of his own. He just wanted someone who felt like the right guy.” I’ve read Sting had a set of criteria for his drummers, although initially Vinnie didn’t know them. For example on certain songs he didn’t want any fills into the chorus. Vinnie also had to learn the crucial lesson that unlike a club, playing in an arena necessitated him saying more with less. 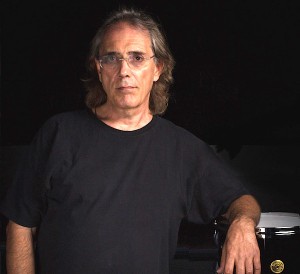 The guitarist Steve Vai had this to say about Vinnies ability to play Zappa’s complex music.

“He’s one of the most amazing sight-readers that ever existed on the instrument. One day we were in a Frank rehearsal. This was early ‘80s and Frank brought in this piece called “Mo‘n’Herb’s Vacation”. Just unbelievably complex. All the drums were written out, just like The Black Page except even more complex. There were these runs of like 17 over 3 and every drumhead is notated differently.

“And there were a whole bunch of people there. I think Bozzio was there. Vinnie had this piece of music on the stand to his right. To his left he had another music stand with a plate of Sushi on it. Now the tempo of the piece was very slow, like The Black Page. The first riff came in with all these choking of cymbals, hi hat ruffs, spinning of Roto-toms and all this crazy stuff. And I saw Vinnie reading this thing. Now he has this habit of pushing his glasses up with the middle finger of his right hand. Well I saw him look at this one bar of music, it was the last bar of music on the page. He started to play it and he was turning the page with one hand. Once the page was turned he continued playing the riff with his right hand and he reached over with his left hand, grabbed a piece of sushi and put it in his mouth, continuing the riff with his left hand and feet, pushed his glasses up and then played the remaining part of the bar.

“It was the sickest thing I have ever seen. Frank threw his music up in the air. Bozzio turned around and walked away. I just started laughing.” 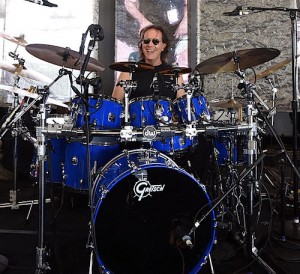 As far as drum sets are concerned, Vinnie has had a slightly chequered career, after starting with the toy set which was followed by the Rogers. He started playing Yamaha during the eighties and he stayed with them for ten years. During this time he mainly used a set that was 10 x 10, 12 x 10, 14 x 12, 16 x 14, 22 x 18” with 4” deep snare drum. From Yamaha he moved to Gretsch in the nineties (the black and white kit). In 2012 he moved to Ludwig for a couple of years before playing drums made meticulously by customiser and restorer Chris Heuer in Burbank. After this he bounced back to Gretsch in 2016. Nowadays he has slightly shallower mounted toms and a deeper bass (in a lovely medium blue) and 12 x 5” and 14 x 5” diameter snares.

He was once with Zildjian cymbals and had a great deal of input into their A Custom line, although these days he’s endorsing Paiste Formula 602 and his hardware comes from DW.

In 1996 Vinnie Colaiuta was included in The Modern Drummer Hall of Fame. I can’t say I really know Mr Colaiuta although I’ve met him at the odd drum show in a previous life.

There are plenty of quotes about Vinnie Colaiuta one of my favourites being: “If you threw Tony Williams and Steve Gadd into a blender, Vinnie would be the result!” But there’s more – as someone once said: “Ask 50 drummers about Vinnie Colaiuta you’ll get the same answer; there’s Vinnie, then there’s everybody else.”