Brent Carter And Friends – America’s Elite Musicians And Singers From The Soul/Groove Community Have ‘WORK To Do’ ! 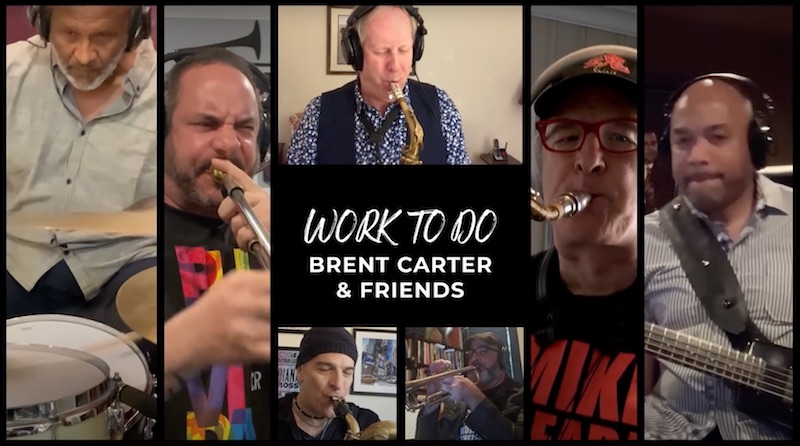 So what to do when you are locked down, road habits and creative instincts denied? You make a record for fun with your friends, that’s what you do, right?.

And that’s exactly what Brent Carter – former lead vocalist with Tower of Power, and currently, Average White Band – did. And when you have an address book like Brent’s, the ‘fun project’ takes on a life of its own, to become something of a ‘moment in time’ record, featuring some of the most respected musicians and singers around.

Aided by his good friend and fellow bandmate, sax player Fred ‘Freddy V’ Vigdor, Brent has assembled an all-star line up of front line artists and legendary side men from the world of funk, soul and groove music to breath new life into the classic (and aptly named!), Isley Brothers song, ‘Work To Do’.

Can be PURCHASED here https://brentcarterandfriends.bandcamp.com/track/work-to-do

ALL PROCEEDS TO SAVE THE CHILDREN GLOBAL COVID 19 APPEAL

Brent explains ‘It all started when I had an idea to make a fun ‘homemade’ video of the Tower Of Power’s hit ‘What Is Hip’ featuring a bunch of the former ToP singers from over the decades.  I asked ToP band leader, Emilio Castillo if he would like to be a part of the project. I told him the singers that were already involved. He was excited about it and introduced the video. The video was really well received, and that led to us following it up with this ‘Work To Do’ project, again just for fun, but it quickly took on a life of its own. We ended up with a dozen great singers, including the great Will Downing, and a 19 piece band, including eight drummers’.

And when Brent mentions drummers, these aren’t just any drummers, these are musicians recognized as being amongst the very best in the business; people like Steve Ferrone (AWB, Clapton, Tom Petty), Tower of Power’s legendary David Garibaldi, and Snarky Puppy’s Larnell Lewis, to name but three. (A full list of those involved is relayed below, together with just a few names from their impressive resumés).

As Brent continues to explain ‘everyone was so into the idea, that they suggested getting other people involved and the thing just grew and grew. Being in lockdown, everyone dialed in their parts…some people used state of the art home studios, others just used their smart phones, but everyone got into the spirit of the thing. We mixed it all together and, given the circumstances, we made something we’re all pretty proud of’

And rightly so, this is something of an historic record, given not just the current times in which it was made, but also given the ‘no ego, no roadblock’ spirit and co-operation between the elite community of musicians concerned. And not least, of course, because of the quality of the record itself!

As the song says, there’s Work To Do!

For more info, including potential interview requests with Brent and other members of the project, please contact Mark Ede at BiGiAM mark@bigiam.co.uk, 07860 286688. And if you are able to kindly feature this please do let us know and we’ll happily cross-promote. A list of participants follows below:-

Mixed And Mastered By James Welch At Masterlink Studios