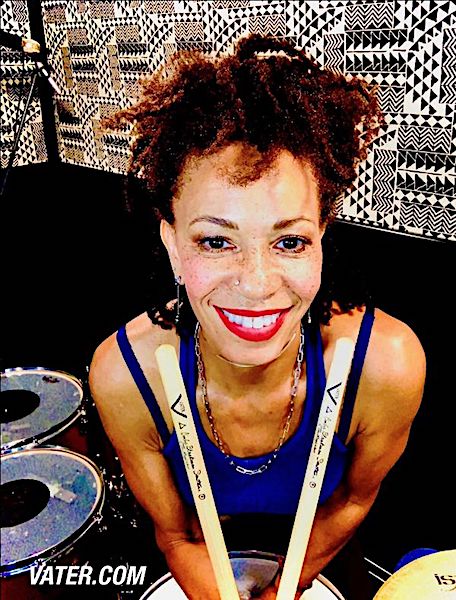 Cindy Blackman Santana has been a powerhouse figure in the music industry for decades. Cindy has been creating magnificent musical time and space since the beginning of her career as a busking street performer in New York City in the ’80s through the present day, touring the globe and making her own albums. In addition to collaborating onstage and in-studio with her own groups, she has toured and recorded with artists including Pharoah Sanders, Cassandra Wilson, Bill Laswell, Joss Stone, Joe Henderson, Buckethead, Don Pullen, Hugh Masakela, and Angela Bofill. From 1992 to 2007 and again in 2014 & 2015 she was the drummer in Lenny Kravitz’s band, performing through multiple world tours and major hit albums. In 2010, she was part of the all-star line-up performing “Bitches Brew,” a tribute to Miles Davis’ seminal album staged at the San Francisco Jazz Festival and NYC Winter JazzFest.

More recently, Cindy has become the regular touring drummer for Santana. Having met several years earlier at a festival in Europe while she was touring with Kravitz, Cindy first played with Santana in spring 2010, when drummer Dennis Chambers had a previous commitment. Electricity onstage generated chemistry offstage—Carlos proposed to Cindy during a July 2010 concert, and they married in December of that year.

On her own, Cindy is continuing to develop music that she drives so powerfully and will release a 17-song tour de force album, “Give The Drummer Some”, on September 18, 2020. The album highlights Cindy’s incredible versatility both behind the drum kit and in front of the microphone and features the creme de la creme of guitarists, including eight songs with Carlos Santana, two songs with John McLaughlin, three songs with Vernon Reid, and one song with Kirk Hammett. With multiple tracks produced by Grammy Award-winning Narada Michael Walden, the album is an eclectic mixture of old school funk and radio-friendly rock/pop combined with rock and jazz instrumentals.

Talking with ABC News recently about “Give The Drummer Some”, Cindy said “If I had any kind of agenda at all, I wanted this album to be all-encompassing. Pop, funk, rock, jazz — I embrace the creativity in all of it, and I feel so inspired when I play it. That’s what I wanted people to feel when they listen to the album – inspired.”

“Give The Drummer Some” pre-order and additional info available at CindyBlackmanSantana.com

Cindy is currently working closely with Vater on an all-new drumstick design that perfectly suits where she is musically and truly connects her to the instrument in both feel and tone. Stay tuned for more details about that coming soon!