Back to technique this month.

Much as I’d love to see these issues go away, a quick look at various social media platforms is enough to show they haven’t… yet.

So I thought I’d look at these 2 really common issues, and hopefully explain not just how to solve them, but actually why they are an issue.

1. “When I hit my pad hard, it doesn’t trigger all the time. It works fine when I play it quietly. Is my pad broken?”

Firstly, the chances are that the pad is fine.

Usually, when this happens, it is caused by the gain of the pad being too high. What this means is that the module is amplifying the trigger signal from the pad too much – so much in fact that the module cant read the how big the signal is. It doesn’t know if you have hit the pad really hard or really lightly. 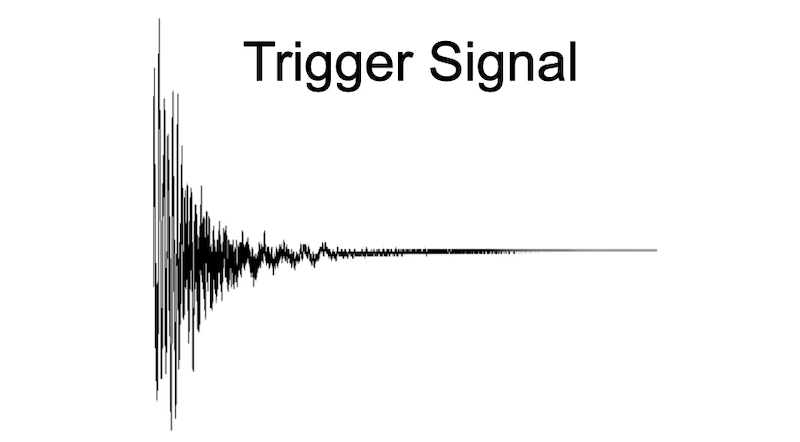 Imagine the part of the module that looks at how loud the sound (the pad input) is a door, 2m high. The signal (wobble) from the pad is a wave of water coming though the door. If the wave is smaller than 2m high, it is easy to see the shape of the wave, and to work out how tall it is. 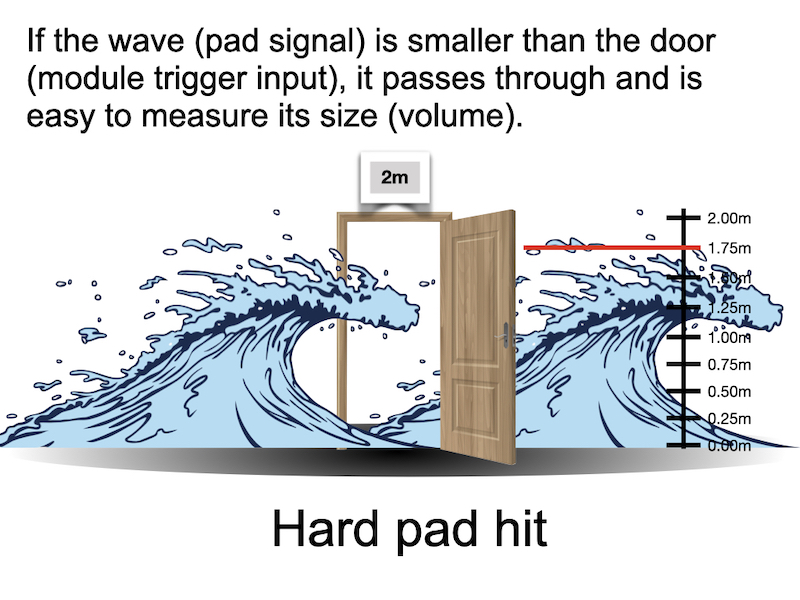 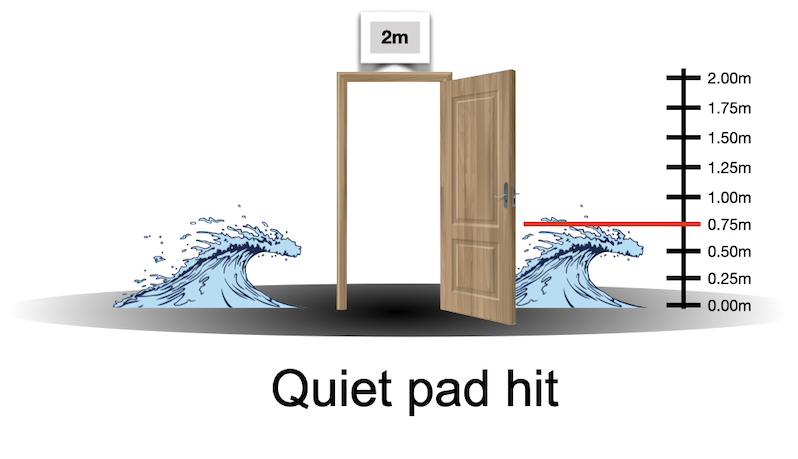 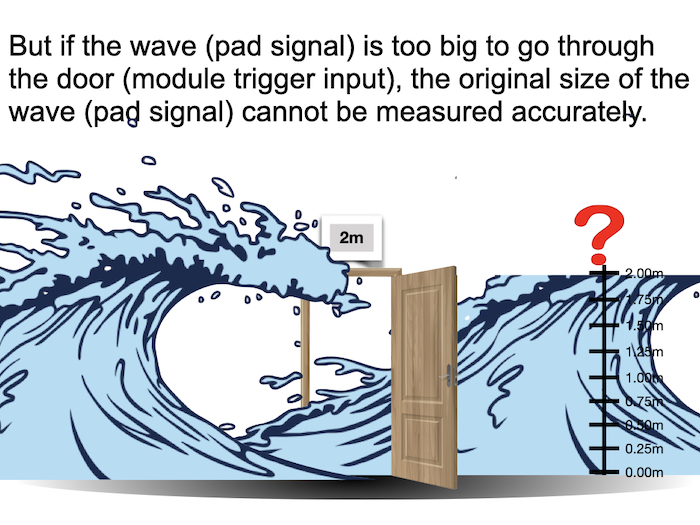 So the drum module cant work out what just came through the door, but it might see some of the smaller ‘waves’ coming after, so it ignores the bit it didn’t understand, and just plays a quiet sound instead.

So the solution to this is simple – turn down the gain, or ‘sensitivity’ so that if you hit your pad really hard, it never gets bigger than a size that the trigger input (or door) can handle.

2. “Hitting my snare pad hard makes my tom pad trigger quietly. I’ve turned up all the Crosstalk settings to full and now nothing triggers correctly.”

Firstly, don’t mess with Crosstalk settings unless you REALLY need to. I know it seems like an obvious thing to do, but as in the example here, it can mess up other stuff.

So first, put the Crosstalk settings back to where they were. 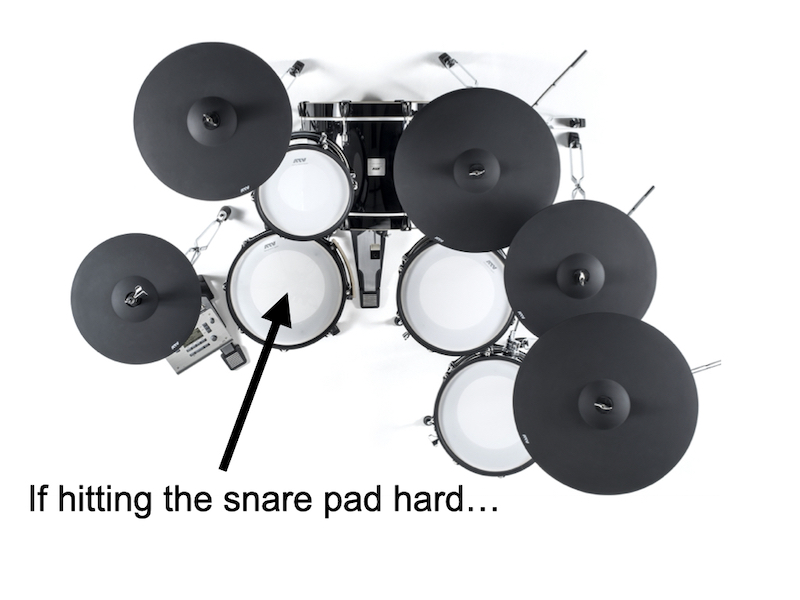 Crosstalk settings also slow down how fast the module reacts as turning them on means the module has to look at all the inputs, analyse them, and work out what was an actual hit and what what probably vibration through a stand or the floor.

The answer is much simpler. “Crosstalk” is when vibration from you hitting one pad travels through the rack or stands, or through the floor, and makes other pads think they have been hit very lightly, and makes them trigger quietly, even though you are not hitting them. 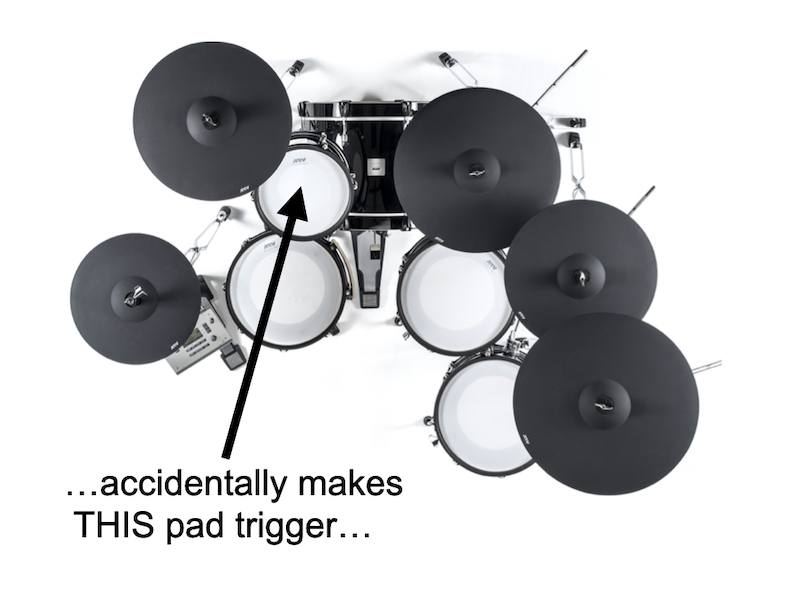 Threshold is the level at which everything starts to be interesting for the module. Any signal which is quieter than the threshold (or Minimum Level if you use Yamaha gear) is ignored. Anything above it is treated as a legitimate trigger signal.

If you raise the threshold on the pad which is being accidentally triggered so the crosstalk, or vibration, from the pad you are hitting is smaller than the Threshold level, then the problem will stop. 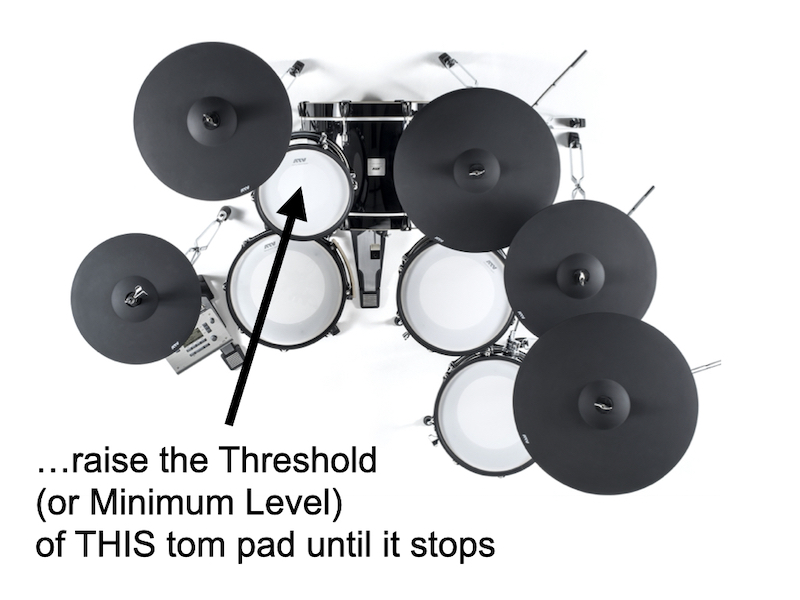 Hopefully thats a bit clearer. Get in touch if you thinks there are some other classic problems which need looking at.