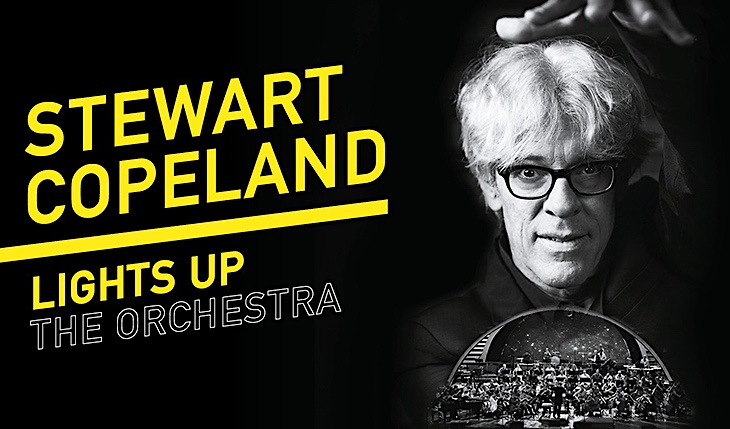 Stewart Copeland will be bringing his ‘Lights Up The Orchestra’ concert to the UK for March ’19 dates. The performance will be a celebration of the legendary drummer’s musical career.

Along with other band members, sticksman Copeland formed The Police in 1977. The rock trio went on to become one of the most internationally successful acts of their generation with successive No 1 albums and playing sold out venues across the globe. In the mid-eighties Copeland began his move beyond the rock arena. With scores and soundtracks as his main occupation, the famous drummer became better known as a composer. Recognised for his uniqueness of style and innovation behind the kit, this concert is a rare opportunity to witness one of the greatest drummers of all time.

The high impact orchestral programme will feature epic music from the post-punk powerhouse songs of The Police to his best-known film scores including Francis Ford Coppola’s ‘Rumble Fish’ Golden Globe nominated in 1984 and Oliver Stone’s ‘Wall Street’. Other works include the musical odyssey ‘Rhythmatist’, music from the much-loved platform game ‘Spyro the Dragon’ and the main theme from thriller ‘The Equalizer’. Co-arranged and conducted by musical director Troy Miller (producer credits – Jamie Callum, Laura Mvula and Gregory Porter).

Stewart Copeland, Lights Up The Orchestra

THE POLICEDon’t Stand So Close to Me • Miss Gradenko • Darkness