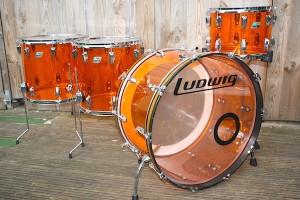 The 31st May 2018 would have been John Henry Bonham’s 70th birthday. Not only was he a truly influential drummer, but also an icon of the drumming, and rock music, worlds.

And when you think of Bonham or Led Zeppelin, which drums do you almost instantly think of? Without wanting to put words in your mouth, it is probably the Ludwig Vistalite, Bonham’s most famous kit being his Amber Vistalite in 26”, 14” rack, 16” & 18” floors. 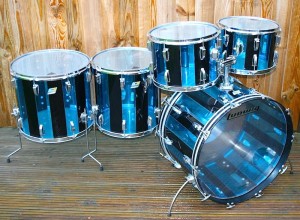 Ludwig first introduced the Vistalite sets in 1972. These formed acrylic shells were available initially in clear, red, blue, green, yellow and amber, with clear and blue being the most popular sellers.

Ludwig were not the first company to produce acrylic shells, with Bill Zickos beginning to experiment back in 1959 and producing his first commercially available kits in around 1968. Fibes were also well known for their acrylic shells in the very early 1970’s with artist such as Billy Cobham and Nick Mason playing their sets. 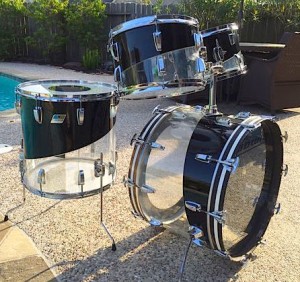 There are conflicting stories on who produced the Ludwig acrylic shells, with some people saying they were made by the Cadillac car company (who had experience forming acrylic for car components), and others saying the shell materials came from Cadillac Plastics (who were not related to the car company). Just to make things nice and simple, there’s an interview with Bill Ludwig II where he says that all the Vistalite shells were made in house by Ludwig themselves(!). 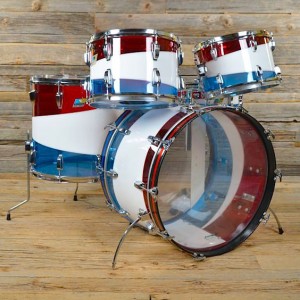 The acrylic shells proved popular with many drummers in varied musical genres due to the shells producing fewer overtones and having more projection (due to their hardness), but also their consistency in humid environments (and from shell to shell). Despite these characteristics, many people felt the Vistalite drums sounded brittle, artificial and lacked the complexities and character of wood shells.

Ronny Tutt (Elvis Presley) helped to develop and co-design Ludwig’s first multi colour acrylic sets, but was reportedly so unimpressed with their sound he went straight back to playing maple wood shells. 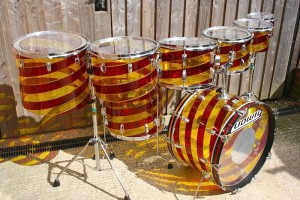 Ludwig increased their colour ranges adding Smoke (translucent black), Solid Black and Solid White in the 1977 catalogue, and dropping Green as it was not a popular seller. But in 1976 they introduced another option which caused a lot of interest, when they bought out multi colour shells and patterns (horizontal, vertical and angled stripes) as well as the Tivoli set. The Tivoli drums were a Tequila Burst set (Red Amber and Yellow horizontal bands) fitted with fairy lights at both joint seams on the shell. 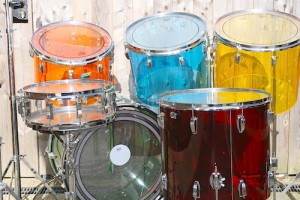 The new shell configurations were split into 6 formats.

These finishes were available in most colour combinations and sizes as well as Ludwig offering the Vistalite Shell across almost all of it’s product range (not tympani), from snares and kits, to marching drums, congas, bongos and even canister thrones.

Due (we believe) to a miss order in 1977, Ludwig even produced a Chrome over White Vistalite shell range to use up the drums.

Whether you like or dislike the way they look and sound, John Bonham’s 1973 introduction to ‘that kit’ really put acrylic drums in the history books.