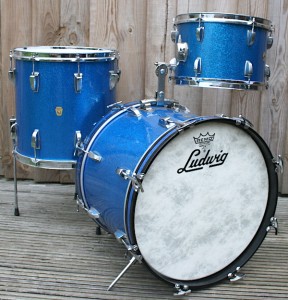 Last month we looked at Ludwig’s Vistalite drums series, and this month I wanted to look a little more closely at one of their harder to find and more often overlooked drum kit models.

The Ludwig Jazzette comprised of an 18×12” deep bass drum, 12×8” rack tom and 14×14” floor tom, built during the 60’s using Ludwig’s infamous three ply poplar core shells. It would seem from catalogue scans taken from the period that the Ludwig Jazzette didn’t make an appearance in print and wasn’t offered as a set up until 1967.

It would appear from these catalogues that Ludwig almost entirely missed the ‘bop’ music revolution as their serious jazz drum kit offering was strangely not at the forefront of this scene. 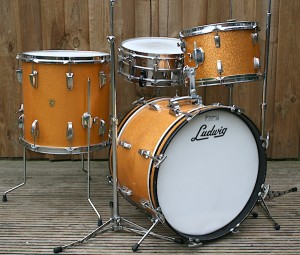 I guess when most drummers think of straight ahead bop drummers and the drums they used, Gretsch Round Badge drums were at the forefront of this style. The move away from the Big Band era and its large 24” and 26” bass drum sets started in the late 1940’s, with artists like Max Roach and Art Blakey.

Whilst this progression was happening, drummers like Buddy Rich and Gene Krupa were still very much in vogue and their name and association in catalogues still sold drums for the likes of Ludwig and Slingerland. Gretsch offered their ‘Progressive Jazz’ drum set (20×14”, 12×8” and 14×14”) with the option of an 18×14” bass drum in their 1954 brochures, whilst Ludwig WFL’s 1956 catalogue led with the Buddy Rich outfit and still had ‘Dance Band’ sets available too.Slingerland’s 1955 catalogue led with the Gene Krupa Deluxe Radio King and the only Bop offering was a convertible floor tom/bass drum measuring 20×18” paired with a 13×4” snare, the ‘Combo Be-Bop’ outfit. 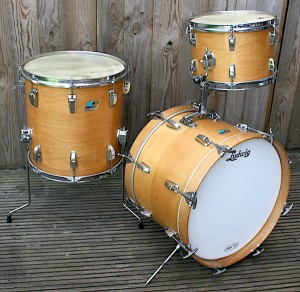 This is not to say that kits weren’t made and no one played a be-bop sized Ludwig in the height of the style. We were lucky enough to purchase a completely original 1963 Ludwig Jazzette Outfit with an 18×14 (not the later listed 12 depth) bass drum. This kit was finished in Blue Sparkle and came with original blue painted bass drum hoops too, rather than the more often seen black. Certainly an unusual kit from the time period!

Ludwig continued to produce the Jazzette, although in limited numbers, through until the late 1970’s or early 80’s when the bass drum size was increased to 20” (known as the Downbeat back in the 60’s and 70’s). Ludwig even made Vistalite Jazzette sets during their acrylic heyday.

It’s fair to say that although often now seen as a collectors item and sold at a premium, the Ludwig Jazzette’s blend of small sizes and versatile 3-ply shell construction make for a very fine and highly useable instrument.