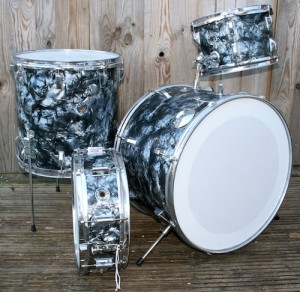 The E.W. Kent Manufacturing Company offered quality drums at an affordable price and although for many they may not have measured up to the likes of Slingerland, Ludwig, Rogers and Gretsch, in terms of construction quality, Kent made some great looking and great sounding drums. 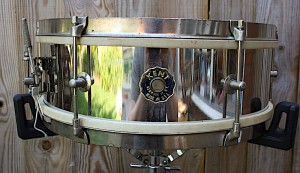 During the 1950’s and 60’s, Kent snare drums and tom toms were constructed of two-plys of maple, providing a very thin and resonant shell, similar to the 3-ply shell construction of Gretsch drums of the same period. Production dates were often stamped inside the drum shells. Bass drums were of six- ply maple construction so they could support the (minimal) weight of the toms.

It is well know that Kent’s maple shell drums varied in construction quality. Some were beautifully finished inside with excellent bearing edges while other drum shells were crudely assembled, with dark brown glue smeared on the inside and virtually no bearing edges.It’s said that no two Kent drums are alike and often lugs and strainers were fitted wonkily to the shell. 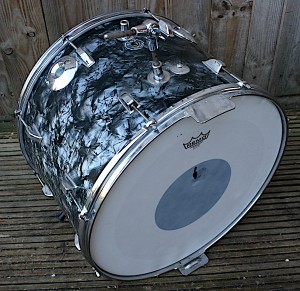 Kent often cut cost corners with hardware and badges too. Whilst other companies at the time used brass badges, Kent used coloured foil ones to keep costs down. Snares and rack toms often had single central-lug designs (when floor toms and bass drums didn’t) or used single tension rod and eyelets designs with single flange hoops and claws.

Whilst some financial corners were cut, the quality of metal used for the lugs and mounts was generally excellent, making good, heavy-duty castings. During the 60’s Kent developed hardware ideas with their ‘Adjust-o-matic’ cymbal arm and tom mount, utilising ball joint and hex rods similar to Rogers.

Around 1967 Kent replaced their bass drum hoops with triple flange versions (seen on our kit) with flat plates top and bottom for pedal and accessories attachment.

During the very late 60’s Kent began to use Japanese import shells (Made In Japan or ‘MIJ’) whilst fitting American lugs and parts to the drums. 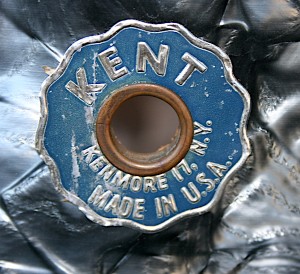 As the fortunes of the company were so apparent (one only had to look at the quality of the manufacturing to see how they were doing), it was probably obvious that they were not in it for the long haul. The company closed in 1977.