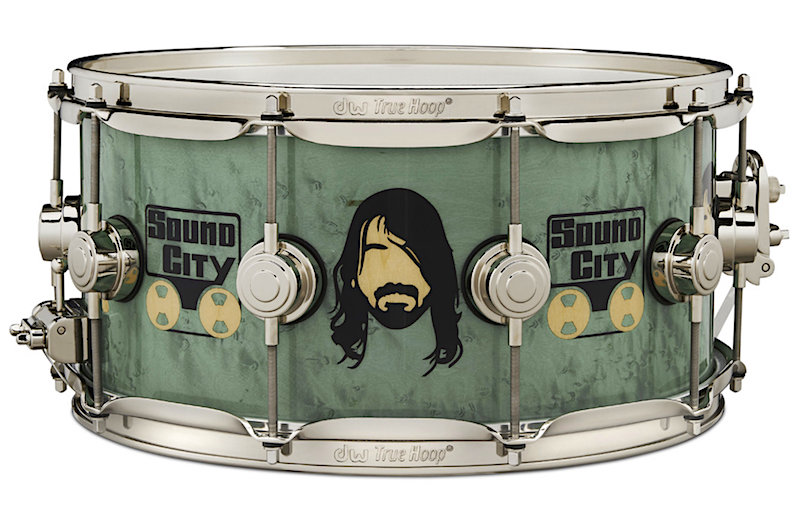 Drum Workshop Inc. (DW) recently announced the addition of a Dave Grohl ICON snare drum to the line. The limited-edition drum recognizes his celebrated drumming career, as well as his long- standing connection with both the legendary Sound City recording studio in Los Angeles, and his beloved Studio 606, where the sacred Sound City console now resides. Grohl’s love of Sound City began when he recorded at the studio with Nirvana on their breakthrough release Nevermind. More recently, Grohl produced, directed and narrated the award-winning documentary of the same name.

The wood inlay artwork adorning the Dave Grohl Icon snare includes the rock visionary’s stylized silhouette, his forearm feather tattoos and fitting tribute to both aforementioned recording studios. Precisely laser-cut from 1/36″ veneers of Black Pear and Sycamore woods, the images are painstakingly hand-inlayed into a background of teal-dyed Exotic Birdseye Maple. The drum is only hand-sprayed with a clear gloss to topcoat—no paint has been used to depict the graphics on the outer veneer. Nickel-plated drum hardware complements the unique, eye-catching colour scheme.

In addition to being a prized collectable, the drum is also highly playable. Crafted at the DW Custom Shop in California, from 11-plies of North American Hard Rock Maple with VLT grain orientation technology; the drum is fitted with True-Hoops™, True-Pitch 50 Tuning™, True-Tone Snare Wires™, MAG throw-off with 3P butt plate and DW Heads by Remo®. A Deluxe DW carrying case, certificate of authenticity and Sound City hat are also included. See Grohl talking about the drum here.

‘We’d been waiting a long time to present this special project to Dave,’ said DW drum designer John Good. ‘When he saw the drum for the first time, we couldn’t have asked for a more amazing reaction. We finally get to share this with the world, and we know his fans will appreciate the thought and effort put into this very special ICON drum.’

Commenting on the new snare drum Grohl said “I’d like to thank everybody at DW, as this is something that blows my mind. I’ve never had my own snare drum before, and this is pretty beautiful.”

Only 250 of the Dave Grohl ICON snare drums will ever be produced—each one will be numbered and signed by John Good. A portion of proceeds from the sale of each snare will be donated to the charity nominated by Grohl, National Independent Venue Association.