The Customs Classic Dark series has been around for a little while now and yet until a few weeks ago I’d never had a chance to play any of them.

This B10 bronze line has a fairly unique look to it, as you’ll have seen. It’s not exactly a raw finish which has been lathed, but from a distance it looks a little like that. The series features clean, modern sounding cymbals with that aforementioned distinct look. For 2021, the range has been extended to include some new heavy models and these are part of what we were sent to check out. We were also sent a mixture of other lines as well which we’ll look at in the near future.

These hihats are deemed to be extra heavy but I didn’t really find them to be overly heavy or unmanageable. As you might expect for heavier cymbals they do produce a nice crisp sound with the pedal and a solid but not aggressive stick sound. I think out of all of the Customs Classic Dark models we were sent, these would be the ones I’d want to keep.

There’s a time and place for heavy (and power) crashes, and that is obviously for those of us who hit a bit harder. And, that’s how these two cymbals really need to be struck in order to get the most out of them. 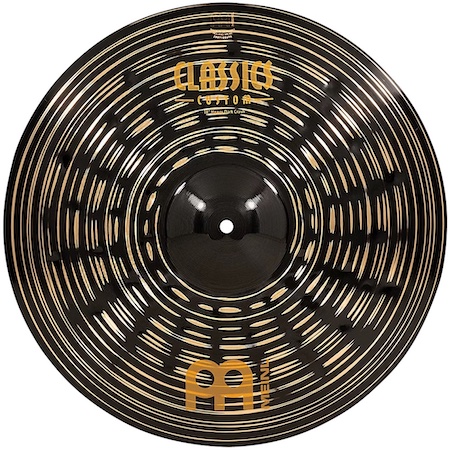 I’m not the world’s hardest hitter and I didn’t really feel these two models needed to be struck that hard for them to open up but I did find the 16” did need to be played a little more forcefully in order for it to speak in full. I didn’t find the 18” needed this quite so much.

Overall though, I liked the sound of both crashes and they work well together. They didn’t feel or sound clunky, like the one or two heavier crashes I own do, and I liked that about them.

Meinl wasn’t the first company to come out with a ride cymbal with a big bell, but it’s certainly taken the concept and run with it, offering a number of different models around the concept. 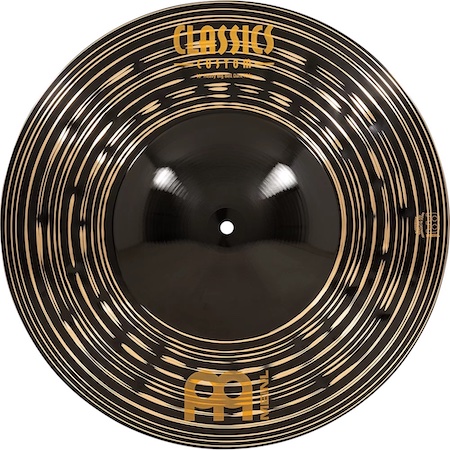 This ride cymbal is definitely not for everyone, and surprisingly, really only does one thing. That said though, it does it pretty well. The bell on this extra heavy cymbal is about half of the overall 18” diameter; it’s almost comedic in that sense and looks like an oversized cup chime. It’s loud, clear and cutting. The bow sound is similarly clear.

I like this type of cymbal – I own a couple with similar dimensions – but for my ear I would actually have preferred it to have been a little thicker so the bow sound is a touch more defined.

This ride has a clear bell, clean bow sound and is crashable. The bell isn’t quite as big as the previous model but it’s still pretty large. 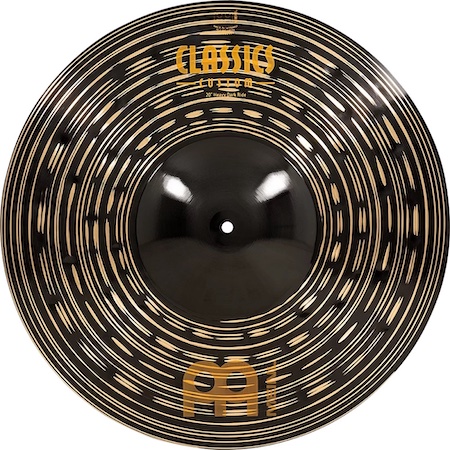 I found it worked nicely with the 18” Heavy Big Bell ride as a pair.

I reviewed the Classics Custom Brilliant line many years ago and really liked them; I actually bought a bunch of them and still have them. I found these Classics Custom Dark models I tried are similar in feel to the Brilliants in that they have the same clean sound and feel to them, but they’re obviously slightly different.

Clearly, the concept of these models is ‘heavy’ but as a whole I didn’t really find them to be all that heavy which looking back at my comments above seems to have been a theme throughout; I don’t think they’re particularly thick and they certainly don’t have any sort ‘clangy’ sound or feel to them. The only exception to this, as mentioned, would be the 18” Heavy Big Bell ride which I would have loved to have been just a little thicker to provide a more defined overall ping.

I also wouldn’t really describe them as ‘dark’ in the more usual [cymbal] context of the word. I think they’re ‘darker’ in the context of what they are, rather than them being just plain dark like some of the other models Meinl produces. Still, they’re nice cymbals for the bracket that they’re in , seem to be good value and as a whole I quite liked them.

More details over at – https://meinlcymbals.com/en/cymbals/ClassicsCustomDark