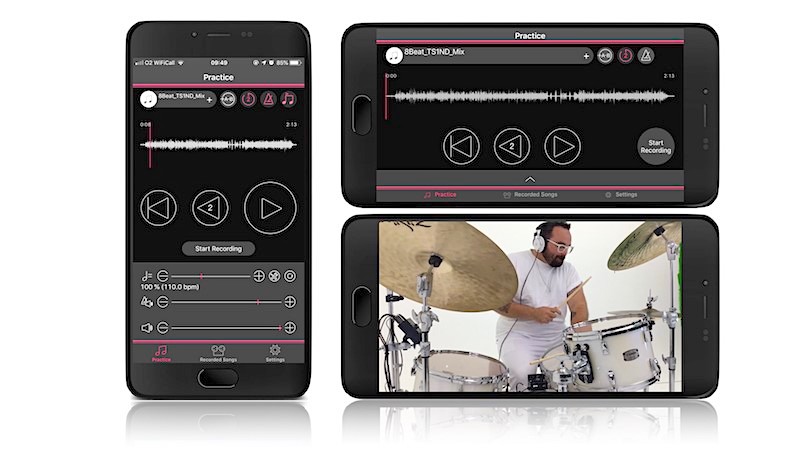 Ever since its introduction, the award winning Yamaha EAD10 acoustic-electronic drum module has captivated drummers around the world. A part of the musicians’ fascination with the system is enhanced with Yamaha’s Rec’n’Share app for shooting and editing videos of performances and sharing them on social media. Rec’n’Share is a free app and is now also available for Android, so drummers using the widespread OS can also get the most out of their EAD10 and their drums in general.

The Yamaha Rec’n’Share app meets the needs of modern musicians who extensively use social media to share performances or drummers who want a simple and effective way to capture their Drum Sound for Studio or Live work. Combined with the EAD10 drum module, the app allows for recording drum performances and sharing the videos through social media channels like YouTube or Facebook. iOS users are already well acquainted with the app’s potent feature set – and now Rec’n’Share is also available for the Android operating system.

Even without EAD10 hardware, the Yamaha Rec’n’Share app has a lot to offer. Songs stored on the device can be played back and a click can be added. Tracks can also be tailored to different player levels by changing playback speed independent of pitch. Particularly difficult sections can be looped for more efficient practice and eventual mastery.

The world is the stage: recording and sharing with Rec’n’Share

Once the Rec’n’Share app is connected to a Yamaha EAD10 module via USB, drummers can use the Android device’s video feature with the EAD10 sound, adding outstanding drum sound with the EAD module’s effects to the video. Recorded material can then be trimmed and edited before being stored locally, uploaded to Dropbox or shared through social media.

Get the most out of your drums with Yamaha EAD10

The Yamaha EAD10 drum module bridges the gap between acoustic and electronic drums. The EAD sensor is attached to the Bass Drum. It then captures the Bass Drum itself through a trigger unit while recording the entire drumkit with two integrated microphones. These signals can then be refined with the EAD module’s effects to create a high-quality, polished drum sound. The result is transmitted to the Rec’n’Share app on iOS or Android via USB connection to be used for professional videos on social media.

The Yamaha Rec’n’Share app is available immediately for iOS through the App Store and for Android through Google Play. The app is compatible with the acoustic-electronic drum module Yamaha EAD10 and the DTX402 series e-drum kits. More information on Rec’n’Share: