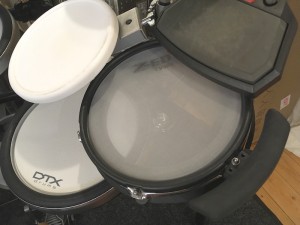 Ok, so its not what I said we’d look at this time, but in the last few days a crosstalk issue cropped up with someone who got hold of me through the site for advice, so I though it would be fitting to have a look at it.

So Crosstalk Rejection (or Crosstalk, or Xtalk, or SpRej) is another thing you’ll have probably seen on the screen of your module and (like most people) wont really understand what it really does. However, this is the one parameter that seems to get people wrapped up in problems faster than any other.

Does this situation sound familiar – you hit two or more pads, say kick, snare and crash, all at the same time, and one of them, lets say the crash doesn’t make a sound? You hit the crash pad by itself and it works fine, but occasionally, when you hit all three, it doesn’t. Weird!

This is caused by having the Crosstalk Rejection set too high.

But what is Crosstalk? Well, if you have two pads on the same stand and you hit one hard, the impact vibrations travel through the stand and are large enough to make the other pad (the one that hasn’t been hit) play as well. That could be an issue if one pad has a nice delicate bell-tree sample on it, and the other a nasty, vicious China sample. So this unwanted triggering caused by stray vibrations is Crosstalk. And Crosstalk Rejection is the parameter used to get around any crosstalk issues.

Now, before we go any further, I should point out that if you have your Gain and Threshold correctly, you (generally) shouldn’t need to use your Crosstalk Rejection settings – in my experience 99% of problems can be circumvented by tweaking the Gain and Threshold. However, there’s always the odd occasion when nothing else can be done and you need to get in a little deeper.

If you do have a crosstalk issue (and you are sure your Gain and Threshold are correctly set), then there are a few things I would recommend before you start tweaking the Crosstalk parameters;

Firstly, try and separate the pads so they aren’t on the same stand or rack. If this isn’t practical try tightening or loosening the mounting bracket, so the vibration path (the route of the vibration through the stand) is changed slightly different. This could be enough to stop it.

Secondly, if the above didn’t work, try a different style/make of pad, or use a pad which has built in suspension, like the Dauz pads or the Yamaha XP80, 100 or 120 pads.

So assuming these options don’t work, and as a very last resort, try raising the threshold of the pads which are having the issues (the ones which are being set off accidentally) until it stops. Then play the pads you just raised the threshold on and see if they are now unusable in the way you want them to work (ie do they work correctly on all the tracks you need them for?). If this does work, then what I said above applies – adjusting the Threshold works in 99% of cases! If they don’t work as you want (ie they are not sensitive enough now), then put the threshold back to where it was (you did make a note of it didn’t you?). Then go to the Crosstalk Rejection page.

So what the actual Crosstalk Rejection does is it listens to the inputs and compares them, and if it thinks that one of the signals is close enough to another and might have been caused by vibration, it will stop that pad from making a sound, if it is lower than the level which you set. You can obviously choose which pads it looks more closely at – you can normally find a setting/grid which says something like “Reject vibration from pads 3, 4, 7 and 8” or something like that.

So say you hit your Tom 1 pad and Tom 2 plays as well, then you go into the Tom 2 channel and (depending on the make of your module) tell it to ignore any triggers on the Tom 2 channel that happen at the same time as the hits on Tom 1, if they are quieter than the amount of Crosstalk Rejection you dial in.

But, and this is another reason to avoid using Crosstalk Rejection at any cost, Crosstalk Rejection costs you time. And what I mean by this is that to work correctly, the module needs to compare input signals and work out what got hit when and if it could be caused by crosstalk. This takes time, albeit milliseconds, but if you module boasts about its amazingly fast response, then by using Crosstalk Rejection, you are seriously degrading the response time of your module (if your module generally works quicker than 5ms and the input rejection comparison adds another 1ms, then your system has just slowed down by 20%).

When tweaking Crosstalk Rejection, the best rule of thumb is to go slowly. Don’t feel tempted to whack it all up as you’ll get the sort of problems we talked about at the top when rather than firing without you hitting them, some pads might not fire at all when you hit them at the same time as other pads. So just go slowly and nudge up the Crosstalk Rejection setting a little at a time until the system performs better. You can always go back if you do too much.

If you do find yourself on stage with a seriously misbehaving system (we’ve all been there), having adjusted the Crosstalk Rejection too high, then there is one bit of advice I can give – start to play sloppily. If the system is expecting pads to be hit at the same time (and its cancelling some of those that are being hit), then by playing open flams (both hands not playing at exactly the same time), you might get just away with it. At times like this you just have to ask yourself – what sounds better – playing like I’m drunk but hearing all the correct sounds, or playing really tightly and missing important samples?

One last thought is that sometimes you might not want to use Crosstalk Rejection, especially if you are triggering more natural, acoustic sounds. This is because acoustic drum kits have naturally terrible crosstalk – if you hit your acoustic bass drum hard, then the toms ring and the snare buzzes. This is natural crosstalk and we take it for granted. It even makes the kit sound more natural, or ‘real’.

If you want to try this ‘natural crosstalk’ on your electronic kit, just lower your thresholds enough (or turn them off completely), and you can get it to behave in a very similar way. However (and this is very important), while it might make the kit sound slightly more realistic when set up correctly, it seriously kills your polyphony (remember the last article?). Your polyphony could easily drop from 64 notes to 8 notes or less (as your one bass drum hit is also causing your toms and snare to trigger too), so be careful. I wouldn’t recommend gigging with a ‘all thresholds off’ system, but its interesting to try once(!).

As with all these thing, there are little tricks you learn as you go along which can really help. The more time you spend with a particular kit, the more ways you learn of getting out of problems, and the more you can recognise problematic situations before they become an issue. With electronics, every day is a school day.

And people think this electronic percussion thing is easy, huh?