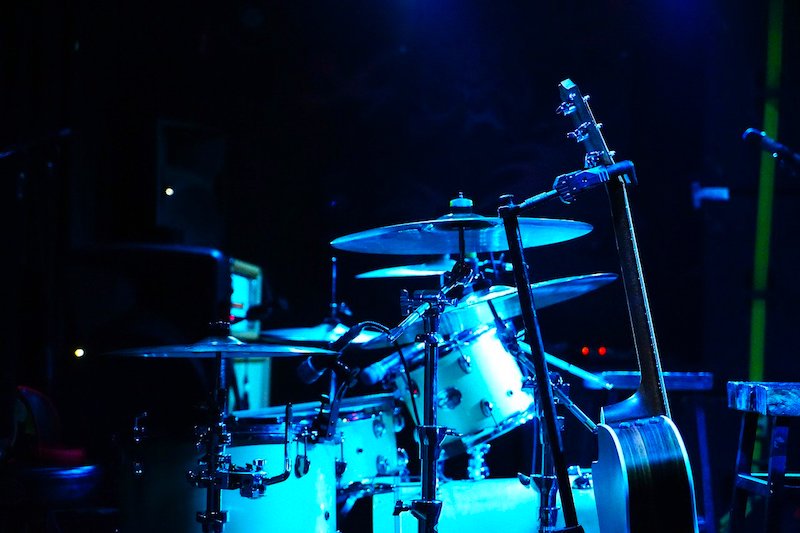 Acoustic? Or electronic with real cymbals?

If you ask 100 drummers what they like about using either electronic kits or VST drum plug-ins, they will tell you that they love the variety of drum sounds, the ability to play the sounds of rare of vintage drums and all that sort of stuff. If you asked them what their biggest dislike about electronic kits, or plug-ins played from electronic kits, it’s usually the hi hat and the cymbals which come up for most criticism.

While the cymbals on most electronic kits aren’t going to worry the big cymbal manufacturers, the actual sounds of the hi hat and cymbals on Superior Drummer 3 and Addictive Drums, and lets face it, pretty much all plug ins, can sound amazingly lifelike, and it can be difficult on recordings to tell what is real or programmed if done sympathetically. However, the big issue, and why it’s ‘not right’ for drummers, is the actual playability of the sounds, when ‘played’ from pads.

The hi hat is probably the hardest instrument to mimic electronically. There’s so many little nuances and changes that we make to the hi hat as we play it – varying the pressure with our foot, or moving the position of the stick slightly – that the technology hasn’t caught up. Yes, there’s some kits which come close, but we’ll only know they are good enough when drummers start to take electronic kits to ALL gigs over their acoustic kits… and I’m not going to hold my breath for that.

We’ve got used to how electronic cymbals ‘play’ but they aren’t the same as real acoustic cymbals. Yes, modern developments are pretty impressive, and the digital ride on the latest Roland kits is interesting to play on, but its not the same, regardless of what anyone tells you. Again, the sound may be almost there, but the playability isn’t.

The crash and ride cymbals are usually much easier to mimic than the hi hat. But if you think about your typical ride cymbal, the sound varies minutely as the stick moves over every square centimetre of the surface of the cymbal. Some sounds are more obviously different (the bell to the edge for instance), and some sounds are much more subtle (one side of the logo to the other), but you never, ever get the same sound out of a cymbal twice.

So if cymbals are difficult to recreate electronically what can we do about it?

Well, we are all fairly happy with the sound of sampled drums – thousands of drummers every day use plug-ins connected to their electronic kit to provide a drum sound for tracks and/or practice. If you turn on your typical commercial radio station, you’re probably hear sampled drum sounds from plug-ins on most of the tracks. In most commercial music nowadays, it won’t be a drummer sitting behind a five piece kit in the studio somewhere who provided the drum sounds. It will be a programmer or producer who probably replaced all the drum sounds of the performance (plus adding a few tweaks themselves) after the event. 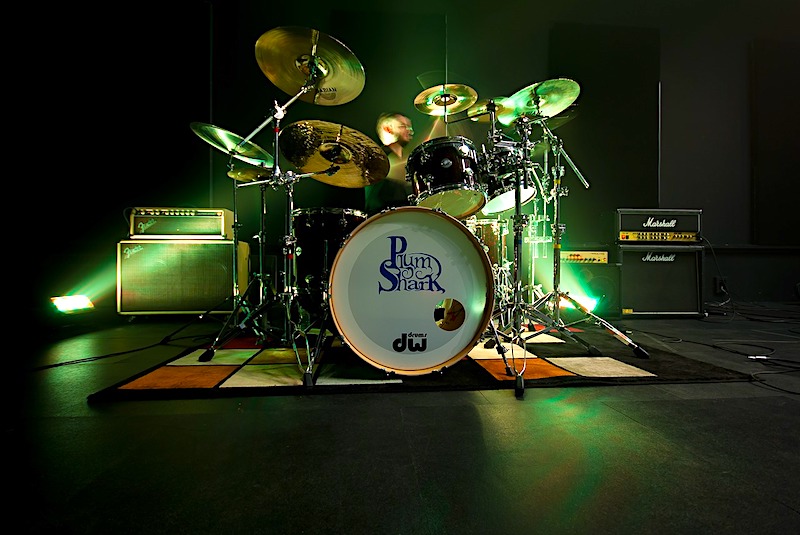 What about this one? Acoustic? Mesh heads triggers and real cymbals?

If you’re practising at home, playing electronic cymbals – rubber pads or low volume metal cymbals – is okay, but it’s not the real thing. I remember having lessons with my drum teacher for many years and for the first six months or so, trying to justify to myself that me practising on an electronic kit was okay. It wasn’t. He was teaching me how to actually play a ride cymbal, not just hit it, and how to draw the sound out of the cymbal by utilising the stick. You just can’t do that on a rubber cymbal pad. I needed to practice on a real ride cymbal.

So maybe, what we ought to do is look at this from a sensible, new direction. If we are happy with the drums sound and playing pads or drums with mesh heads and triggers on to generate them, but not cymbal pads, why don’t we just use real cymbals? After all, we have spent lots of money buying them and if we are doing a recording, why not use those real cymbals?

I remember the first time I did a recording where I was asked to bring my cymbals but used an electronic kit for the drums, triggering a plug in, and I couldn’t quite believe the realism of the finished product. By generating the drum sound from a plug-in, we had complete control over the acoustics, the drums, the effects and everything else. And to be honest, cymbals are much less influenced by the overall room they are being played in as they don’t have so much of a transient (attack) which is what highlights the acoustics of a room. So, you can record like this in a room with less than perfect acoustics, meaning you can do it in a bedroom, or somewhere else that isn’t Abbey Road.

So with a bit of careful thought, you can trigger drum sounds off pads, play real cymbals, which you pick up with overhead microphones, and blend the two together to come up with some really realistic sounding drum tracks.

Yes, we might not have the convenience of being able to change the ride cymbal sound after the recording, but surely we’ve only got used to this because we’ve been spoilt by the technology? If we actually have to get a good performance down in the first place then maybe that will encourage us to put in a bit more effort into the actual recording process.

Also, as I mentioned earlier, because you’re using your cymbals and you are generating your sound using your sticks it sounds more like you. 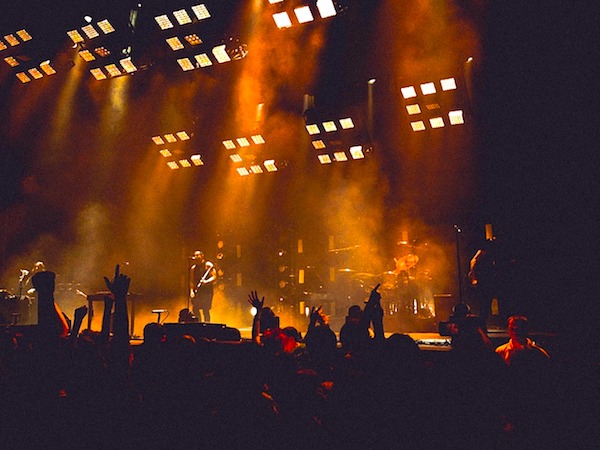 And this? Surely this MUST be acoustic…? Can you tell?

Obviously this is nothing new. Back in the 80’s and 90s electronic kits had rubbish cymbal sounds, if any at all, and so it was fairly common to see a drummer using electronic drums with real cymbals. The first time I heard it being used live was on the Mike Oldfield Tubular Bells 2 live gig at Edinburgh Castle in 1992. Ian Thomas was playing a ddrum kit with real cymbals and if I had my eyes closed I would’ve just imagined it was a real acoustic drum kit, albeit processed (as fitted the drum sound of the time).

This is getting more popular now too. I am often approached by bands who have to play in venues with sound limiter so they use electronic kits. However, many drummers dont like the restriction’ (their word) of electronics so they ask what they can do about it.

As its generally the drums which triggers the sound limiter (loud transients at mid to low frequencies), it makes sense to use electronic drums, just to keep a check on it. But using acoustic cymbals feels more real and generally drummers are pretty good at adjusting their cymbal playing to match the drum volume (which they don’t have control over). Plus it looks better.

And this is one area that acoustic cymbals have a distinct advantage over electronic cymbals – they do look so much better. Dark rubber cymbal pads can look rubbish, especially if you are a drummer, and they generally come in slightly smaller sizes than we would generally use so if you are a drummer you can very quickly tell with a quick glance at the drum kit whether the drummer is using real or electronic cymbals. If they’re electronic cymbals, then it’s likely to be an electronic or triggered kit as well. So very quickly, the whole ‘acoustic/electronic’ story unravels. But with real cymbals, and acoustic drums with mesh heads and triggers, it’s much harder to tell.

Yes you might be saying “I don’t want to spend money on microphones to mic my cymbals and surely it must be hard difficult?” Well, no not really. You can get a really good cymbal sound just with a pair of (not expensive) overheads in a spaced pair or XY position (Google them if you are unsure) or if you are particularly lucky, use the Glynn Johns method for a very natural, but simple two mic cymbal recording set up, but Glynn Johns does require more space around the kit, so doesn’t always work. Put the overheads into a mini mixer and dial in as much as you want, and away you go.

Drummer generally want their hi hats mic’ed as well, but again if you listen to commercial radio you very rarely hear the hi hat and the hi hat is not an integral part of the groove to the audience – it’s the kick and the snare which make them want to dance.

So overall, what I’m saying is if you use electronics live, or for recording, and you are unhappy with electronic cymbals, either the look all the sound of them, then why not try using acoustic cymbals with your electronic drums and get the best of both worlds?

If you’ve never thought about it before, take my word for it, it works. And it works very well with a little bit of planning and thought. And it makes you sound more like you, and unlike a wholly electronic kit, you’re getting sound back off the cymbals rather than just a dead thump, which makes for a much more pleasant playing experience.