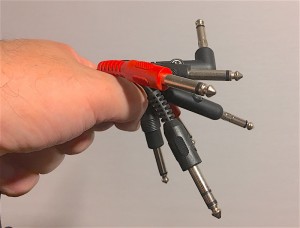 Does this leave you cold…?

Welcome to the first ‘Seriously Wired’ Blog for mikedolbear.com. In this series I want to look at electronics, how they can be used, and most importantly how they can help you!

For most drummers, electronics are a bit of a (as we say in the UK) ‘Marmite’ situation – you either love them or hate them. I meet loads of drummers who ‘hate’ electronics (and I use the word advisedly), and I meet just as many (if not more) who cant imagine life without them, and would probably say they ‘love’ them. Those who don’t like them feel that electronics aren’t real drums, aren’t ‘proper’ and I can appreciate that and agree to a point – they aren’t a replacement for acoustic drums.

Electronic drums are merely a tool to allow people who hit things with drumsticks (ie us drummers) to do things quicker, quieter or to sound different.

But not everybody thinks so. How many times have you met a keyboard player who says

‘I don’t use modern keyboards – they’re cheating and they sound rubbish. I only use acoustic pianos built in America before 1970‘?

You haven’t I bet. And if you did you’d probably think they were a ‘special case’ and politely ignore them and walk away. Generally keyboard players are pretty open to technology.

But I’m sure we’ve all met drummers who go;

“Electronic drums? Pah! Rubbish! Total Rubbish! That’s cheating that is – makes a rubbish drummer sound good. Wouldn’t touch them with a barge pole. They cant sound like my Premier B303 from 1968 can they? I’ve still got the original heads on too!”

I know I have, many times. For some reason, some drummers (thankfully not that many) just aren’t open to new things (New? Electronic drums have been around for at least 70 years now!). 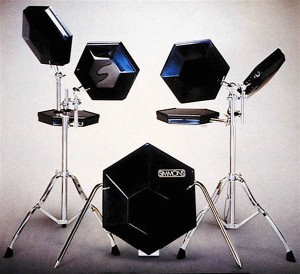 Is this what you think of when someone says ‘electronics’? If so, you need help from Seriously Wired

To be perfectly honest, electronics have permeated every single facet of drumming life now, whether we like it or not, and there’s no way of getting away from it. From using a metronome app on your phone to count you in on a function gig, to using an SPDSX to trigger samples, to replacing your dodgy drum sound from the recording you did in your front room with something that was recorded in British Grove Studios (using EZdrummer 2.0), to practising at 3am as you cant sleep (using any available electronic kit on the market), its all there for us to use.

And its not just pop drummers and bedroom players either. I’ve talked to seriously busy drummers and percussionists who use electronics to record orchestral snare drum parts on film soundtracks, or used triggers on timpani to achieve certain effects. Its being used out there all the time.

We’ve got SO MUCH technology available to us now that it can be a bit daunting, but it doesn’t have to be. Hopefully over the coming months we’ll look at different aspects of electronics so you can go “Ahhhh! Now it makes sense! That bit of gear is just what I need” or “Ah! So thats why my second tom plays a china cymbal sound when I hit it hard!” or whatever it is.

One thing that has become obvious to me since I started talking to lots of electronic drummers as I travel around is that we all have the same issues – things not triggering properly, not sounding how we want them to sound and so on. These are usually very simple to cure, so we’ll look at those too.

So here we go – see you next month and we’ll start looking at bit more closely at these things we’re hitting.

And for those of you who want a bit of something fun, check this out – Nir Z with Superior Drummer 2.0 back in 2009 (8 years ago!!!) on a Hart Dynamics kit. Great player, great sounding kit, and all the audio is coming out of his laptop behind him…

And for something a little more highbrow, Pete Lockett with an ATV aFrame. To be honest, anything Pete Lockett touches sounds great – kick back, put this on and chill out…