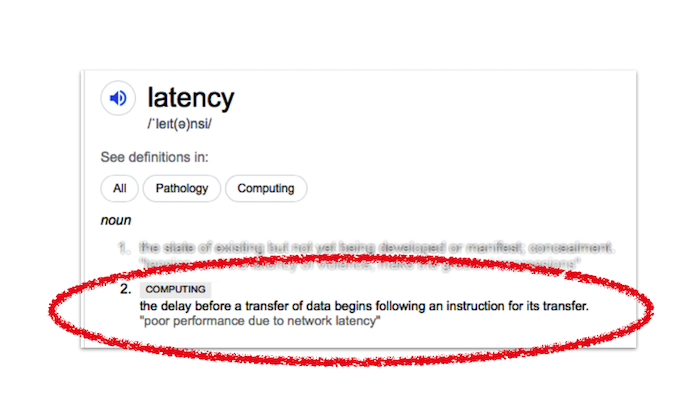 OK, I’m surprised I hadn’t covered this, but it appears I haven’t, and it is VERY important.

If you use ANY electronic or mechanical gear, you experience latency.

Latency is the time it takes for something that you are using (a car, a toaster, a clever bit of electronic drum gear) to react to you telling it to do something. Of course, everything is relative, and sometimes… most times, it doesn’t matter, but sometimes it does, and we drummers get VERY hung up on it.

If you use an electronic kit with a computer to trigger a VSTi plug in such as Superior Drummer, Addictive Drums, SSD5, BFD etc then you experience latency when you hit you pads. Depending on the system you have (computer, spec, interface etc) it might not be an issue at all, or it might be a complete nightmare.

Latency is caused by systems reacting to instructions. If you think about it, (and this is massively simplified) you hit the pad, the analogue (voltage) signal goes down the cable to the module, is analysed, is converted to a digital data signal, is processed and the CPU of the module sends a piece of MIDI data down the USB cable to the computer. Here it is analysed again, the CPU of the computer decided what needs to happen, a piece of audio data is checked for location, if its already in RAM, the data is sent to the USB port, if it isn’t, its location is found in the SSD of your computer, is moved to the RAM, and then moved to the USB port. At the USB port the data is shipped down until it gets to the audio interface at the other end of the cable. Then is it processed by the DA (digital to analogue) converters and turned into an analogue audio signal. Then the signal passes out of the interface and sent down the audio cable until it gets to the PA speaker. Then the data is converted into an audio wave, which passes through the air (losing speed as it does) until it hits your ear drums, where upon it is converted into something your brain understands as music.

And all that happens in a fraction of a second… and I mean a fraction. Say 10ms? 5ms? Less? (and remember that a millisecond is a thousandth of a second… so thats pretty quick)

So in a way its not really a surprise that it takes time – there is a LOT to do, and remember that is EACH time you hit the pad, plus the computer is doing 1001 things in the background to get data to the correct place, check itself… download your Instagram feed, and receive an email from your mum.

So why do we get hung up about it? Well, its one of those things where faster is better right? Well, yes, but not always. Ages ago I set up an experiment where I had a drum module that had different latencies on different pads (it was surprisingly easy to do). And in my experience, it was only at the higher limits that drummers could tell which was slower. At fast latencies, drummers couldn’t generally tell difference between 2.5ms and 15ms. They could tell it felt different, and in some cases ‘nicer’ apparently, but they were hard pressed to tell which was which, so don’t believe all the BS put about by companies to get you to buy something. It is important, but only if you can recognise how important it is to you.

Plus life is full of massive latencies – the next time you are at a big stadium gig (hmmm… as if – this was written during Covid19), just notice the latency between when the drummer hits the snare and when you hear it. It could be 250ms, 500ms maybe, or more, much more, depending on the size of the gig, but as long as we get all the music to our ears at the same time (and we do generally) then we are happy. Suddenly getting hung up about a 2ms difference in a spec is a bit silly.

We’ve all done gigs in big venues where there is a slap back echo from the back wall. After 20 minutes, you don’t even notice it – and that is the point. The human brain is FANTASTIC as adjusting to different latencies, as long as they are fairly constant. If they are are constantly changing (like a really cheap electronic kit with a crap processor) then it becomes really difficult to play, but if its the same, roughly, from hit to hit then we can adjust quite quickly.

(If you want to read more about this, search out Jon Atkinson’s great article on practical latency in the August 2016 edition of Digital Drummer magazine)

So what can we do to improve out computer’s latency, for it is here that we as digital drummers most commonly experience concerning latency? Well its easy, you just have to remember two things;

SO ALWAYS BUY THE FASTEST COMPUTER YOU CAN AFFORD!

…and don’t try and use your Mum’s ex-works Windows XP laptop that her office threw out for running your drum VSTi. It just wont be fast enough.

And what about “get the data in and out as fast as possible”?

Well, it doesn’t matter how fast your processor is if the processor cant get its hands on the data it needs to work on, so you need to get the data moving around your computer as fast as possible.

-Use SSD, not spinning hard drives in your computer. These are much faster, and consistent in delivery speed than a spinning platter/ old style Hard Drive.

-Have plenty of RAM (but don’t go crazy – 8Gb is plenty if you are just running a single VSTi – SD3 can run in 4Gb, plus you need more for the system to run smoothly). RAM is like a filing cabinet where files and data are stored temporarily so the computer can access it quickly. Data is moved from the SSD to the RAM if the computer thinks it is going to need it. If the computer has to juggle a load of data around before it finds your beloved Black Beauty sample, it will be slow. RAM is like very fast ‘swapsies’ memory.

To give you an idea, on my MacBook Pro 2012, with a Focusrite Scarlett interface (other brands are available), I can get output latencies of around 2.5 ms or less. That means, from when the computer has its hands on the data to when it can get it to the cable to go to the audio interface is about 2.5ms. That works for me live.

Ignore the ’round trip’ latency you might see on the VSTi settings page as, unless you are using microphones, you wont need that figure. Most data comes into the computer from your electronic kit over a USB cable is MIDI, which is already digital data, so no conversion is necessary.

I was using a MADI system with a large well known band last year that ran 16 channels of Superior Drummer 3 audio data (each drum and cymbal source separately) to Front Of House at just under 1ms, but that was a serious set up, and would be overkill for the average pub gig. But it gives you an idea what the ‘big boys’ use.

But on top of these figures, you need to remember that it takes the average electronic kit a couple of milliseconds to convert your pad hit into a digital signal to be sent to the computer to trigger the VSTi.

So don’t get too hung up on latency, but get it as low as you can by buying sensibly. And, I’m afraid you can really scrimp on spending if you want low latency.

I hope you’ve found that useful. Judging by recent posts online, there is a lot of confusion about latency, but just remember the two pointers;