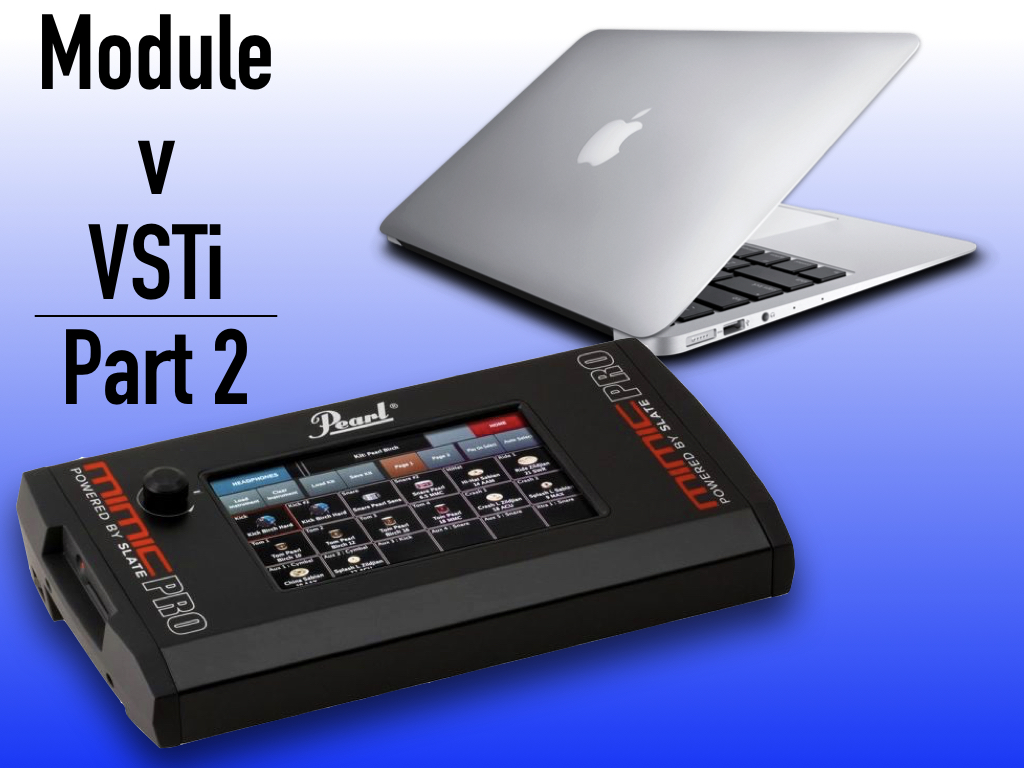 Ok, so we left off last time talking about the fact that modules (or rather most of them), have limited storage for the samples, and computers have much more, but thats not strictly true as we’ll see.

Before we go on, there’s one very important thing to think about. Acoustic drums will NEVER sound the same twice. Ever. Because it is acoustic, each hit, regardless of how accurate the player is, will have differences that you’d probably need an oscilloscope to see. This is because everything on an acoustic kit wears out every time it is struck – the head, the stick, the bearing edge etc plus the acoustics in the room will be different – the breeze may be pushing the sound slightly away from the microphone, or the flapping of the drummer T shirt changes the reflections in the room. Yes, it really does get that reliant on minutiae, without even considering the skill of the drummer. So to recreate this, drum modules use lots of samples to try and recreate the sound of an acoustic drum, and all these samples need storage, or memory.

There are a few drum modules out there that use cheap memory and use it in a very efficient way. If you ever play with a 2box Drumit 5 or Drumit 3 they use cheap SD cards for their memory (and they can handle up to some pretty big capacities too). The lowly SPDSX also uses SD cards and it loads samples from the card to the RAM (quick access playback memory) every time the patch is changed, which explains the delay you get when changing large patches. Incidentally, these cards can be replaced with a larger one for a fraction of the new price. There’s plenty of DIY videos on YouTube if you want to have a go.

But the 2box has one distinct advantage in that it was programmed by a rather clever Dutch guy, who now lives in Sweden, who we’ll call ‘Rik” (because that is his name) who devised a way of streaming sounds off SD cards in real time, so it almost acts like an instant access computer hard drive. This means the 2box can start to load large samples almost instantly, and start to play them back at the same time too, before that whole sample has fully loaded, in effect streaming th sample off the SD card in real time, whereas other SD based devices have to load all of the sample into RAM before it can play back any of it.

That is really clever. Is ‘Rik’ a rich man from all the edrum companies biting his arm of to get this technology which would drastically improve their products? No, he is not… Thats the edrum business for you.

But anyway… on with ‘computers’. 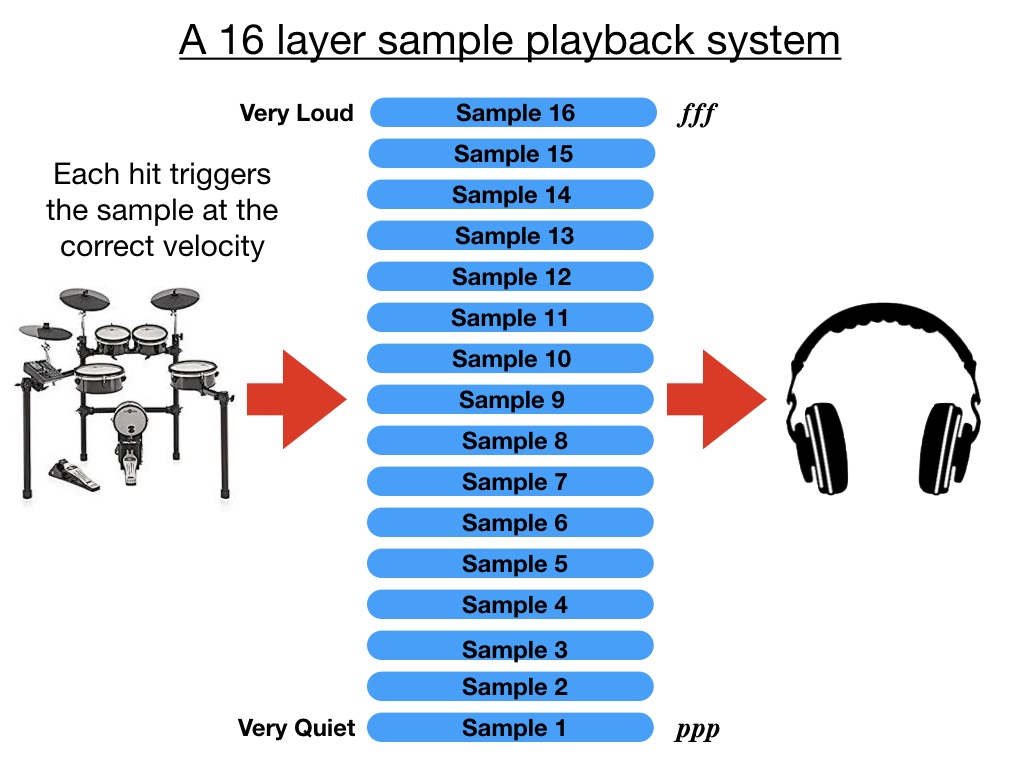 So your lowly laptop has infinitely more amounts of storage than your drum module, which means it can store lots of your lovely drum samples. It probably has an SSD (or solid state hard drive) meaning it can fire information off incredibly quickly without having to find it like an old ‘spinning platter’ hard drive would. This makes it perfect for big drum and cymbal samples.

What these VSTi programs do as well is load the samples you need into RAM (the even faster action memory where your computer stores stuff it needs quickly), so its all ready to fire the correct sample when you hit the edrum kit that is connected to it. It does this in a few milliseconds – I was using a system a few months ago that reacted to the midi information coming into it and fired off the sample in just over 1ms, but that was an exceptional (and expensive) case, and is actually faster that the sound would get to your ears if you hit an acoustic drum with a stick. 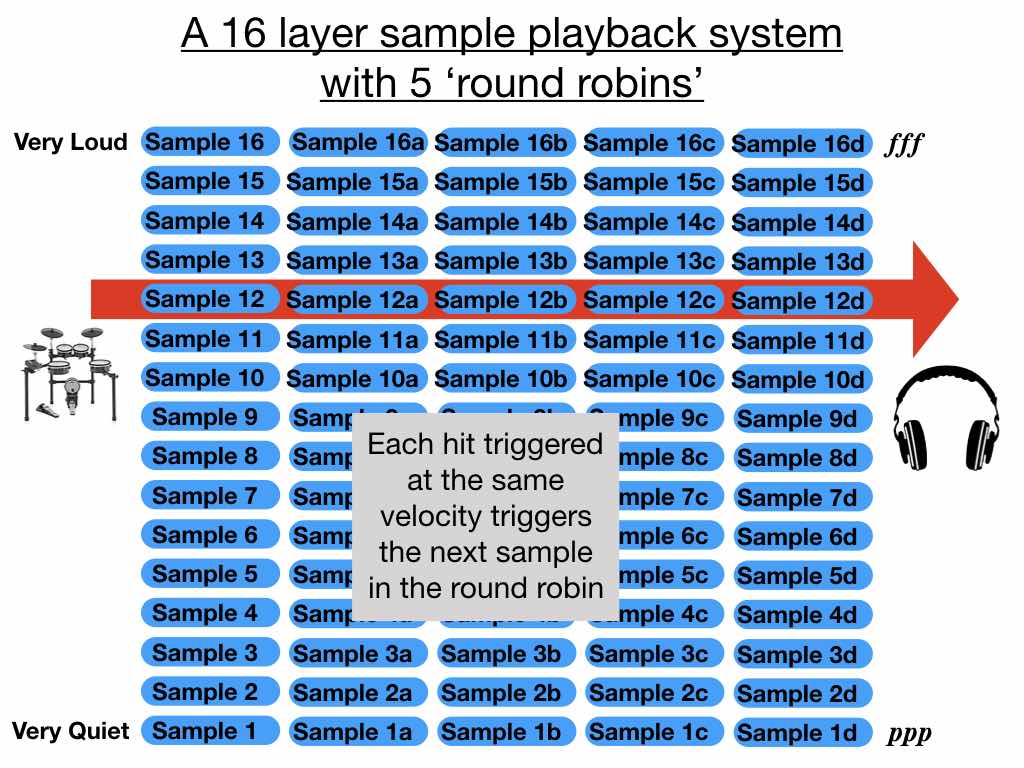 Now the one module I’m not talking about here is the Pearl Mimic, which is almost like a dedicated computer running a special cut down version of Steven Slate Drums 5 (SSD5) in its own dedicated box with trigger inputs and audio outputs, as this is closer to a computer than any other module currently on on the market. However, although it is a superb module with great audio quality, it runs less layers than a computer running the ‘full’ version of SSD5 (plus it cant do your tax return, surf the web, and show you picture of kittens in washing machines), so a MacBook running SSD5 will give you greater audio detail, but not by that much. The Mimic really is unique at the moment.

But where as most modules have a ‘few’ layers – and I mean here different samples for different volumes – VSTi often have loads, because they can – they have the hard drives to store is all. One VSTi talks of its 256 layers, which is probably overkill, but should be applauded for dedication. I cant imagine how long the studio sessions were – “Can you hit it a tiny bit harder please? Only another 236 to go!” 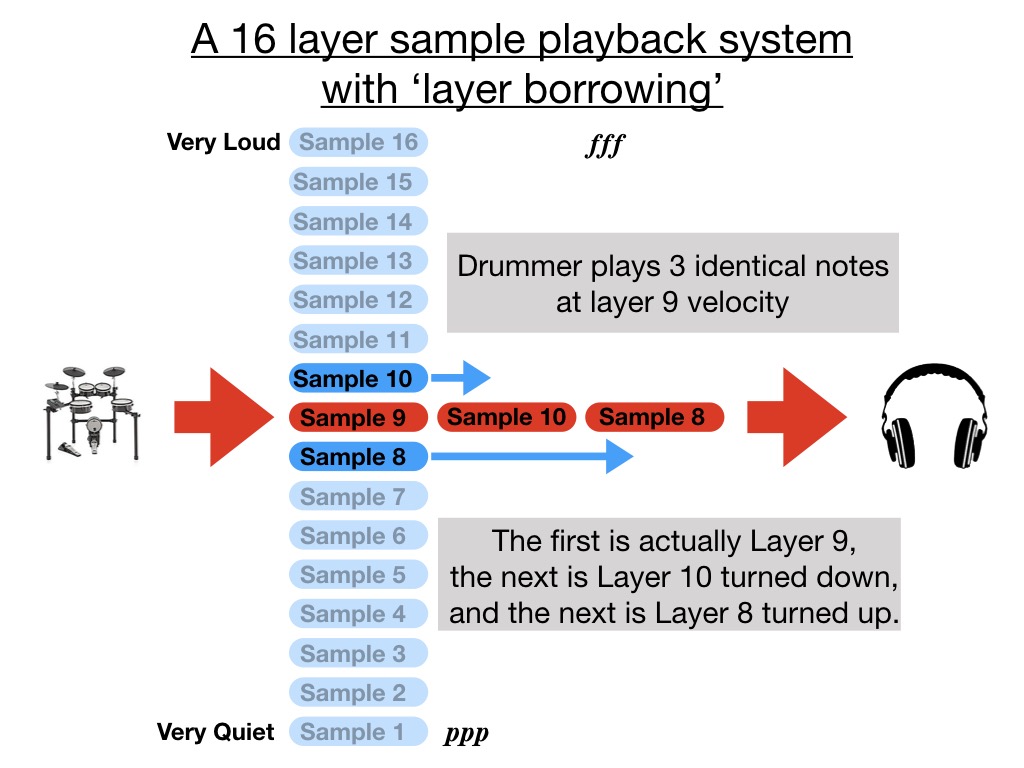 But as well as the layers, there are also the ’round robins’. These are multiple strikes for the same layer, so that even if you are accurate enough to hit exactly the same velocity twice in a row, the two hits will trigger slightly different samples. For some reason, companies seem to have settled on 5 or 6 round robins being a good number. So if you have 256 layers and 5 round robins, that is 1280 samples per articulation (head, rimshot, cross stick) per drum, which makes an amazingly large amount of data.

What the clever companies are doing is making the sample selection more random and doing away with the round robins – if you hit two notes exactly the same, the first one will be the ‘correct’ sample, whereas the next will be borrowed from from a slightly louder or quieter layer, but the volume adjusted to compensate.

Thats probably enough for this time, next time we’ll look at this a bit more and also talk of machinegunning.