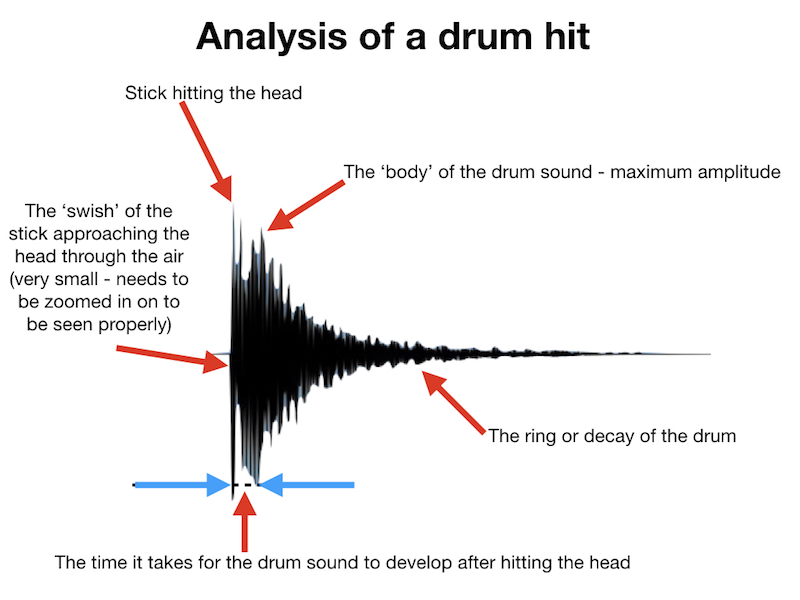 So we left off last time talking about machine-gunning. This is the effect you get when you play a pad multiple time (like in a fill) on an electronic kit, at about the same velocity, and the sound (lets assume its a snare drum sounds) sounds really jittery, jumpy and un-realistic.. and almost like a machine gun – ta-ka-ta-ka-ta-ka-ta-ka etc. This is because the same sound is being played every time the pad is hit and we can hear this and it doesn’t sound natural to us.

As I mentioned last time, acoustic drums are NEVER the same sound twice – it is a physical impossibility – even if it sounds the same, you would be able to find differences on an oscilloscope if you analysed each hit.

So we are used, when we play acoustic drums, to not getting a machine-gunning type sound. Indeed, if you think about it, when you hit an acoustic drum’s head, the head starts to vibrate and give us the sound we expect, but if the head is still moving when the stick next hits it, the head movement is going to make the start of the drum sound different from the last one as the stick and head will be moving towards/away/together in a totally different way, so changing the impact of the sound. This is why acoustic drums don’t machine-gun. 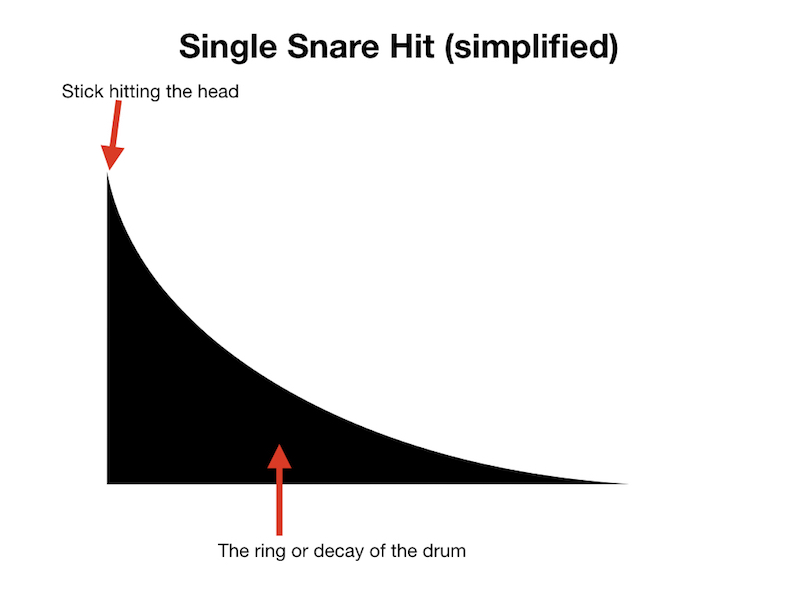 But going back to the electronics, there are only a few different samples that the module can play (or generate if it is a modelled module) so each hit tends to have the same(ish) sound at the start of it, which leads to machine-gunning.

VSTi’s obviously have more samples (round robins or layers) so tend to sound more realistic and less noticeable, but you still get it, particularly on some sounds with sampled compression (where the sound has been sampled with the compression already on it, not added on after the sound has been played which is what would happen in a studio). Thankfully though, computers and VSTi’s are so powerful now that you can add on whatever effects to the sound after you have created your drum sound, so it all sounds much better.

The first company who almost totally dealt with machine-gunning was ddrum back with the ddrum 4 and 3. I know I keep bringing them up, but I’m a big fan, and so many of their ideas have been ‘borrowed’ by other edrum manufacturers – positional sensing, pressure sensing, anti machine gunning, multi layer samples – that I feel they deserve a bit of appreciation, albeit 30+ years after the event! 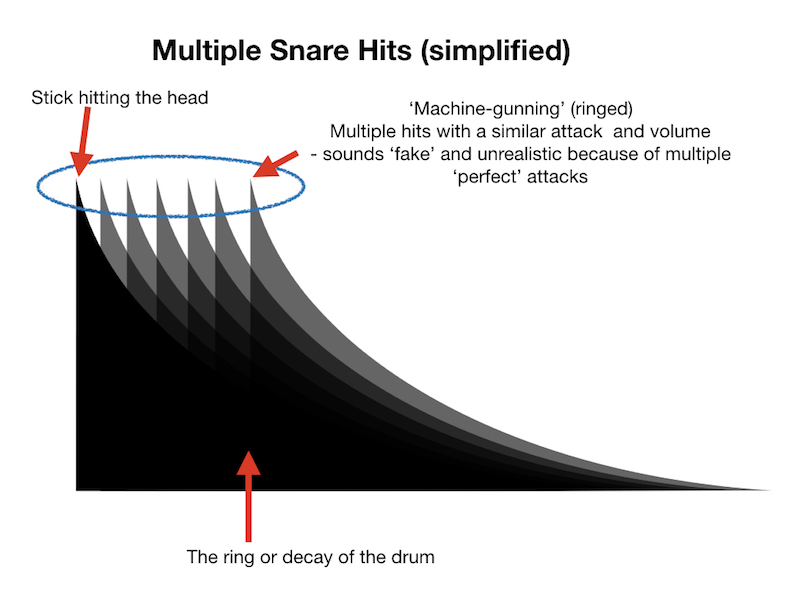 What ddrum did (as I understand it) was create a little ‘gate’ on each channel of their modules, and another part which analysed the speed of the playing coming into each channel.

If the playing was slow – just a back beat for instance – then the gate would open instantly and the full sample would play for each hit. But if the note frequency got above a certain amount for a fixed amount of time, the gate would open slightly slower and just trim off the start of the note, in effect removing the attack of the note so it did not machine-gun. The faster the playing, the slower the gate opened, so at really fast speeds, all the attack was removed, so you heard the body of the note, without the troublesome ‘click’ or stick attack. It worked great, and this was all done in hardware remember – no computers here at all – and to my ears has still not been equalled in hardware. In VSTi’s of course, it is much easier to tweak settings like note attack speed, but this was well before all that. 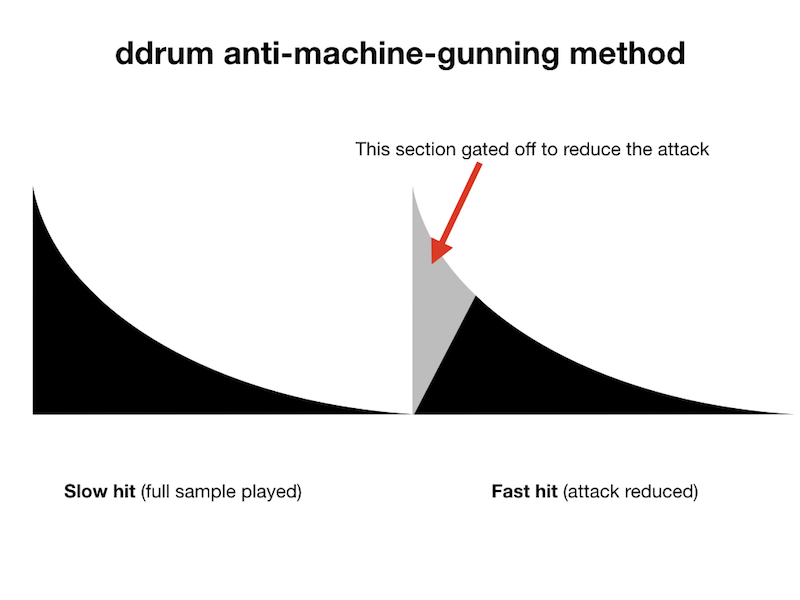 Some manufacturers have come up with their own similar systems (one I know changes the panning, filter and a few other parameters for each and every hit) but they still didn’t sound so realistic as a VSTi.

But thankfully though, we are getting into the era of drum modules with plenty of storage space, high audio quality, and enough clever programming to make it sound realistic.

I think that within a year or so, it will be hard to tell live whether we are listening to a really well mic’ed up acoustic kit, or an electronic kit played with an acoustic kit with mesh heads on.

If you dont believe me, check out the following which was recorded in 2018 and features a Pearl Mimic Pro module triggered by an acoustic kit with real heads, internal Padtech triggers and real cymbals (the players choice for the venue). The drums are fully padded so there no noise coming off them, the cymbals are picked up with conventional microphones, but the drum sound is 100% NOT acoustic. Impressive stuff.

I should point out that this video wasn’t recorded for Pearl – it was recorded by Endre eNerd for his own use so wasn’t meant as a sales video – but was commandeered by Pearl (hence the logo at the start) because it was so impressive. 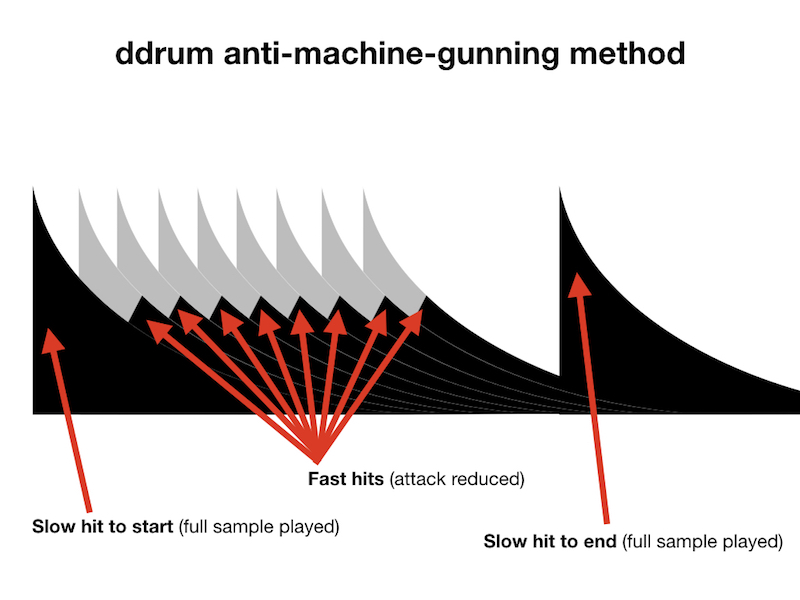 So, three articles about modules v VSTi and where have we got to? Well, so far, it looks like most existing modules don’t cut the realism barrier (limited storage, machine-gunning etc) VSTi’s do (loads of storage, clever programming, incredible power in comparison with modules), but many drummers don’t want to take a computer on stage or have to rely on it, but the new breed of modules should be going in the right direction.