Due to lockdown/C19 I have found myself doing more video work and my 2014 Mac Mini wasn’t really up to the job of video editing, especially as I want to work in 4k, so I decided to look into replacing it last November.

24 hours later, Apple announced the new M1 Macs. Bingo! It looked great for video work and that was my biggest concern. I’d keep my current Mac Mini for audio work (as it is great) and everything would be good.

The new Mac turned up a few weeks later (the lead time suddenly went from a few days to a few weeks) and the box was not opened for quite a few more weeks while I finished some stuff and decorated my studio.

In the last week, I got around to setting it up.

OK, so its great for video work. Thats a given. And everything runs on it, even though I was told by a few companies that their software wouldn’t.

But what makes this really, really special, is how it performs with drum VSTi’s/ plugins.

On my old Mac, I would run stand alone VSTi’s like Superior Drummer 3, EZdrummer 2 and Addictive Drums 2 at an audio buffer size of 128 samples/ 2.9ms output latency. This was so that the computer would have a chance to catch up and the audio would be clean – if I lowered it anymore then the audio would break up and go crunchy. If I was running lots of other audio, I might have to lower it to 256 samples / 5.8 ms latency.

I know those are great figures for most people, as I’ve spoken to many PC owners who get much higher figures than that, and much bigger latencies, but (without wishing to sound like an advert) thats why I use Macs.

But with this new M1 Mac, I can run Addictive Drums in stand alone mode at the very smallest buffer size of 16 samples. That is 0.4ms output latency.

Just let that sink in.

Audio travels at roughly 1 foot (30cm) per thousandth of a second (1 millisecond).

So thats like saying if my computer was the snare drum, my ear would be 12cm away from the drum and it would hear it 0.4 ms after I’d hit it.

Thats faster than if I was sitting behind an acoustic drum kit where my ear would be 2.5 feet (76cm) away from my snare. 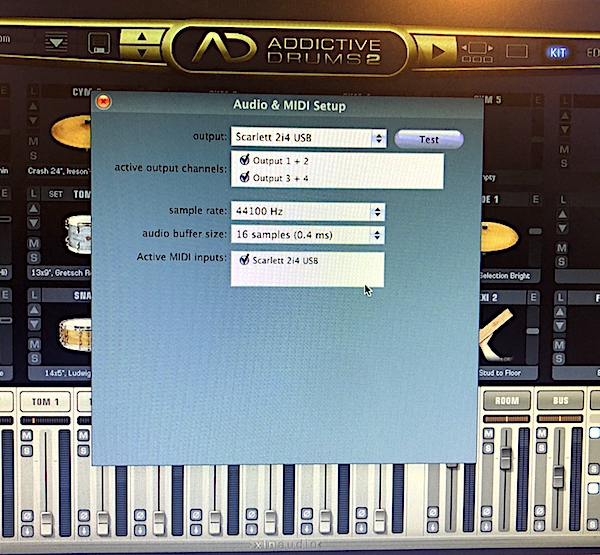 Of course, it doesn’t really work like that in the real world – my electronic kit has to output the midi which takes a couple of milliseconds, the midi data has to be processed by the computer and then the program can send out the audio data to the drum module (which is being used as the audio interface as well). That all takes a little bit of time.

Yes, you need a monitor, and a keyboard, and probably an external hard drive or two to store the massive sound libraries of SD3 or whatever software you use. But the base model has plenty of space to run Addictive Drums or EZdrummer on, so an external drive is not necessary.

Now, theres a reason I mentioned Addictive Drums. This is because at the moment, it is the only drum VSTi that allows (in stand alone mode – not running inside a program like Logic, Ableton Cubase etc) you to lower the buffer size to 16 samples.

Everything else has a lowest buffer setting of 64 samples (SD3, EZ2 etc), but I’m sure that will change before long when the coding gets updated to suit the new Macs.

Apparently (thanks to Anders G!) Addictive Drums in standalone mode is really tightly integrated with the Apple hardware which is why they can get the buffer size so low without problems.

So just how good is that?

A while back I was doing some programming for a band that are rather famous (even all my elderly relatives had heard of them, and some owned records by them – gives you an idea of their age!). For the drums they were using an electronic kit, disguised as an acoustic kit, and we ended up using Superior Drummer 3 running on some MacBooks through a MADI audio system (full redundancy RME Madiface and Ferrofish A32 if you really want to know) for the sounds. We were able to play the kit at 16 samples over 16 individual outputs, and it felt and sounded great.

However, that system cost £2500, plus £1500 for the MacBook at the time. Total £4000ish (it actually cost twice that as we had two of everything, but that’s rock and roll budgets for you)

Ok, so its not comparing apples with apples – one was for a stadium tour, the other is more suitable for home use – but, you get the idea.

Thats a 62% price drop over 2 years for similar performance.