Recently I had to program a John Bonham ‘style’ drum track. I wanted to make it so that hearing it instantly conjured up thoughts of John Bonham but without being any one of his particular grooves ie not trying to rip him off totally.

I decided I wanted a groove similar to Fool In The Rain but the drum sound of When The Levee Breaks (nothing like mixing things up!), so it would be a classic Bonham half time shuffle, but with even echo.

Overall, this was pretty simple to do, but one thing just kept sounding wrong to me. The delays which give the bass drum the distinctive sound on When The Levee Breaks just didn’t sound right. The track used a Binson Echorec which unlike other similar echo machines of the time, used a magnetic piece of wire wrapped around a rotating drum, rather than a tape loop (see last months article). This gave it great stability (it even came with a lifetime guarantee), very even delays, and it sounded great!

As I was doing it in a DAW (Ableton in this particular case), I had (lazily) just put a virtual tape delay on sixteenth notes. Technically it was ‘right’ but the whole thing just sounded too nice and correct. It was just too perfect.

So I went back to listen to the original tracks. Bonham had definitely recorded without a click and the Binson was definitely analogue (not digital perfection), so that the delay tempo didn’t quite perfectly match his playing tempo. It was the discrepancy between the drums tempo and the echo tempo which gave it the distinctive sound and fell. As the delay faded away, you can hear it get more and more out of time 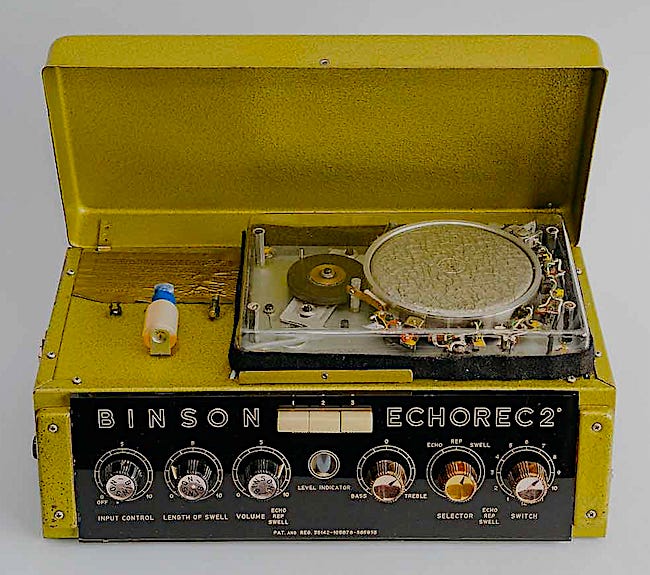 So I went back and started playing with the speed of the delay, and simply turning off the delay quantise, and making it go out of time fractionally by a few tens of milliseconds, made it sound much more authentic.

This got me thinking about all the times when we have all this gear and technology at our disposal and we do things because they are ‘correct’, but not necessarily ‘right’.

In the (analogue) drums world, we love one piece Radio King snares because they have a character and a nice ‘musical’ ring to them. But the reason they sound that way is that the wood shell is still fighting to get back to its original shape ie a flat board, so Radio King shells are all out of round… but thats one of the reasons why we love them. (I’m not suggesting you do it, but if you were to cut a Radio King shell from top to bottom, and leave it a few days, the gap would open up to a rather impressive amount)

We’ve got used to mixing with our eyes, rather than our ears (“does the snare line up with the kick?”). We automatically put everything ‘on the grid’. But thats not necessarily a good or music thing.

So how about when we next mix our drums we use our ears rather than look at the monitor? How about we set delays by ear rather than just click on the ’16th note’ button.

As a final example, I needed to make an electronic kit sound as ‘acoustic’ as possible (shouldn’t it be like that all the time?). The final kit was made up from a 10” maple, jazz (high) tuned tom, a 12” birch ‘rock’ tuned tom, and a 16” hybrid shell floor tom tuned slack, with a tuned down open bass drum and a metal snare. Individually the drums didn’t match at all – it sounds really ‘mix and match’ – but when played as a kit, it sounded great. You couldn’t get more imperfect as a kit, but maybe, just like negatives cancel each other out, audio imperfections do too!