The Stuff Of Magic… eDrum playing to score printing 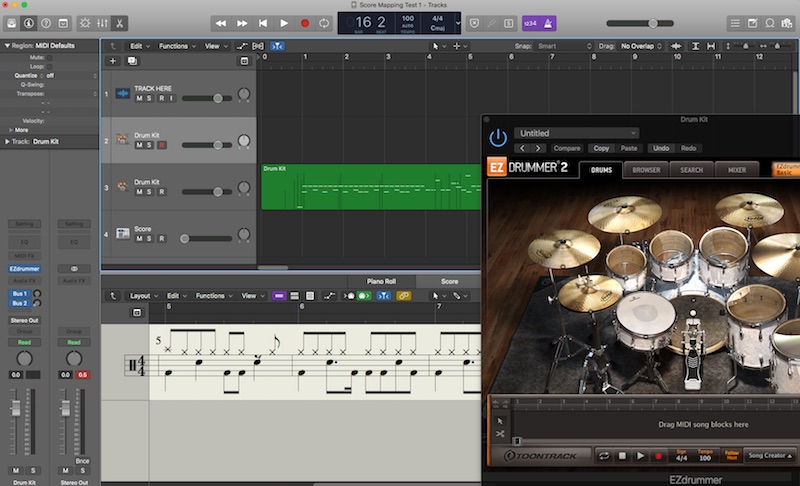 An example of my template in action – triggering ezDrummer 2, but also converting the midi from a Yamaha Multi 12 into a correctly written score in real time.

Since I started using edrums I have also taught drums, and I’ve also had some very, very good teachers myself (luckily). And while I’ve been teaching, or being taught, there was always one thing that I always thought would be brilliant as a teaching device if it could ever be made…

What I wanted was a device that could listen to you playing on a drum kit, and immediately after you had finished, could show you on a screen what you had just played in tidy, perfectly written, corrected drum music. Then I could press one button and print it out on nice clean A4 so it looked like ‘proper’ music.

Imagine a lesson where the teacher demonstrated something, hit a button and handed the student what was just played on nicely written manuscript paper – no hand scrawled notes.

Imagine the student playing something, and instantaneously the teacher being able to show them, on perfect, printed drum notation exactly where they were going wrong.

That is what I wanted.

Well, for the last 2 or so years, I’ve had this ability and it has been an absolute brilliant. Now I know there are probably other programs which will do this, but I’ve yet to meet anyone who uses it, so this is how I use it and how you can use it too.

There’s been a couple of Logic templates to do this kicking around for a while, and instructions on how to set it up, but none of these worked on my particular computer (Mac) despite a lot of tweaking. So after following a lot of threads on different sites, and a LOT of head scratching, I created a template of my own on Logic Pro (10.4.1) on my Mac.

What happens now is that when I connect an electronic kit (or Multipad or any other ‘hitty’ device) it shows me on the screen in real time exactly what I am playing as ‘normal’ drum notation. Nice, neat, properly written with all the notes looking right, and all the instruments on the correct line or space.

I also have Toontrack’s EZdrummer 2 loaded up on a parallel channel so I can hear my playing at the same time as I play it, with whatever drumkit and cymbal sounds I desire.

The electronic kit outputs its regular midi data, but the template in Logic transposes the notes to the correct position on the stave and changes the note heads to correct shape (‘x’s for cymbals etc and you can choose exactly how it is shown).

Then I just tidy it up if required (sometimes I have to nudge a couple of notes back in place and make sure that pieces with mixed meters are shown correctly) and I can print if off for teaching, or file it for later. It’s brilliant and save hours of transcribing things that I have played, or that students have played to me.

I also have a separate channel just for audio tracks I want to play along to. I drag the track in, make sure its in time and the bars of the Logic project correspond to the bars of the piece, hit record, play along and just watch the score appear before my very eyes. 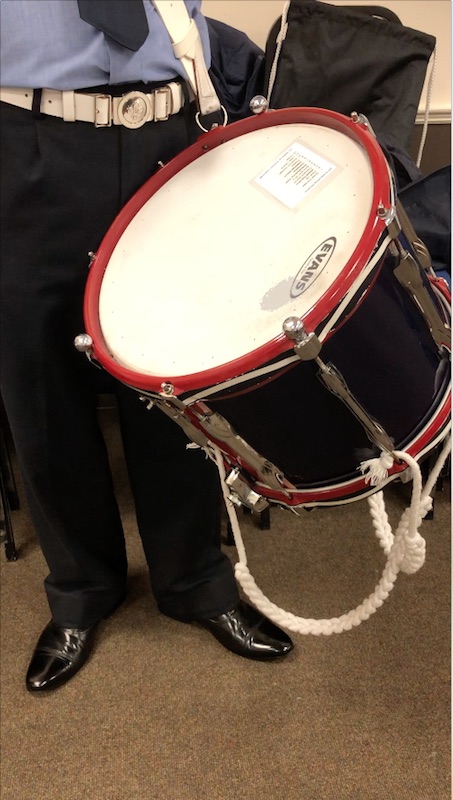 A still from the original iPhone footage

So recently I was approached by a local Scout Band (yes, I know, very rock’n’roll…!) who had a problem…

Their lead snare drummer had been with them for many years and knew the snare drum parts for all the pieces the band played, but there was no written music – it was all inside his head. The drummer couldn’t write music, could only read very basic music, and the band wanted all the snare drummers to play the parts as the main drummer did. They just lacked the written parts for the other drummers to learn.

So what they wanted was to get the snare drum parts for maybe 20 pieces ‘out’ of the head of the lead drummer, onto written music, so the other drummers could learn them.

Initially it looked like a lot of work. I guessed I had 3 options;

But how to do it? After a bit of thinking, this is what I did;

2. I loaded the audio from the video into Ableton Live. I then EQ’ed the band in the background out as best I could so the snare was as loud and clear as possible.

3. I dragged the performance into time. Ableton is brilliant for nudging performances onto the grid or completely changing the timing of a performance (shuffle version of a Metallica tune anyone?) as are many, if now all DAW’s (Cubase, ProTools etc). By spending a couple of minutes doing this, the performance perfectly lined up with the built in click and made the next stage much easier. 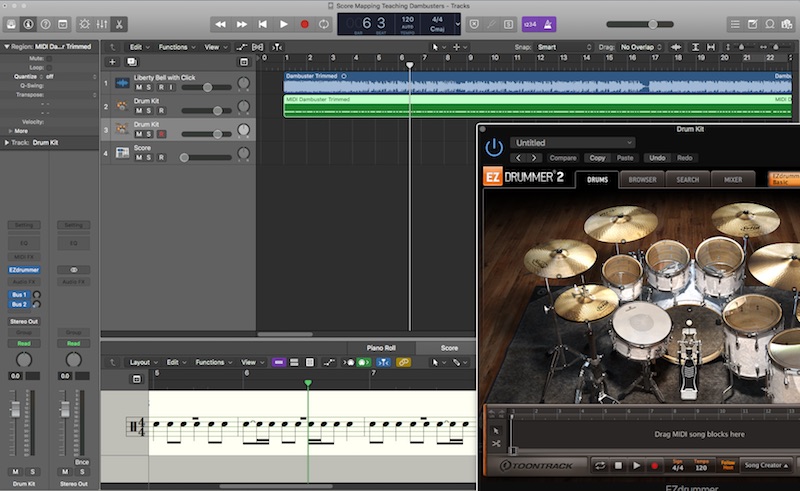 The Logic template creating the written part, from the midi file generated by Ableton, from the audio of the video

4. I right clicked on the audio file in Ableton and then clicked on ‘Convert Drums To New Midi Track’. This is why I used Ableton for the initial stage – what this does (and again, it is SO useful) is create a midi drum part from an audio recording of a groove (or just a snare drum in this case). Ableton analyses the audio and puts what it guesses the snare/kick/hats etc parts onto the correct midi notes. A few years ago this would have been impossible to imagine, but now I use this everyday and don’t even think about it. If you are a drummer, its worth buying Ableton for this feature alone.

5. I exported the newly created midi file. So again I just right clicked and exported the midi file of the snare drum performance onto my desktop.

6. I imported the midi file into Logic Pro running the drum scoring template I had created. As mentioned above, I usually use an electronic kit to generate the midi data, but in this case Ableton generated it from the audio of the snare drum performance.

7. I let the Logic template create a written snare drum part from the midi file. This needed a little correcting, which I did by comparing it the original video file of the drummer playing. I ignored the embellishments (ruffs, drags, flams, rolls) as I knew I could add those onto the written part later – it was the ‘meat and potatoes’ of the track which I was after here.

8. I exported the PDF of the drum part out of Logic.

9. I loaded the PDF into Keynote, so it appeared on my computer screen like a piece of written music and added the title, tempo markings, dynamics, any instructions and any written embellishments that Ableton hadn’t been able to detect (flams, buzzes, rolls etc). The part written by the Logic template automatically added the correct bar numbers so it was easy just to check it against the video again. 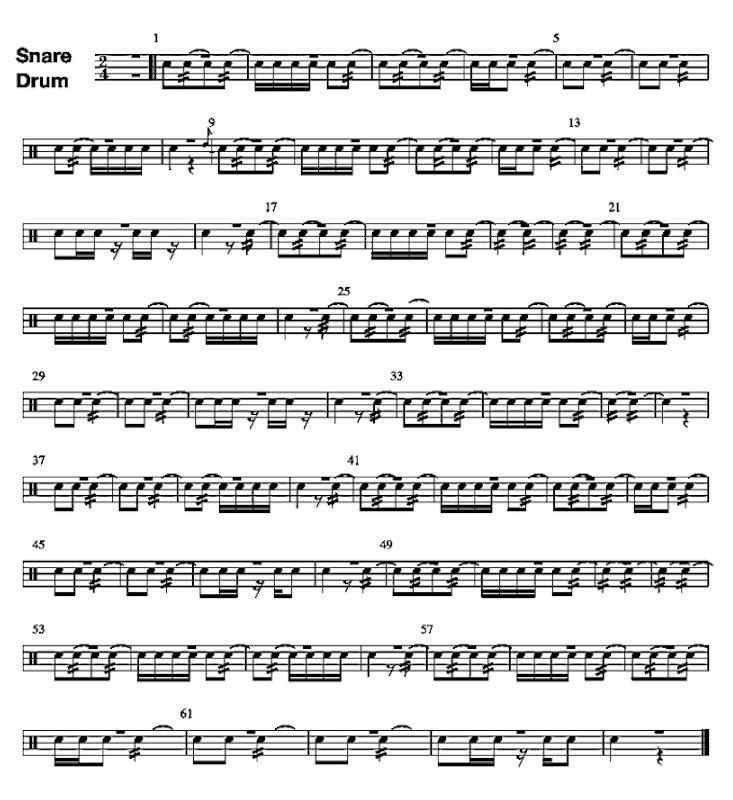 An example of one of the finished pieces, all nicely printed out.

10. I printed the new sheet of music out.

And that was it.

If you’d told me I’d be able to transcribe marching snare drum parts without using drum sticks or pens, 90% automatically (adding the embellishments was the only bit I needed to do ‘by hand’) I’d have never believed you three years ago.

I reckon the time used to transcribe the 20 tunes was about 3 hours (probably just under 10 minutes per track) in total and as most of it was done automatically, I could do other things, like drink coffee and each lunch all at the same time. I dread to think how long it would have taken to transcribe those 20 pieces by hand.

If you run Logic Pro, then its worth spending some time trying to get this to work. There’s plenty of info out there if you Google it, and before you ask, no, I cant share mine I’m afraid – I’ve tried and it doesn’t seem to want to play ball.

But, if you can get it to work, it is priceless.