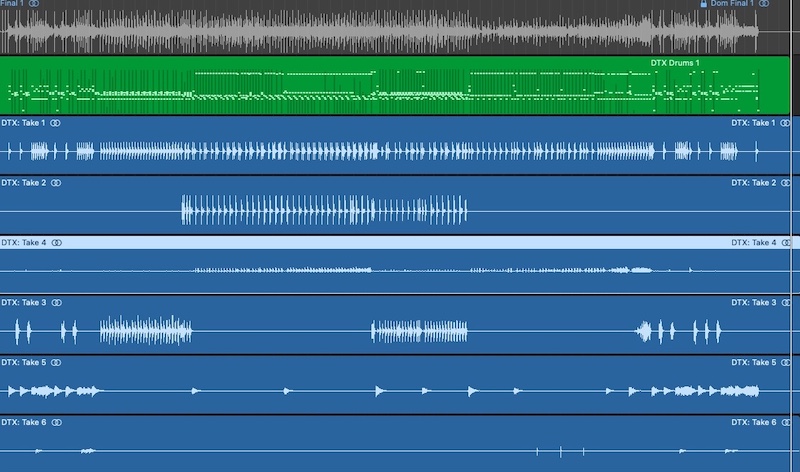 I was talking to a friend the other day who was lamenting the fact that he would need to (possibly) get a new electronic kit. When I asked why, he said he needed one which could output all the different channels separately so he could record it at home into his computer like an acoustic drum kit, with the bass drum on one channel, the snare drum on another channel, the toms on another channel etc.

Every electronic kit with just left and right outputs can output every single channel separately, as long as it has a MIDI/USB port, and no, I’m not talking about recording just MIDI – I’m talking about ending up with the kick audio on one channel, the snare audio on another etc, JUST as you would get from an acoustic kit (or from a very expensive electronic kit).

Let me explain how.

There is a current trend for electronic kits to have multitrack outputs over USB so you can plug the USB cable into your computer and the kit will appear as (say) 10 different channels – kick on one channel, snare on to another channel etc. 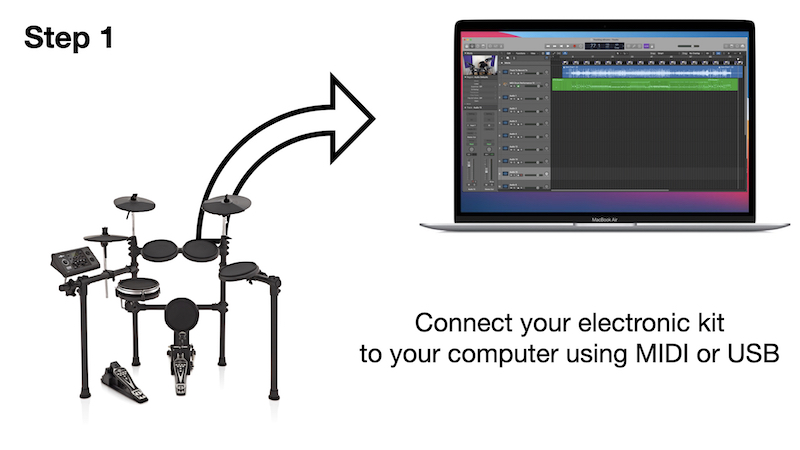 Yes, this is very convenient and very easy but it doesn’t mean that you can’t do that on any other electronic kit ever made, just by spending a little bit more time doing it.

I’m going to assume that you are recording onto a computer. 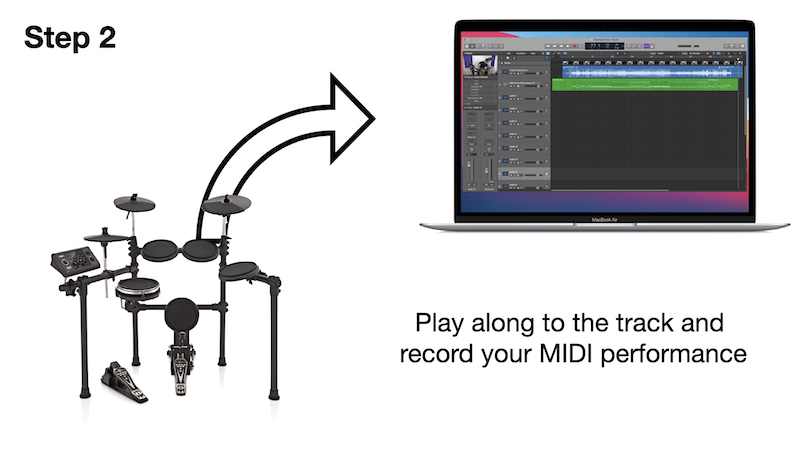 The most important thing is to get the performance right. If you connect your drum module to your computer via USB, or a USB to MIDI interface, and record your MIDI performance.

Being MIDI it can be tweaked (for tweaked means corrected – dodgy notes can be moved, mistakes can be deleted, a great chorus performance can be copied to all the other choruses etc) very easily.

(However, don’t be tempted to just correct everything and make your performance perfect – it will sound boring and stale. You need to leave a bit of humanity in there) 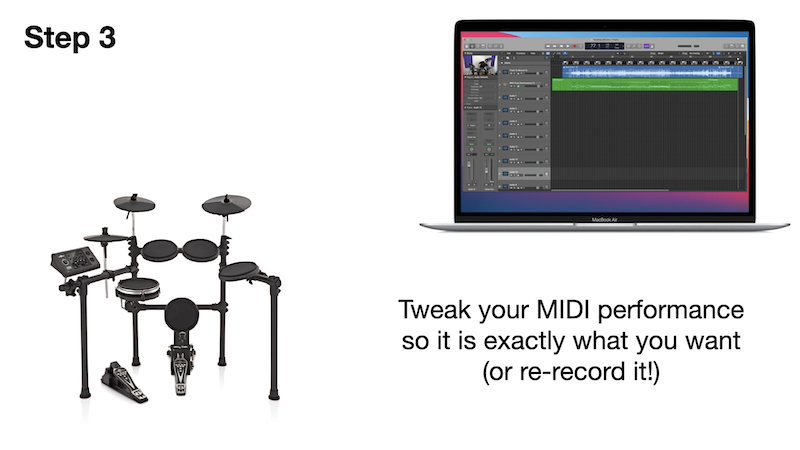 You can listen back to your performance just by playing the MIDI data back down the MIDI/USB cable to the module and listen to what comes out of the module (on headphones or speakers). That will be an exact reproduction of what you played (minus the mistakes!)

Like everything when it comes to recording, the more you do this the quicker and better you become at it. 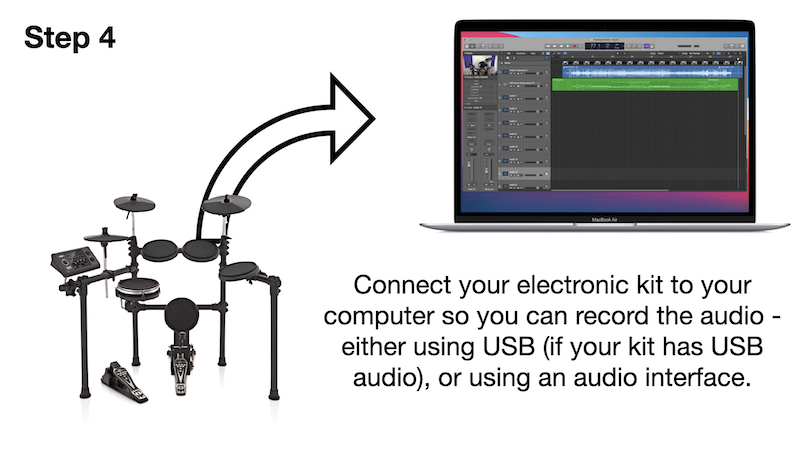 When you have your drum performance recorded on the computer as MIDI data you need to make sure that your sounds are correct, and it sounds pretty much how you want the final drum tracks to sound – dead kick, ring the snare, bright cymbals etc. However, being MIDI data and the fact that you’ve recorded it into the computer, you can always go back and replace the sounds later, if you want. 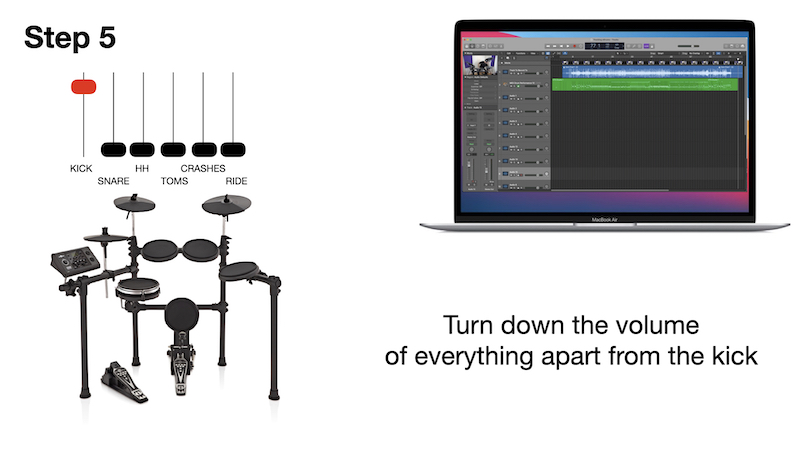 Then you go to the module and you turn down the volume of everything apart from the bass drum. 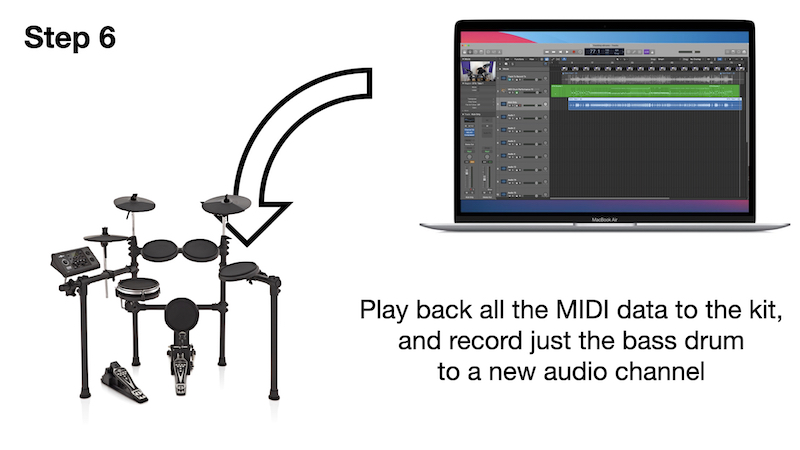 Then go to the computer and open a new audio track and set it to record from the drum module (either as USB audio, or from the outputs of the module through your audio interface).

Then hit play and your MIDI data will go down the USB cable to the module, and trigger your performance from the module. However, as everything is muted apart from the kick drum, just the kick drum will be will be recorded onto your audio track. 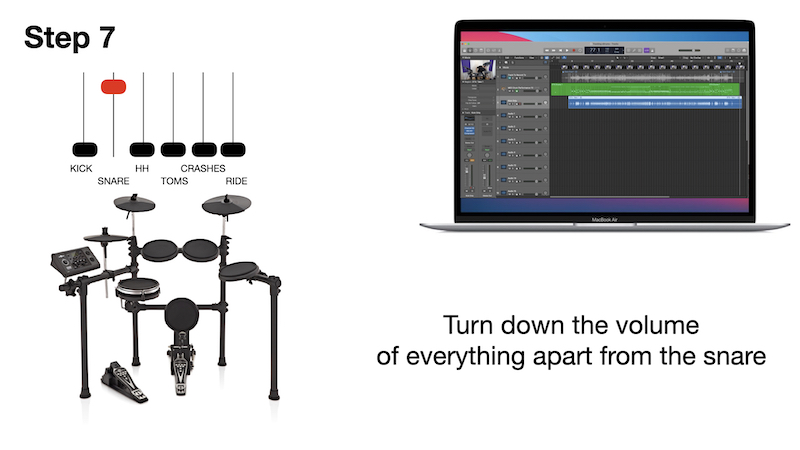 Set a new track to record on the computer and hit play. Now everything is muted apart from the snare drum so this next audio track will record just the snare drum performance. 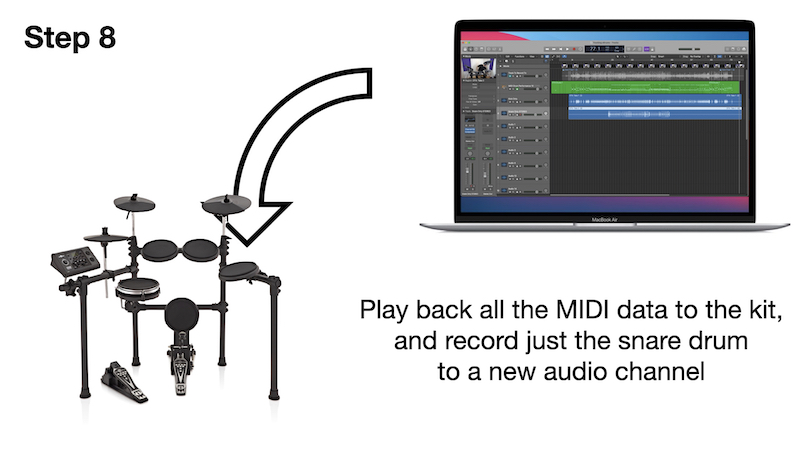 At the end, you should have a load of audio tracks on your computer with the bass drum separately, the snare drum separately, that I had separately, and then whatever combination of drums and symbols you decided to record.And because they were all triggered by the same MIDI information/performance, they will all line up and be in time with each other. However, depending on the speed of your computer or audio interface, you might need to nudge the performance forwards or backwards in time so it lines up perfectly with the recorded track you played to. Just make sure you nudge all the tracks at the same time! 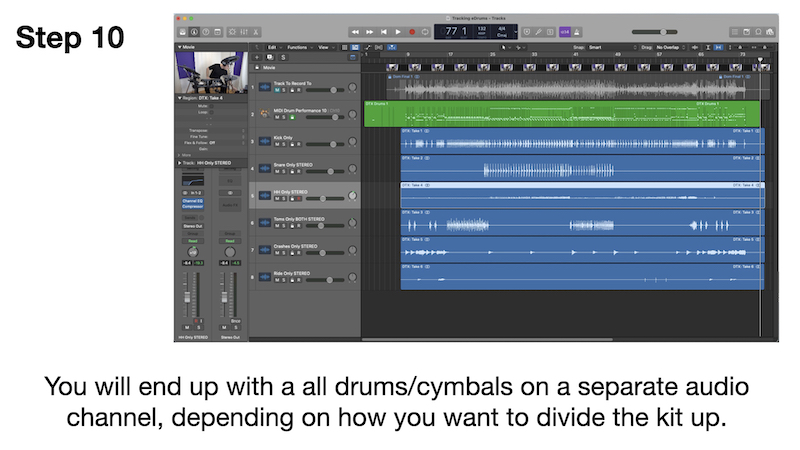 It’s very simple but it does mean that you can get all the tracks separately and the best part of it is that you can go back and you can change the sound of the snare drum or the bass drum for instance and we record it and it will be exactly the same as the performance you recorded before just with the new sound.

I hope that makes sense – it’s so obvious but I think a lot of people have overlooked it because they didn’t think it would be so simple but the truth is, yes you can have separate drum channels from any drum module as long as you are recording onto a computer and the module has a MIDI/USB port.

(If you want to be a bit more advance, you can even automate this. On Logic (and most other DAW programs) you can set audio channels to record different takes in a continuous loop and then separate them out afterwards to separate channels. All you have to do is change the mixer settings at the end of each take (turn the kick down and turn the snare up etc), and after the track you are recording to has played through a few times, you’ll have all the separate drums on different channels. You can even automate the mixer changes so you don’t even have to touch anything while the computer and module are putting all the tracks down)