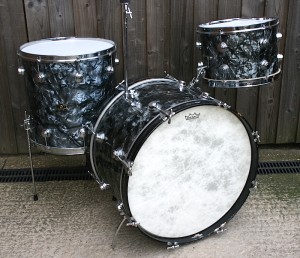 Although the name George Way will not mean much to a lot of drummers, those who know of him will know of his great influence on the modern drum set. Before setting up his own drum company, George Way worked with many of the main manufactures of the 30’s, 40’s and 50’s. Companies such as Amrawco (American Raw Hide Company), George B. Stone, Leedy, Slingerland, Rogers, C.G. Conn and ‘Leedy & Ludwig’ all benefitted from his attention before he started his own drum company.

Born in 1881, the teenage George Way had lessons with the legendary George B. Stone. To pay for his lessons, George worked as office boy in the Stone Drum Factory. By his late teens he was working professionally as a vaudeville, circus and traveling minstrel show drummer, with the likes of the Ringling Brothers Circus, Buffalo Bill’s Wild West Show, Gentleman Jim Corbett, and silent film star Al Jolson. 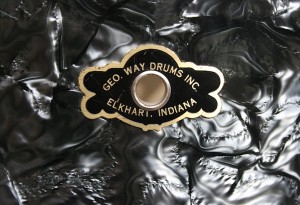 Inspired by his work at the Stone Drum factory, GW was constantly coming up with his own designs. In 1912 George opened his own business, the ‘Advanced Drum Company’, in Canada. The company ran for nine years, but didn’t really take off as George had envisaged. He continued his playing career as a theatre percussionist in the meantime.

In 1921 Way was offered a job by U.G. Leedy as a sales manager for the Leedy Drum Company and he moved to Indiana to take the position. As a professional player and with an understanding of drum manufacturing the job suited George down to the ground.

While at Leedy, George Way designed the Floating-Head hoops, pearl drum covering, and the parallel snare strainer – things we all take for granted today. 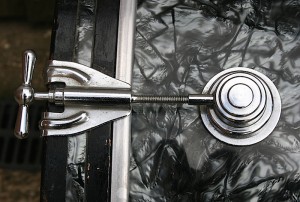 Two years later George joined Slingerland as a sales manager, but was not comfortable within the company. Despite this he invented the HH Ball Bearing pedal for Slingerland, the first pedal to feature an enclosed spring. This work placement lasted less than a year, and George soon opened the Hollywood Drum Shop with Leedy endorser Harold McDonald. Although this venture was again not as successful as hoped and Way sold his interest.

In 1948 Leedy offered GW his old job back in Elkhart Indiana. Working on both Leedy, and Leedy&Ludwig drums when Conn merged the two marques in 1951. Again this was short lived when Conn decided to get out of the drum business in 1955. 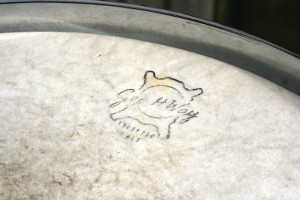 Seizing the moment George Way decided, with the help of some financial backing, to start the George Way Drum Company in the former Leedy&Ludwig building in Elkhart. This was where he designed the unique turret lug later to be used on Camco, and now Drum Workshop, drums.

The George Way company produced snare drums and sets for the next seven years before John Rochon, the owner of Camco bought a sizeable number of shares in the company. Soon after Rochon bought out the other shareholders in the company and gained majority control. In August 1961 Rochon called a board meeting and put forward many ideas that George did not agree with. George told John Rochon in a letter, that if he was seen as a hinderance to the company, he would drop out. Rochon took no time to decide this was a good idea, and accepted George’s and his wife Elsie’s resignations. George wrote “ I don’t know yet whether we quit or got fired”.

George went on to work for Rogers in 1961 for around nine months before resettling in Elkhart and starting the G.H.W company making drums. He was unable to use his name because, as he said at the time, “ The man who took over my old company refuses to let me use my own name, due to an employment contract held with the stock holders when we first started”. 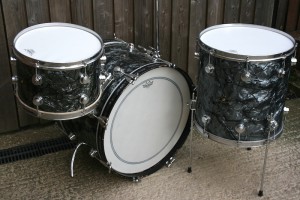 In 1964 George had a heart attack. Then soon after he fell down a flight of stairs and broke his leg, which never healed properly. On February 21st 1969 George Way passed away.

George Way has had a massive and far reaching influence on the manufacture, design and styling of the modern drum set, despite what one may think by taking a cursory glance at his career and the many short lived jobs he had. His own George Way kits are truly something really special.

The Aristocrat set which we recently shipped off to Denmark with the famous turret lugs was ordered new in 1960 by a Mr Bush. The Bush’s were a family who lived in Elkhart Indiana “around the block” from the factory. The 13” tom was still sporting it’s original calf head. We were sad to see it go.