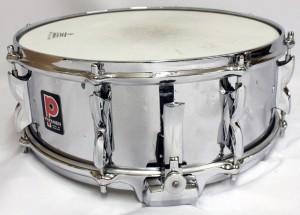 The 2000 snare drum was introduced by Premier around 1966 with it gaining its debut in the 1968 catalogue. Although Premier had other metal shell snare drums on the market this model became iconic for both its design and its sound.

The 2000 features a single spun metal shell, with no bead, plated in Premier’s world famous chrome. The early 2000 snare shells were brass, with the older block style P badge and ‘Beer barrel’ die cast hoops. These brass shell drums are very rare, I’ve only seen one. The shell construction was changed to aluminium quite quickly, and remained staple throughout the 70’s (one can only assume this was a cheaper option for the mass production of a popular snare drum). Die cast hoops remained standard, but with a more streamline design. In the Late 70’s / early 80’s the shells became steel and the tension rods became square rather than slotted. 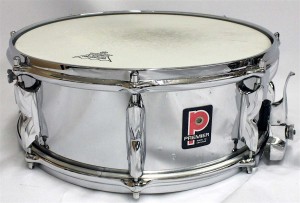 The 2000 was both stylish and highly functional for its time, when many other brands were copying Ludwig. The unique ‘flo-beam’ snare mechanism with a central bar and snare brackets that are detached from the shell allow full resonance of the drum. Twin 12 strand snare wires remain at full tension even when ‘thrown off’ preventing bounce back on the resonant head. Two height adjustment screws at each butt end hold the snare wires in place and keep the snares wires level; some argue it’s perilous to mess with these, and that they should remain at their factory setting. If you buy a 2000 snare in poor condition or with the wires missing, chances are you will need to adjust these screws, but do so with care as the heads are prone to snapping off. The throw lever was, and still is, like nothing else on the market. Beautiful and sleek from a design perspective and smooth in its action. Later the snare wires became one piece 24 strand rather than two 12 strand sets. Additionally, tone control dampers were omitted from later drums. 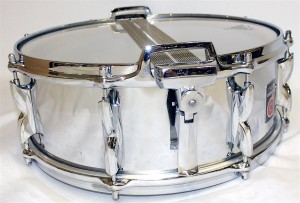 The 2000 snare was available as a 4”, 5.5” and 6.5” shell, with the 5.5” being the most common. Premier also produced a 14 x 12” concert model. The aluminium shells are the most common and preferred by players, although with these drums the chrome is prone to flaking off. Most don’t care too much as this doesn’t affect the sound of this drum.

This snare drum was famously endorsed by the late Keith Moon. I’m assuming that the 2000 that Keith Moon played was a 60’s brass shell, but I could be wrong. Other earlier players include Clem Burke (Blondie), John Maher (Buzzcocks), Rick Buckler (The Jam), Billy Doherty (The Undertones), although the snare remains hugely popular today.