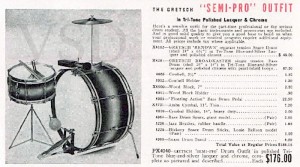 After last months look at the Ludwig Clubdate and how less metal work can make for more tone, we’re going to look at a more seldom seen single lug set up – the Gretsch Playboy Outfit.

As with all ‘student’ models/ cheaper set ups of the time, Gretsch’s mid 60’s Playboy outfit featured the same 6-ply Jasper shells as its more expensive models. The Playboy wasn’t Gretsch’s first single lug set up, but it was the first to feature a mounted and floor tom.

The ‘Semi-Pro’ Oufit, (a name that wouldn’t sell many units in todays world) featured a single single tension ‘Broadkaster’ kick drum and ‘Renown’ 14×6.5″ snare, cowbell, woodblocks and cymbal, as seen here in the 1954 catalogue scan (above right). It’s 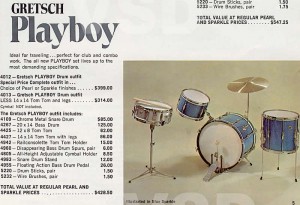 interesting how all the old fashion branding and drum series names (such as both Broadkaster and Renown) make their way back into modern day drumming!

But the outfit that interests us most is the Playboy Outfit, first seen in the 1964 catalogue. The set was 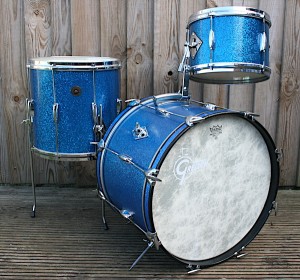 We were luck enough to have found a complete Playboy Outfit a couple of years back and can honestly say the differences between this outfit and the more coveted Progressive Jazz Outfit are negligible. Maybe it’s the control of those big heavy cast hoops or just the weight of them, but the the Playboy sounded almost identical to the Prog Jazz with no real difference in tone or depth. Interestingly the Playboy may be a more sought after set with collectors, as not many complete kits with the 14×14 seemed to survive, but from a players point of view the still don’t command as high a price. 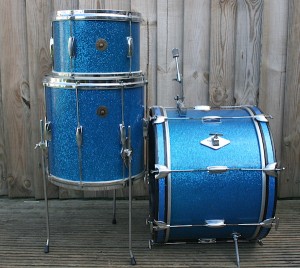 Well worth trying to find one if you want to stand out from the crowd!