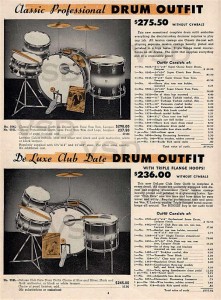 With Ludwig sometimes less is more.

I know my last article featured the Ludwig Super Classic kit, but I find myself leaning the Ludwig way again this month. However, this time I thought we would look at what many saw as a more ‘budget’ outfit this time… the Clubdate.

Although the branding first showed up in catalogues around 1941, the Clubdate we all know and (many of us) love really first came to be seen in a recognisable form in the late 1940’s under the WLF marque.

Many now see the Clubdate set as a ‘student’ model drum set with less metal work on the shell helping to keep the production costs down. A single ‘twin tension’ cast lug reduced production costs for these sets, and it must have been a good idea as nearly all the main drum manufacturers produced their own variants – Gretsch ‘Playboy’, Rogers ‘Tower’ and Slingerlands ‘Stage Band’ (but we’ll get on to those another day).

The 1949 ‘De luxe Clubdate Outfit’ featured in the WFL catalogue topped out with the cashier at $252 with all the bells and whistles (well, actually a Buddy Rich Book, Speed Master Pedal and snare stand to be totally accurate), which is the the equivalent of $2599 in todays money(!). To give you an idea, the same size and finish drums with single tension lugs, in other words the Super Classic we’ve all become familiar with, hit the bank balance for around $315 (around $3249 today) – a substantial saving for essentially the same drums shells and finish. 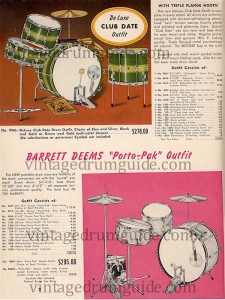 By the late 50’s, with the shift in musical style from the swing era to bebop, the drum sizes began to get smaller and the Clubdate changed to a 22×14”, 13×9” and 15×12” floor tom, still being offered in the same shell configurations and finishes at a reduced price for less metal work.

We were luck enough to have a WFL-Transitional Badge set in this configuration a while back, with all the original extras, hardware and heads. What a piece of history, and what a set of drums! They weren’t for sale long, needless to say.

The 15” floor tom is a seldom seen drum, as it was a costly addition for many drummer on a budget, but if you hear one, you will instantly want one. The control and playability of a 14” floor tom with the range and depth of a 16”.

By 1963 the fashions had shifted and the familiar and well loved 20×14”, 12×8” and 14×14” configuration graced the pages of Ludwig’s catalogue and shop floors around the globe. The Clubdate outfit continued to be a winning drum set with customers into the early 1970’s and only began to dwindle in sales with the introduction of the Ludwig Standard sets (again, a story for another article) 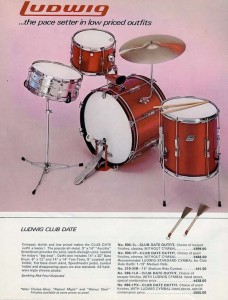 But why are these kits as popular now as they were when they were introduced? For some it’s still a matter of budget, and even in the world of collectors, unless you have a seldom seen finish in this configuration (such as Oyster Black Pearl, Citrus Mod, Mod Orange and Psychedelic Red) these drums do not fetch the price tags of a ’60’s Super Classic or Downbeat set. But the shells are identical, same ply construction, bearing edges and coating as their bigger brothers.

Some more scientific members of the drumming fraternity also sing the virtue of less metal work on the shell. One smaller lug with less mass on the shell is probably better than two single ended lugs, as it allows the shells to resonate more freely and produce a slightly lower fundamental note.

I certainly think the Clubdate proves less can give you much more bang for your buck, and definitely one to check out if you’re considering a classic Ludwig!