This month I’m looking at a snare drum that is becoming very popular here in the UK, the Ludwig Pioneer.

The Ludwig Pioneer snare drum first appeared in the 1960 Ludwig catalogue, marketed as a lower priced student drum.  It soon became a market leader in the USA at the lower price range, outselling its brand competitors that had similar models. Today it no longer has the budget tag – here in the UK the drum is becoming a very popular choice for use in the studio. 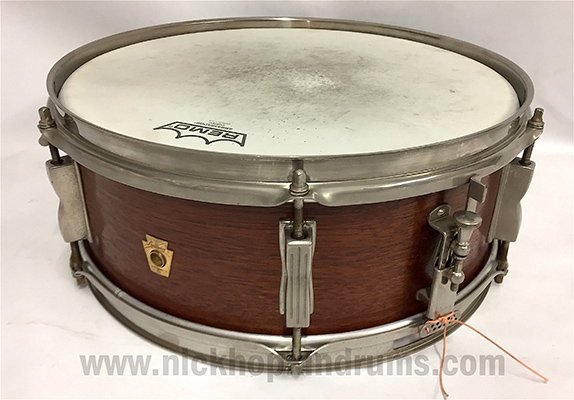 The drum is made up of a 3 ply shell with maple reinforcement rings. It featured six self-aligning lugs and triple flange hoops. Originally the drum featured a ‘Large Pioneer’ throw, and was available in depths of 5.5 and 6.5”. Finishes included mahogany, lacquer (two colour Duco) or pearl. According to the 1960 catalogue, these drums had no internal muffler / dampener.

By the time the 1964 Ludwig catalogue came out, many of the drum’s features had been upgraded. The interiors were finished with Ludwig’s exclusive (white) ‘Reza Cote’ with the claim that “this new Acousti-perfect shell design provides superior tone and response found in more expensive models”.  The snare throw had been updated to the P83, the drum also featuring the classic ‘baseball bat’ tone control / muffler. At some point in the mid 1960’s the hardware changed to chrome. 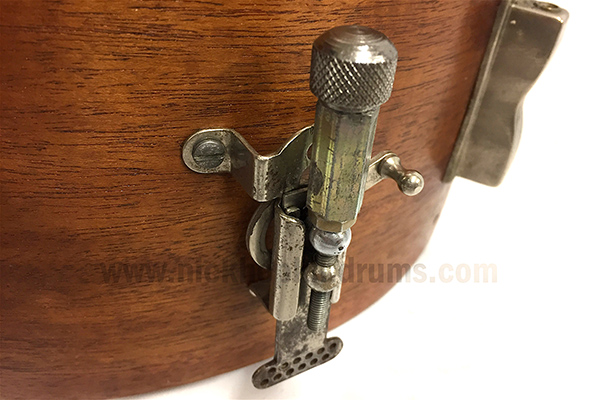 Some of the early 60’s drums have transitional hardware and features from the late 1950’s WFL drums, so as always don’t rely totally on catalogues to determine the originality and/or date of your snare. There are quirky drums out there that just came out of the factory that way. We have several Pioneers in the shop as I write, none of them are catalogue correct and show no signs of being tampered with. The first is a pre-serial in white pearl with nickel hardware and a rough ‘reza-cote’ interior date stamped 1960. The strainer is the later P83 in chrome, but its fitted with the late 50’s round knob muffler. Another is in natural mahogany with nickel on brass hardware and a red felt dampener (but a serial number that dates it to 1965)! As I always say, there are drums on the market today that are original but don’t match the pictures and descriptions in the catalogues. These drums were built to be played, mainly by students, in the 1960’s; it wasn’t considered that 60 years later we’d be discussing the colours of the muffler felts and whether a snare strainer matches the date on the shell interior!

The drum remained in production into the 1970’s, with features following the same pattern as other drums – updated lugs, snare strainer change from P83 to P85), Tone control muffler updated to round knob etc. It’s usually the 1960’s drums that pop up on the UK market, however, and they are becoming very popular among players. More and more players that call into the shop are asking after these drums for their tonal qualities; a lot don’t care what muffler is fitted or whether the hardware is chrome or nickel. They’re after that sound, and it is a different sound to the 8 lug models that were marketed back in the day as professional and today are considered more collectible. 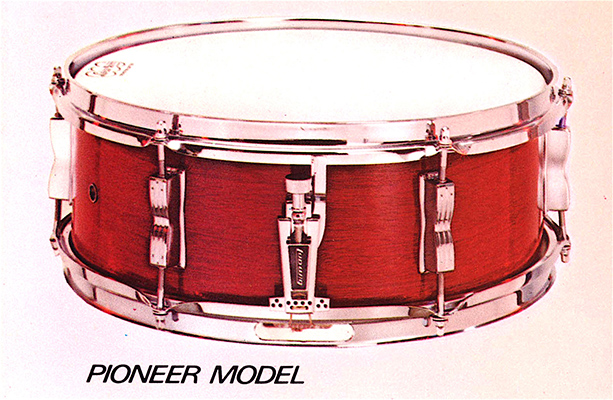 These snares produce a nice warm tone;  that typical vintage Ludwig vibe but with a brighter response than 8 lug models such as the ‘Jazz Festival’. Due to less tuning rods, these snares give a much more open sound and obviously you have a little less control over the tuning. They can offer great response and brightness when tuned high; tuned down low, with the snares buzzing a bit and your favourite damping, and youre hitting that lovely fat, but crisp, vintage thud. They all have a unique voice, and obviously some sound better than others; some just have that vintage Mojo straight off the rack at any tuning, some need a little work to find their sweet spot. I’d encourage you to go somewhere where you can try these drums and find one that suits the sound you’re searching. These drums are becoming a classic alongside another ‘student model’ snare drum from Ludwig, the Acrolite.