What Lays In The Plies 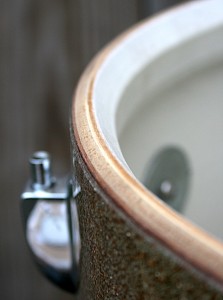 With current trends to know as much as possible about where your food is sourced, where the material for your sofa came from, and the name of your hairdressers dog, fixation on the details has reached new levels. This is especially true in the vintage drum world, were buyers and sellers obsess over the thickness of hoops, whether they are chrome over brass or steel, which Thursday in 1967 the kit was built etc. Ok, I may be exaggerating, but you get the idea.

On several occasions, when I’ve been talking to customers, they have told me the shell construction of a set of particular kit before even looking at the drums – “Oh yes a 1966 Ludwig Downbeat, that will be mahogany, poplar, mahogany”…..

Well, this is not always the case. 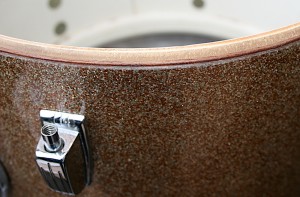 Many of you will know this, but for those who are fresh to this wonderful world of vintage drums, the shells were very often built from whatever wood was available at the time, or plies of veneer changed to suit the build depending on size or finish.

It is a well known fact that during the mid 60’s Ludwig used a predominantly mahogany/ poplar/ mahogany lay up to construct their (in)famous drum shells. The thin veneers of mahogany sitting either side of a thicker poplar core. These were then supported by maple reinforcing rings to help the drums retain their shape. 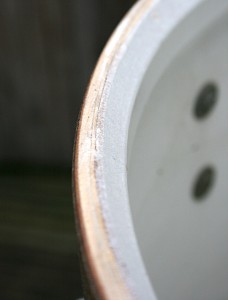 From around 1963, Ludwig began to paint the inside of all the drum shells in white. Before this, kits would maybe have one or two drums painted, or a lot of drums had ‘bare’ maple or mahogany inner veneers. Mahogany was commonly used as an outer ply on wrapped drums as the wood’s naturally more open grain allowed the glue to soak into it, giving the wrap a firmer bond. Lacquered or painted drums were usually finished in maple as it had a smoother finish and tighter grain which didn’t cause the paint to absorb so deeply into the shell.

We have a typical exception to the rule is stock currently- a 1965 Ludwig Downbeat Outfit, 20×14, 12×8 and 14×14 finished in beautiful Champagne sparkle wrap (first three pictures). These drums are a little bit different to what most people would expect from ‘typical’ shells of the time. By looking closely at the bearing edge you can see that the inner ply of all three shells is in fact maple rather that the expected mahogany. The thin, lighter veneer (maple) can be seen just before the (maple) reinforcing rings, and the interior white paint sits on a smooth, almost grain free (ie maple again) finish with little sign of absorption. 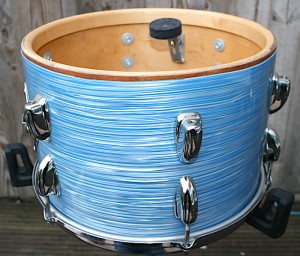 Slingerland were also well known for their maple/ poplar/ maple 60’s shell construction, having moved away from the mahogany/ poplar/ mahogany shells of the famous Radio King era in the late 1950s. But again, their drums were not always produced to the same construction guidelines.

We currently also have a 1965 Slingerland ‘Modern Jazz’ outfit, 20×14, 12×8 and 14×14 in Blue Ripple Pearl, a fairly rare and sought after finish (last two pictures). This wrap seems thinner that others used at the time by Slingerland and this could be a contributing factor to the shell construction. It can be clearly seen on this kit that all three drums have a mahogany outer ply that the wrap is adhered too. 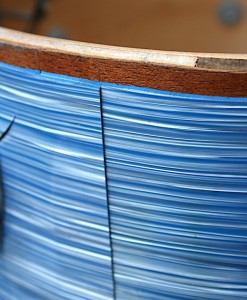 Although it is not always easy to spot, we wouldn’t recommend removing original paint to confirm the ply identities as it could damage the value. But it is worth remembering that the plies on our beloved vintage kit or our next vintage purchase may not conform to the commonly accepted ‘standard’, as there is no real standard!