AAA Tech Diaries – December 2019 – ‘Sometimes I Have To Pinch Myself’ 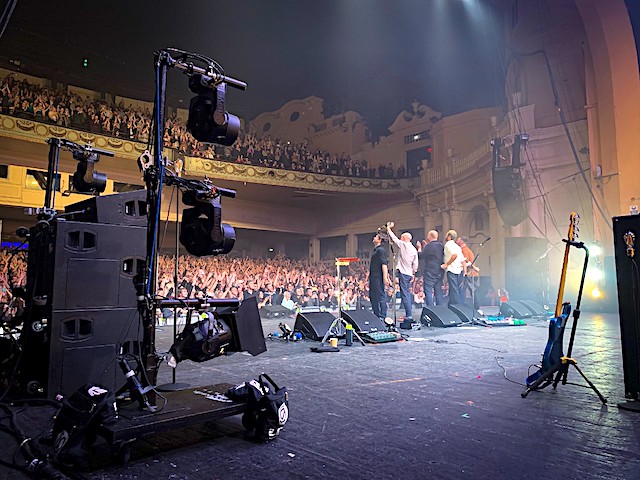 Hey everyone, and here we are again! How is it already time for December’s feature?! I hope you enjoyed last months feature and found it insightful! Let’s pick it up where I left off last month, well kind of…not the little rant about endorsements (sorry about that) but about  getting back into the swing of things.

Everything started to pick up again quite nicely. Bombay was picking up, a couple of days working with Hotei, and some more work coming in with Labrinth on his big return.

So pretty much right after we last caught up I headed out on a small UK tour with Bombay Bicycle Club for the 10 year anniversary of their debut album ‘I Had The Blues But Shook Them Loose’. We started with a couple of days rehearsals in Music Bank and then headed up to Liverpool overnight. We were doing five small shows over five nights including Dundee, Nottingham, Bath and London. 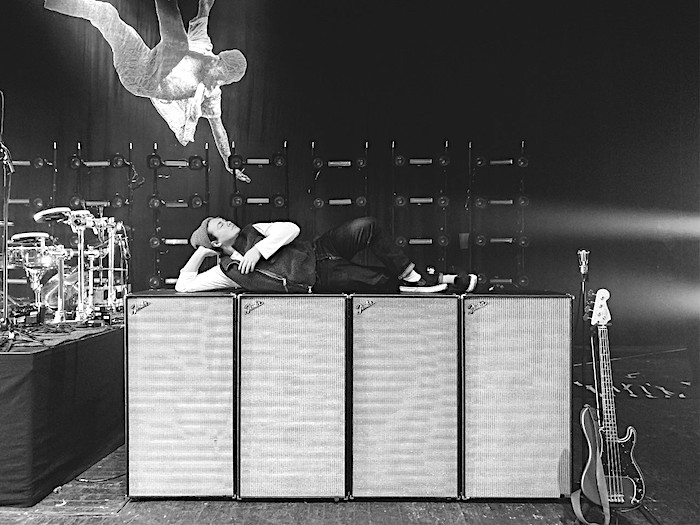 It was so good to hear that album in full. The reaction was amazing and the band played so well each night. Sometimes I feel very privileged to be doing what I’m doing. A lot of people would’ve killed to have been at one of those small shows celebrating a fantastic album, especially to be able to see it every night. Sometimes I have to pinch myself that I’m working for the bands that I grew up listening to and travelled around London or festival fields to see live as a teenager. In fact I often have to tell myself that that when times in the job are a bit more difficult than others. You have to think what you would’ve done back then to know that one day you would be sharing a tour bus with the people you would once stare up at from the pit.

On the UK tour it was also great to bump into Dave Philips, the AR from DW, Gretsch and LP in Nottingham. Suren the drummer for Bombay Bicycle Club recently signed with DW and Dave came down to catch up and take some photos during the show of Suren’s new cherry mahogany kit and all new DW hardware! It’s a dream to work on night after night. 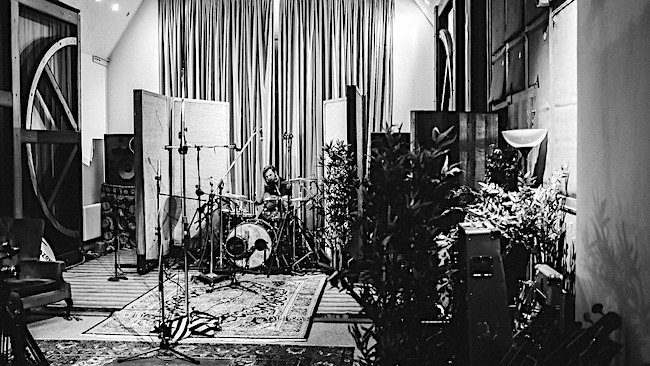 Now, if you follow my Instagram you’ll see that recently I was posting a little bit about The Amazons. They are another UK band I’ve worked with previously, and more specifically, around the time I decided to go freelance in the industry. They were there and gave me a shot when I was hassling them as a shop assistant in a drum store and asking to come along to shows and help out! Luckily when I made the jump and decided to quit my job some festivals and work was there to be had and I’ll always thank them and their team for the opportunity.

Anyway, I’ve never really touched on my time with them and thought it was about time I talked about my experience in the studio last November (almost a year to the day of me writing this) recording their second album ‘Future Dust’. I was honestly chuffed when the band asked me if I was up for going along in the first week of recording to Monnow Valley studios in Monmouth, Wales. A studio made famous by Black Sabbath, Queen and Oasis. I mean… that just says it all! 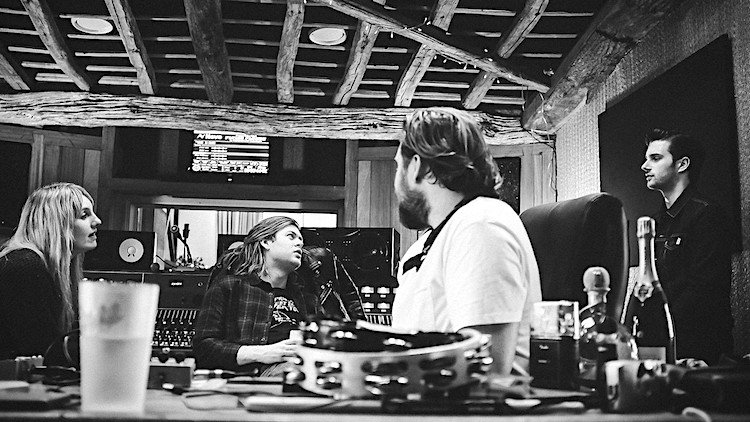 Prior to the recording me and Joe spent some time talking about options for the kit, like what kind of sound he was looking to achieve on the album. We talked a lot about what drums we would be taking into the studio and what drum heads we would be using for each drum. We were also very lucky to take a visit to Zildjian and see Tina to pick out a new selection of cymbals for the recording. We focused on what we thought would sound great in the mix and went for some slightly darker cymbals like the K Custom range and Kerope hi hats, which I think sound awesome on the record! It really seems to match the slightly darker tone of the record. 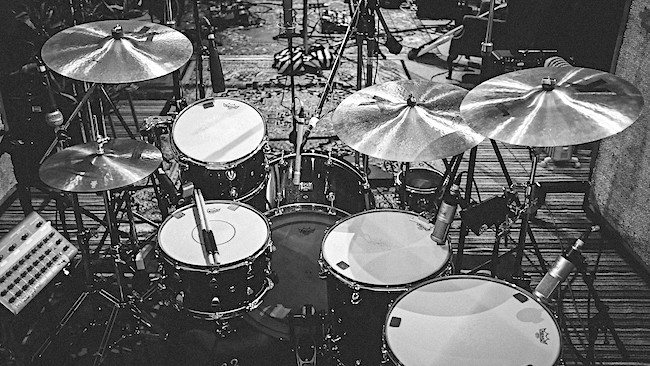 I drove up and met the boys on arrival, loading all their gear into the studio. We got the drums laid out and set up first. A lot of re-skinning of the kit was required and we aimed to get that great studio sound. It is such an amazing studio – like something I’d never really been in before – and I have been in a fair amount of studios! This was a residential studio where The Amazons would be tucked up for around a month and where I was staying for a week as mine and Joe’s goal was to achieve the best drum sound and drum takes as possible. If he was comfortable and it sounded great the rest would just follow.

The Monnow Valley live room must be known as one of the best sounding drum rooms around – one of the reasons it appealed to the Amazons, I’m sure. Joe is a force of nature behind the kit and the foundation for the boys to build these great riffing guitar tracks. I had such a great time that week with the boys and producer Catherine Marks. We were locked away in the middle of nowhere and it was so peaceful. The guys cooked great food. We drank, we sang and laughed a lot! But more importantly Joe smashed his drum takes and it sounds huge! We would work into the night, let the lights down low, set the mood and just run through takes until Joe was broken and done for the day. It has to be up there as one of the top three moments in my professional career, and I was extremely chuffed to receive my first album credit as it entered the charts in the top ten. 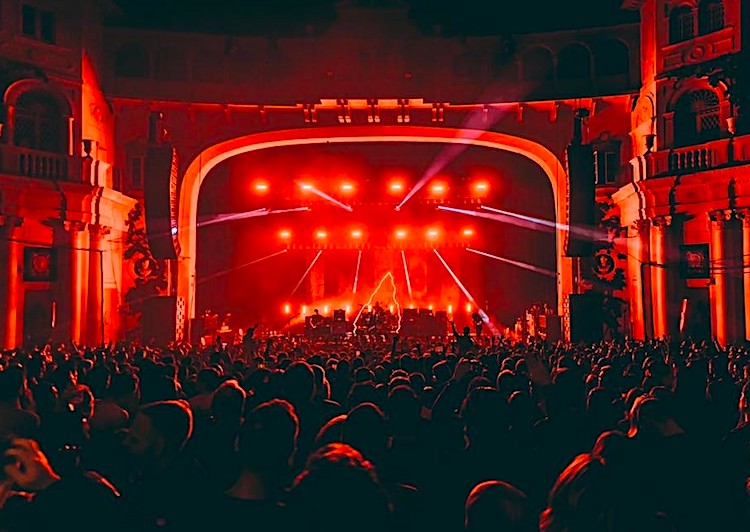 After the best part of a week in the studio, it was time for me to go back to my (then) new job I had just started with The 1975. They were starting on the new campaign and I was heading back into rehearsals and the first load of promo. Anyway, I can’t believe a year has passed and last week I went to see The Amazons headline Brixton Academy and I couldn’t be happier for the guys and all involved. It was an amazing show and it’s only going to get bigger from here.

Anyway, I’m currently on a flight to Munich to finish off the year and the end of festivals with Bombay Bicycle Club. I’m going to enjoy some time off over Christmas and catch up with you lot in the new year where it’s already looking like a busy one filled with plenty of touring! I’ll also fill you in on my time in Thailand with Bombay and give some insight on working an Asian festival. 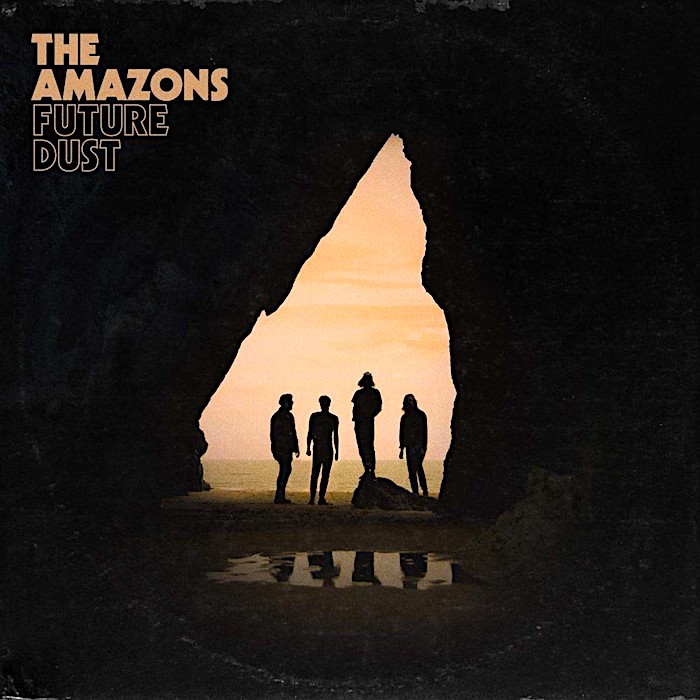 Don’t forget to feel free to drop me a message on social media, whether it’s what you want to hear about in the next feature, or if you have any questions about anything I’ve mentioned in the blog since we began, I’ll be more than happy to answer them.

I hope you all have a great Christmas and a Happy New Year!

Have a listen to the new Bombay Bicycle Club single here – https://open.spotify.com/album/2PQ2A2Gu1CxnWMYvPJ3j7C?si=2FUMCUgnTuuLkoPgnTjzfg 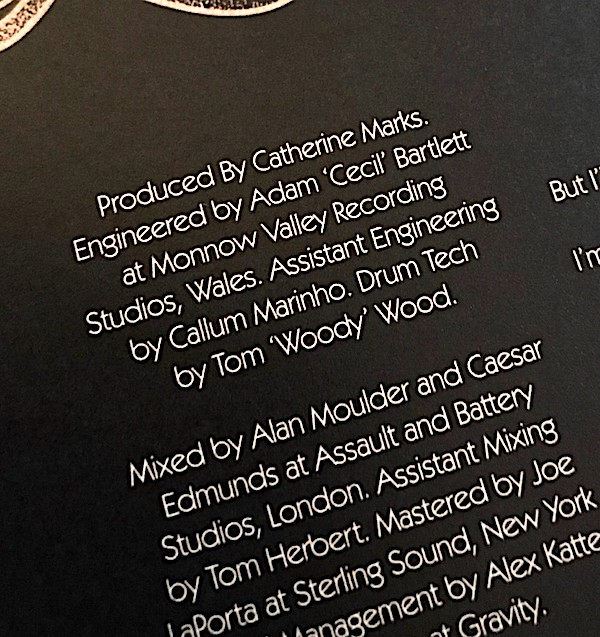