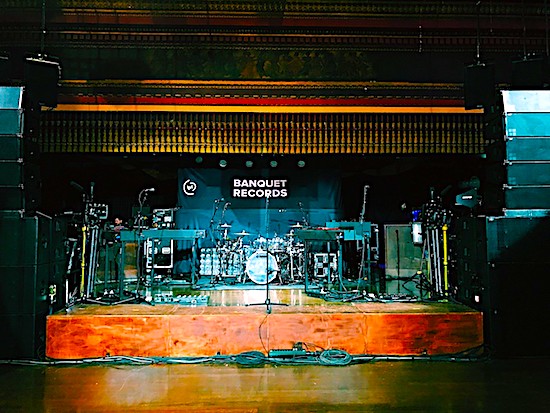 I hope you all enjoyed the first feature. Obviously, in that piece I covered everything on how I got to where I am now in my career as a drum tech. In this month’s feature I thought I would pick up from when I first started on this current gig with The 1975, and how I’m talking to you now from my bunk en-route to Cincinnati…

Let’s go back to last year, October 14th, 2018 to be precise, when an email out of the blue came through after a weekend away in Amsterdam. By this point I was just dreaming of a big work offer coming through, I felt it in my bones – something was cooking! It was the end of a busy first year going freelance and things were positive, but everything had suddenly gone quiet. I boarded a flight home from Amsterdam to London and I receive an email – ‘The 1975 Tech Position’. I nearly jump out of my seat – could this be what I was waiting for?! I opened the email and there it was. The production manger, Dermot Lynch, asking for my availability for the remainder of the year. 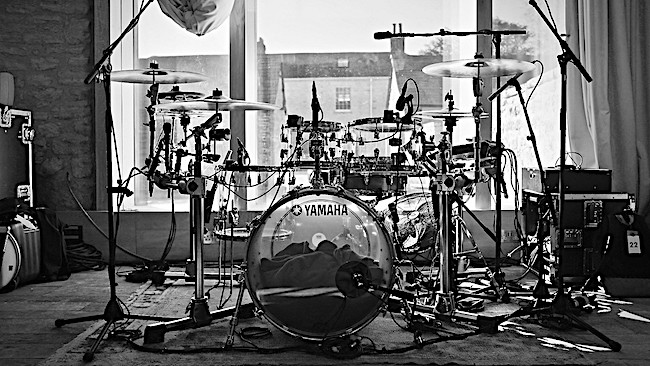 The first set up. Oxfordshire, October 2018

I tried to reply as quick as possible; play it cool or be excited?! I wasn’t sure, but with the plane about to take off I wanted to reply with something. We arranged a phone call in the following days to have a chat. We spoke on the phone and it was brief but I felt confident I had managed to say all the right things to secure the job. In the days that followed I found out a few other tech’s were in the running for this job and some of those my friends – it only made it harder!

It’s at that point you drive yourself crazy thinking “that person is more experienced” or “that person has been on THAT gig” etc. Around the same time I got asked for my availability for The 1975 I also got asked to work with two other successful artists and I couldn’t believe it! It’s like that saying ‘when you wait around for a bus then suddenly three come at once’! But after some sleepless nights and what seemed like the longest four days of my life, the offer came through from the tour manager and I was on board. I couldn’t believe it! A rough schedule was through and my start date confirmed – first up, a week in storage pulling out the A & B touring rigs and prepping for a new world tour. 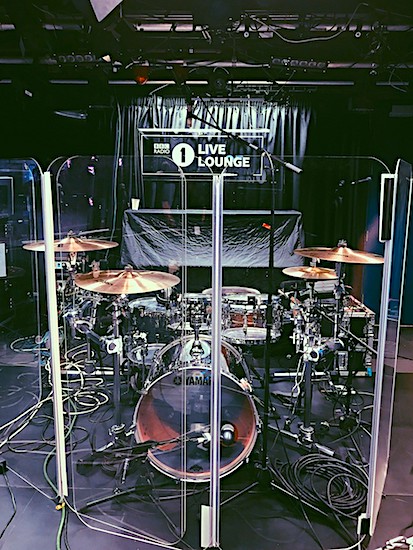 October 29th – Day one. Whilst pulling up at EFM Global (global freight and storage specialists) I see my mate Steve Rodd (keys and playback tech) from the a-ha tour (and the person who recommended me for this gig!) arriving. Instantly, I feel more settled. Shortly after that the rest of team backline arrive – guitar techs Matt Tag and Matthew Vangasbeck. We pull out both rigs and I get some time to come to terms with the mammoth task ahead.

I go through my flight cases, deep clean and see if anything needs maintenance along with checking what stock needs to be ordered for the coming months. After a few days of prepping the gear we load up the truck and everything got sent up to the bands studio where they were finishing their third record “A Brief Inquiry Into Online Relationships”. I spent some time up there in Oxfordshire at the studio getting to know George (drummer) and how he worked, along with the rest of the band and the audio/backline crew. We all set up in the snug live room and I set up George’s kit for the first time. I base it off photos I’ve seen and try my best to replicate his set up as if nothing had changed. 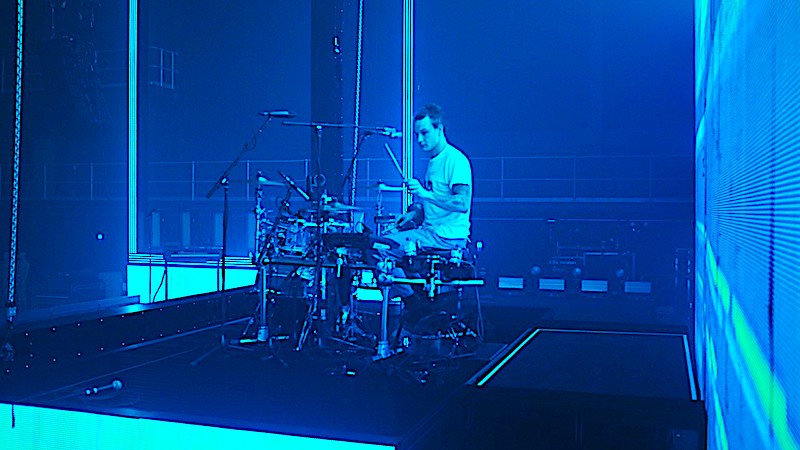 We spent a few weeks, on and off, prepping in a freezing cold barn next to the studio where we were storing and working on all the gear, using electric heaters to keep us warm. There were lots of long days and late nights, plus a fair amount of red wine, but it was great getting to know everyone, running the new set and songs from the upcoming album. I’ll never forget the first time I heard the boys play the instrumental of “Love It If We Made It”. There was something special about sitting on the floor in that dark, cramped studio late at night hearing these songs being played for the first time live. When George came in with that pounding 4/4 grove nothing could’ve wiped the grin off my face, I almost had to hide it! I knew I’d be in for one hell of a ride.

After some time spent up in Oxfordshire we move down to London and into John Henry’s (rehearsal studios) for final prep before the first live appearances of the campaign – Radio 1’s Live Lounge, Banquet Records and a tiny release show at the Camden Barfly! All of which I was luckily very familiar with – I had done Live Lounge a few time’s with Craig David, along with playing multiple shows at Banquet Records and the Barfly with my own band, or working there with the smaller bands who helped me get to where I am now. 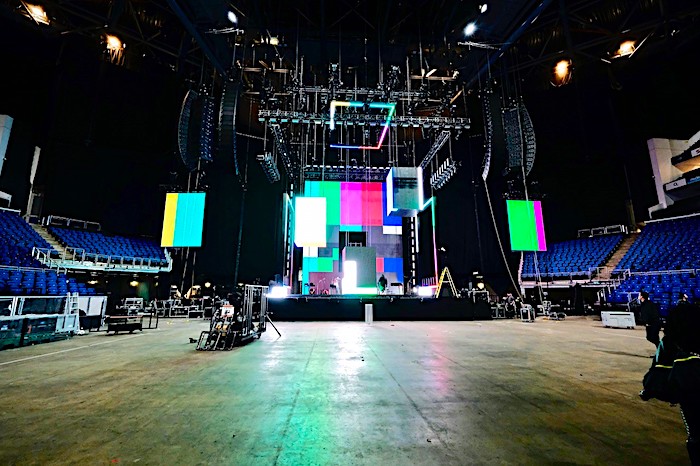 All the shows went great and were a big success. The boys achieved their 3rd UK number 1 album and got the campaign off to a great start. We moved over to production rehearsals for the remainder of December at LH2, Park Royal to rehearse for the UK/Ireland arena tour.

This was the first time I got to see the scale of the huge production and meet the full touring crew. We took out 10 trucks and 4 tour busses for that tour – it was just huge. There was a treadmill across the front of the stage that Matty would walk on in songs such as “Sincerity Is Scary”, there were three LED cubes and a rectangular LED blade (the bands recognisable logo) on automation that would come down from the ceiling and there was also “the cave” which Matty would be lifted up into by a scissor lift behind the drum riser. Yeah, you read that correct! We spent a month locked in LH2 running the live set and building our rigs during the day and through into to the night. Plus lighting and video would work over night programming all the visuals for the show. 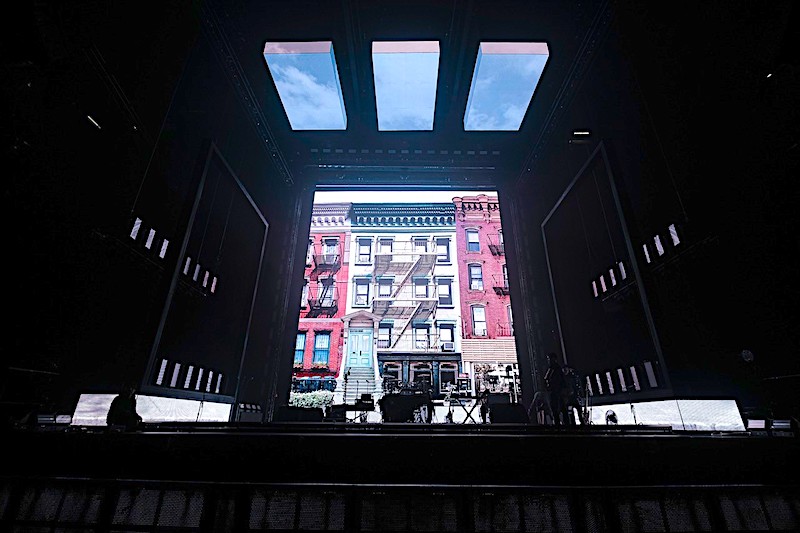 Here’s the slightly nerdy bit and some gear chat! In that time we switched George’s electronics from the Yamaha DTX900 module to 2 x Roland TD-50’s – one main and one back-up. I ordered up the module’s from the guys at Roland and Steve Rodd (the genius that he is) built the drum racks for both rigs. It was a huge task, I had to export all the individual sample’s for every song that the band might play on the tour then import them to a new patch on the TD-50 and assign every sample to each individual trigger (there was around 200 samples), then set the volume and panning for that specific sample. We also put George’s ButtKicker amp in there so everything was in one place.

We ran all the cables from the rack across stage to the drum riser. We had a metal grated riser to allow the lights within the riser shine through from underneath George and we managed to run all audio and electronic looms up through the riser to make it look as neat as possible. For such a visual based show EVERYTHING had to look as neat as possible. As there was a grated riser I had to fit metal cups to the top of the riser for the bass drum spurs, hi hat and floor tom legs to fit in otherwise they would’ve fallen through! That was a big task in itself – making sure the positions were perfect for George as they would stay the same for the remainder of the world tour. 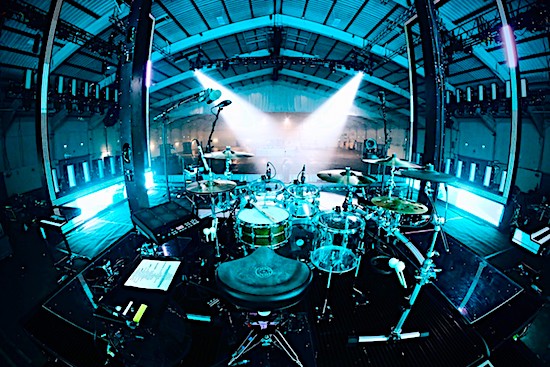 The live set up and view of the riser. Exeter, January 2019

We worked right up to Christmas and had a little break until the 2nd of January, then it was right back to it! Final prep, rehearsals were finished and we set off for Belfast and 11 dates around the UK including two nights at the London O2. With the UK tour underway and off to a great start the reaction was a good one and we were on a roll.

I just wanted a tour. A campaign. A world tour. And it happened!

See you on road,