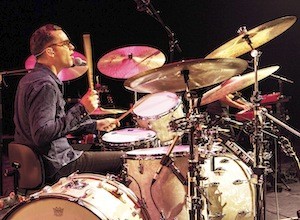 Gerry Morgan is not only a specialist for solid and deep grooves but his passion for vintage drums and all kinds of quirky little percussion instruments make him the perfect candidate for this drum chair – which has been keeping him busy for the last two years.

I caught up with Gerry just before he headed of on tour to America.

You’re known as a ‘song drummer’. What influences did you have over the years to push you in that direction?

Growing up I would have listened to Keith Carlock, I love Steve Gadd (who doesn’t), Jay Bellerose, Levon Helm, Aaron Sterling, Steve Jordan, Jim Keltner, new boy Griffin Goldsmiths from Dawes, oh and I really love Jeremy Stacey’s playing – just all those sort of chaps. I just like a deep groove and pocket/beat players. I think it’s quite important to know your place as a drummer and understand the role.

I know your first experiences with the music industry already came during your time at uni. Tell me more about that.

Yes, I moved to London when I was 19 to attend Goldsmith College. I studied a lot of improvisation and a lot of contemporary forms of jazz but meanwhile I was setting up and writing a lot of songs for my own band which subsequently ended up getting signed to EMI at quite a young age. It was nice. We made a great album, got playlisted on Radio 1, a few TV things and major festivals, a few tours but it all didn’t last very long. That was my initial taste of the music industry.

So that was your first professional gig?

Yeah, it was my first professional touring and recording gig on a major. But I started gigging as young teenager in Ireland, starting at 12 doing my local theatre shows in the pit, pubs and clubs, and touring artists from Ireland, doing more formal concerts in the likes of London’s The Albert Hall or NYCs Carnagie Hall.

I managed to fit a lot of different gigging scenarios in during my teens, and my dad was the best roadie, (haha) 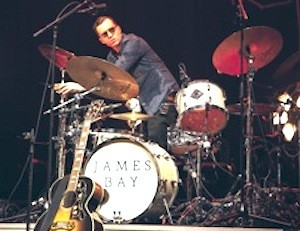 Yeah, but I’ve always been doing all sorts, you know. Orchestral, big band jazz, math rock band, pop bands, and rhythm & blues was a massive thing for me.

Do you think it’s important nowadays to be ready to do a bit of everything?

Yeah, I think so. Recently I’ve been even playing some keys on gigs. I did a lot of promotional tours across America, Europe and Australia. It was a two piece set up so I ended up covering a few parts, playing percussion and kick drum with my feet, while singing and playing keys parts. It wasn’t a role I was used to being in but I pushed myself to be comfortable. In recent tours I’ve been handed other instruments and told learn those parts. A welcomed challenge but good fun in the process.

Yeah, I’ve been working with James for about two years now. I bumped into him on another tour we were both on. I was MDing and drumming for a duo at that time. Every night I watched James on his own and just thought: my kit is set up on stage, I’d just love to get up and play with him. As the touring progressed we got chatting more and more. He’s a super nice guy and we come from the same place musically.

I couldn’t think of a better people to be working with. Great hangs and James has giving me some great opportunities.

Are you MD-ing the gig?

No, not at all. James pretty much MD’s his own project. It’s his music and he’s a bad-ass musician. He’s a legit guitar player, legit singer, legit producer (I’ve worked with him on many things in the studio). He’s the real deal, so he knows exactly what he wants you to do and it’s my job do it to the best of my ability.

You’re doing backing vocals on that gig too, right?

Yes, I do a lot of singing. I also have on different projects and I think it’s very beneficial thinking back about what we discussed earlier about covering many things. It’s the same about all the auxiliary percussion stuff I like to use. You can separately book a drummer, a percussionist and a backing vocalist – but if you’re a guy who does all three… 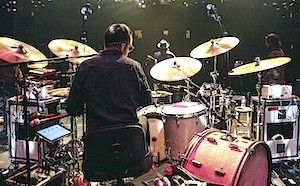 I’ve seen a photo of your current set up. Big cymbals, vintage auxiliary kick facing backwards played with your heel, lots of small percussion – it’s quite a special kit.

Yes, big Zildjian cymbals. My smallest one is a 19” or 20”, I use 16” hi hats, I just love big cymbals. I actually just added a 16” crash because I needed something fast and short. A lot of guys use them as their main cymbal but to me the 16” almost sounds like a splash now.

That photo you saw is probably the nicest kit I own at the moment. It’s a Slingerland 1964 White Marine Pearl and I use an additional kick which is a 1939 Radio King which I have the whole kit of too. They are beautiful drums, so many studio and live engineers have fallen in love with it. After a while I decided to take it off the road though, it’s suffering a lot so I’ve put it into hibernation. I must take it to Yard Gavrilovic, as he’s the man for kit restoration!

For the last few months I was using a ’65 Ludwig Super Classic in Champagne Sparkle which I picked up from Mark Jeffs of Rusty Drums.

This weekend I pick up my new kit. A Levon Helm inspired creation much like his WFL Mahogany Maple Hoop kit. A tip of the hat to the late great Levon. The lovely people at C&C built me a kit that looks very similar to that. I got a 22×14 Kick, 13”,16” and 18” Toms and a second Kick drum, which is now gonna go out front like a double kick set up, which is a 24×10. All that with one matching snare and another brass over aged copper. The kit has been sitting in a lock up in New Jersey for a week now waiting for me and I just can’t wait to get my hands on it.

As far as the percussion goes there are a lot of tambourines and shaker parts on the album and I just like to do them live. So sometimes I’m playing 16ths with my left foot on a tambourine while playing shaker with my right hand and the main groove in the sticks. On the road I have all kinds of different stuff, gospel tambourines, African Goats Toes, Peruvian seed shakers, spring drums, I even had tongue drum for a while I picked up in Nashville. The list goes on and on. I travel with a massive case with lots of ethnic percussion, if anyone wants to try a specific vibe, I’ll have a pallet of colours that I can immediately grab and sparkle my groove with.

Has collecting all those small percussion bits always been a passion?

Yeah, always man. Especially when I’m on the road in America I’m always picking up some sort of weird thing. I just picked up a ‘Percussion Fiddle’ in Revival Drum Shop(a favourite shop of mine). It’s just a passion of mine collecting weird and wonderful things. Especially strange percussion always catches my eye because I like the uniqueness – that’s what I’m after. Social gatherings at the apartment end up of very percussive at times (great neighbours! ;-).

That sounds like a great concept for an album!

I could well do that, but it would be very strange “The Soundtrack to my Mind” [laughs]

Most of the artists I found related to your name are from a folk/rock area. Has that always been your chosen genre or did you just slip into it?

I love American music and their drummers, love Americana, roots rock and I’ve played with some great Americana artists as a pick up drummer while they tour Ireland and the UK. I love working with singer/songwriters, recently they’ve been acoustic led but I love getting stuck in dirty with some rock n roll. I suppose I’m attracted to what I love. 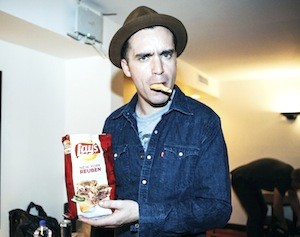 Talking about that, do you have something like a dream gig?

Hmm, I don’t know. Artists who I’m digging this year would be Blake Mills, David Ramirez, Foy Vance, and of course its be great work with people like Ray LaMontagne and Ryan Adams.

Do you have time for other projects at the moment or is the James Bay gig a full time job?

I do get approached to play for different people but at the moment I’m happy and content where I am. JB keeps me very busy and I enjoy what I’m doing and the way my career is developing.

I’m out again with James Bay this Sunday. I spent most of this year in America and we’re going back out there for five weeks, then back to the UK for week, back to America for a long weekend and then Europe.

I’ve been around the world a couple of times in the last few months, doing 360’s in the space of a week or so which is a strange thing but a very enlightening experience. What an amazing thing to share with a great bunch of people, while doing something you’re so passionate about.

Thanks a lot for your time Gerry. Have a great tour!