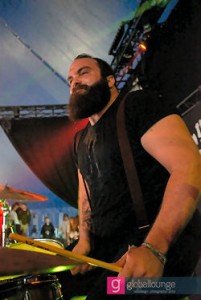 Swung, loud and being a tiny bit crazy has characterised rock’n’roll drumming since its beginnings. Whereas many bands today took the genre and modernised it, there is one Australian combo sticking to the raw original style. Hailing from London, The Graveltones have just released their second album and are on the way around Europe to show how it’s done.

Drummer Mikey Sorbello truly convinces with his high energy playing, a creative new approach while paying tribute to the roots, and simply a huge sound. Great to watch, a pleasure to listen to.

I caught up with Mikey before a secret gig in central London to talk about his move from Australia, his band The Graveltones and his passion for coffee…

Born and raised in Australia, when did you move to the UK?

Just ticked over five years now. I got to a point in Australia where I had a teaching business, I was gigging and recording lots but I just felt like I couldn’t go much further. I kind of wanted to just start again – a fresh start into a new chapter and try to approach everything completely different this time. 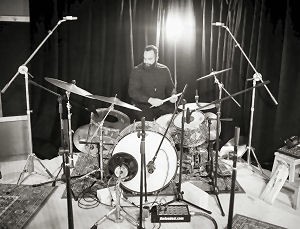 How does the Australian music scene compare to the British, now that you’ve seen both sides?

The Australian music scene is very tight. Musicians are quite lovely but very competitive, which I think is healthy for a young musician. Everybody is trying to outdo each other so it pushes you and makes you practise. In that sense it’s really good, but as far as gigs go…

you only have six major cities that you can really get around and only 23 million people in the space of all of Europe. That’s a lot of travelling for a few gigs.

What were your first steps here in the UK then? Was it just a ‘I’m packing my suitcase and see what happens’?

That was the initial idea, yes, and I wanted to start sessioning and do a bit of teaching but it just worked out very differently. I ended up playing rock’n’roll for the first time in my life, which is my main band now. It completely didn’t turn out the way I was expecting. 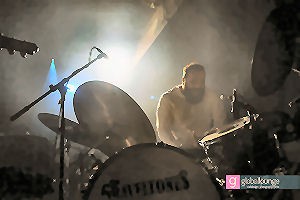 Oh really? What was your preferred genre back home?

I was playing lots of funk, latin, some swing things like that. I’d never book myself on a swing gig but hey, I enjoyed playing it. [laughs]

So a band wasn’t actually intended? How did the Graveltones come about then?

It was 2011, a little bit after I moved here. I was working in Rose Morris in Denmark Street selling drums and Jimmy was selling guitars across the road. He booked a gig and needed a drummer. We did the one gig, got a really good response – a couple of weeks after that we were gigging four nights a week.

You just had the new album come out, what are the plans for this year?

Yes, from here it’s all a bit hectic. We’ve already done a lot of in-stores gigs and from July we start touring full on: Norway, Scandinavia, Italy, Germany and so on. We’re doing lots of our own shows and then hitting the festivals next year. 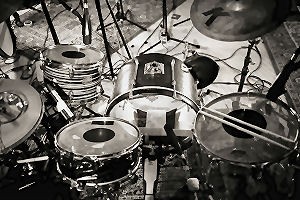 Seeing as the Graveltones are only a two-piece band, does your role as a drummer change? And if so, how?

It definitely does. That’s a big question.

I like to swing, like things to shuffle and have a pocket. I guess I use a lot jazzier elements in rock’n’roll, kind of similar to the way rock’n’roll started. Jazz drums on rock’n’roll was a natural progression and I think I kind of approach it like that. It’s a bit busy, a lot of ghosting and lots of textures within the groove.

Do you feel the need for that to maybe fill up the space a bass or a keys player would usually cover?

Sometimes yes! But sometimes you can really keep it bare, extraordinarily bare, and that space is more than if you were playing off your t*ts. [laughs] 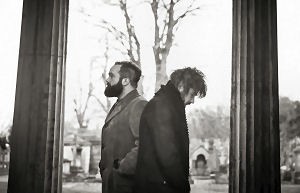 Do you sometimes miss a bass player in the rhythm section?

In this outfit I don’t feel like I miss it: Jimmy has a great little pocket thing going on and we work very well together. I do sometimes miss playing at that other side of drums though. Tighter kick drums, tighter drums and then just laying it down – and then having that sensation of a really nice bass player just sitting there. Ultimately that’s a beautiful, beautiful thing.

I guess my style changed a lot now. The way my kit is tuned it doesn’t really work in a bigger setting. My bass drum is far too open, the toms are nice and ‘ringy’, everything just has that openness. So for me to go back I kind of feel like I would have to re-learn to play like that again. It’s strange.

I have seen you playing a solo using the ‘inflatable tom’. How did you come up with that?

[laughs] When I was at school I was a bit of a smart-ass. I played in the jazz band there and one day our teacher said: “Everyone who can blow into their instrument, play it!”. I looked at my floor tom, saw a hole and thought that might work. 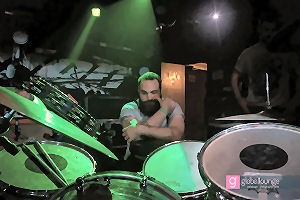 I picked it up, blew into it and started hitting it. I was so surprised by how much of a tonal difference I could get out of it just by blowing into the drum – it was more than an octave. I mean, you can blow that thing up to the same pitch as my snare drum.

On the way home I asked my mum to stop at the local hobby shop, went to the piping section, bought a piece that fitted, went home, plugged it into my floor tom and started to play with it.

There’s actually a song on our first album called ‘Crime To Be Talking’ and I do the whole groove just using the pitching of the floor tom. It sounds like I’m playing the snare drum at the end, but it’s all the tom.

Talking about your set up: your toms are at an angle if I’ve ever seen one! Did you ever have any trouble playing heavy rock music using traditional grip?

No, absolutely not. For as long as I remember my snare has always been at an angle. I think I decided to play traditional grip when I was 12. You know what, I think I went to trad., because my left hand sucked so bad! I thought if I switched to trad., I would work hard. I’ve got weird calluses now from playing loud trad. 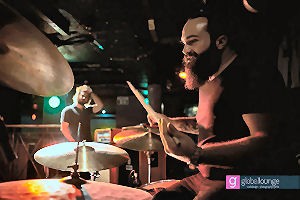 I’ve always felt the twisting motion more natural and I’ve never had an ounce of trouble with my left hand. I even hold my sticks right at the back, that’s technically not correct. I once had a Canadian drum teacher and he told me to practise my traditional grip by holding the stick at the very back where there’s no bounce and practise my doubles that way. Due to having less bounce you start using your fingers a lot more too. And that just always felt good. Same with the angle of the drums: it felt good on the snare, so I put the same angle on my rack tom – that made sense. Why should I move from that angle to a tom facing me? For my floor tom, I don’t actually care what angle that is… [laughs].

I’ve read about your work with coffee. How did that come about?

So when I started working I just couldn’t believe how badly they paid me, there must be something that’d pay me a bit better. At that time there was this cafe that I went to and drank coffee every day and they offered me a much better paid job. I decided it’s probably better for me to not work in a drum shop cause it just killed me looking at them when all I wanted was playing them. So for my sanity going to make coffee was a much better idea. That naturally progressed into roasting coffee and getting closer involved with farmers and importing coffee. I really found that interesting and gave a lot of my energy to that but since my band got so busy I just don’t have time for that anymore.

From time to time if I’m around I help out at the roastery I work for: a little bit of extra money and I never have to pay for coffee – WIN! [laughs] So yeah, basically I just do that for the free coffee… 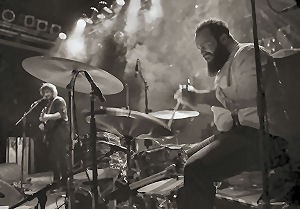 Love that! I’m kind of a coffee addict myself.

You know what, there are so many drummers in the coffee industry! I can guarantee you if you go into a good cafe that serves very good coffee, one out of three times there’s usually a drummer working there.

Part of my job for the roastery was delivering coffee, so I’d go in and start tapping on the counter and they go “Ah, you play drums, I play drums too…”. [laughs] There are some serious heavy cats making coffee out there, it’s crazy!

Talking about jobs on the side, a lot of independent original bands seem to struggle a bit making a living out of it. How do you guys cope with the changes in the music industry while being ‘on your own’ (if I can say that)? 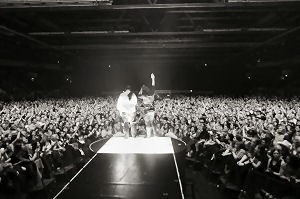 We’re definitely on our own, yes. When we started it was a conscious choice to work very hard and that’s we were playing 4-5 nights a week, sometimes doing two gigs a night. Quite regularly we would play, pack up and then drive to another venue to play again. Me riding my bike, cymbals on my back, snare on the handle bars pounding it to the next gig.

But yeah, it is a serious thing: it’s swimming upstream, but that doesn’t mean you can’t get upstream. It just means you have to work really, really hard to be successful. If you want to remain independent, own all the rights to your songs and so on, then you’ll have to work even harder; but then every little step you make along the way is so rewarding.

Fair enough I sometimes have to go back and make coffee but it’s only here and there now, which I’m really thankful for. If you get a strong fan base, you know, they are YOUR fans. They’re not giving their money to a record label that then goes: “Well, your album cost that much, so here’s £2.50, get yourself a Latte…”. [laughs]