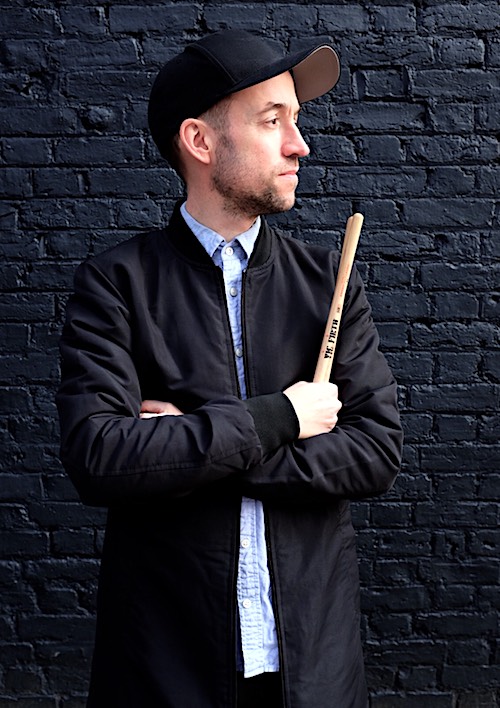 In a world where it sometimes feels like a lot of drummers are chasing a similar sound, Richard Spaven’s unique approach to drumming provides a very welcome change. Comfortable in all possible genres, Spaven ‘weaves a thread of jazz throughout each one’ adding his personal note to every project while still maintaining the song at the front of the focus.

This humble and tasteful approach makes him not only one of the most exciting drummers on the London drum scene, but also an in-demand musician on the world’s stages touring and recording with artists such as José James, Flying Lotus, Gregory Porter, The Cinematic Orchestra, Guru’s Jazzmatazz, and many more.

Besides his busy schedule as a session drummer Richard also composes his own music and sells out shows with his trio in some of the worlds most renowned jazz venues.

I caught up with Richard at the UK Drum Show in Manchester to chat about his passion for jazz, composing his original music and how growing up in London influenced his musical upbringing.

Perfect answer! Next question: you were brought up with jazz music to meet people.

Sort of, yes. My teacher when I was 8 years old was a big band drummer, so it was more that this was all I knew, rather than my dad feeding me Max Roach records or something like that. He took me to see Buddy Rich and that was my centre to start with. My parents themselves weren’t musical but very encouraging. 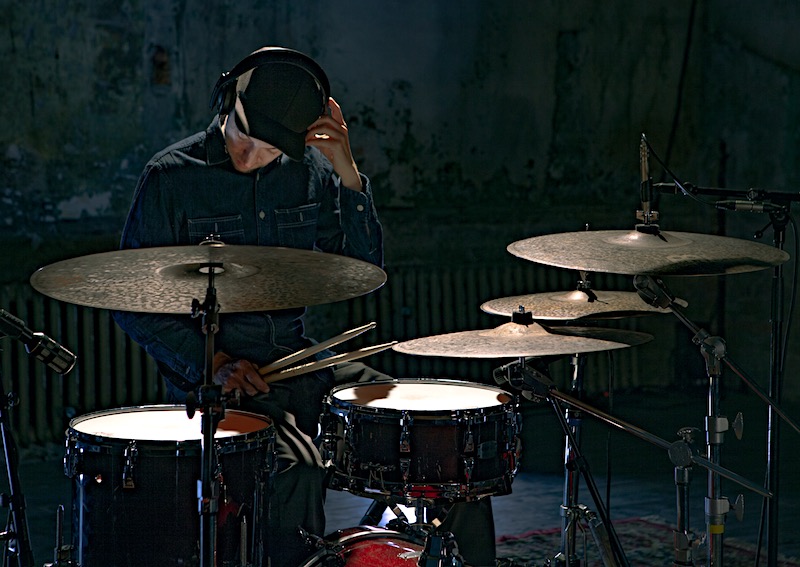 So when did you pick up the drums then?

I don’t really know what triggered it off, it all just happened. Pots, pans and buckets stuffed between the sofa cushions to get the angle right and just going for it. I did that so often that my dad decided he would get me lessons.

So it was all self-taught at the beginning?

Yeah, and it continued that way. I didn’t go to college anywhere but leaving school at 18 I did a lot of practise during my last 2 years there. The school work sort of went downhill. When I left I went straight into gigging in London and got to play with some great bands who taught me a lot. Playing with Louise Mills and Robert Mitchell in particular was a big learning curve.

What was your way into the scene then? Seeing as you didn’t have the music college experience to meet people.

I won this little scholarship to a Brixton based workshop. I started going there part time getting free drum and piano lessons and that was where I started to meet musicians who were doing gigs around town. I got my first London gigs from that and it just carried on. It was mainly jazz but I would play anything really.

I read someone describing you with the words: “Skills of a jazz drummer, mentality of a club-goer”. 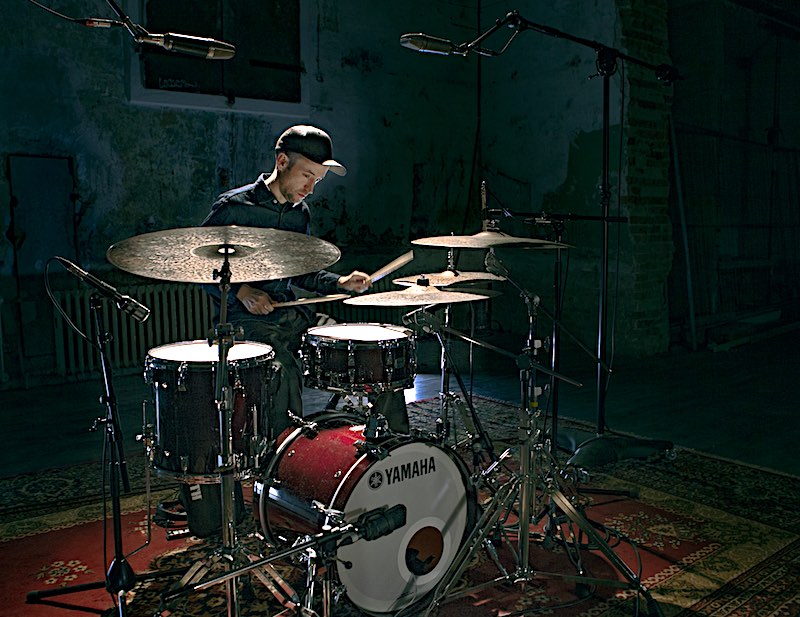 Coming from that jazz background and then playing a lot of programmed music must be a very different approach.

Broken Beat is a good example for that. It’s around 120/130 bpm with really searing, broken up, fierce drum patterns but has jazz harmony going on. It’s dance/club music but it’s not jazz. It’s a very London centric thing. That was a real eye-opener to programmed-world meeting jazz. I used to go to those clubs and shuffle about in my lame dancing fashion, and living that scene, again, is where the authenticity comes from. Seeing all that go down was really exciting.

So the scene in London was a big influence on you? You actually once said: “Stylistically everything I do could be boiled down to being from London”.

If you took London out of the mix, I think I would sound very different. I’m sure there would be other influences but I can’t imagine it.

London was a massive influence on me because there was just one musical influence after another. And it still is, that’s the thing. For example drum’n’bass for me involved going to Goldie’s Metalheadz sessions. It was such a musical experience going there and you were always hearing things for the first time which gave you the feeling like you were part of the discovery of it. You were part of a scene in it’s infancy. All of us who were there are still talking about it. Those days were really special. Incidentally, I’m actually doing a studio session with Goldie this week!

So it was always gonna be London to settle for your career?

It doesn’t make me less curious about other places, but coming from London just means it’s so ingrained. With Broken Beat and now dubstep, it just keeps happening here. I don’t see that happening in other cities to be honest. Berlin is the electronic music capitol of Europe but it’s just different. The way London generates new things is amazing. I love that. Just jump on it and get into it. 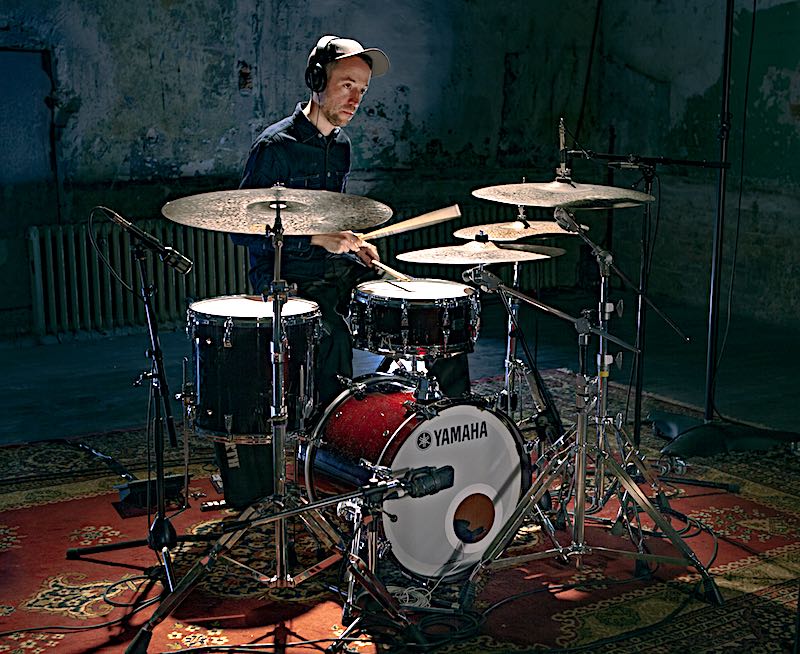 Why do you think it is like that in London? Is it all down to the various cultural influences?

Look at jungle and drum’n’bass for example. If you would take West Indian influence out of the music in London, it would sound very different. The real integration that is happening in London with scenes combining, sharing, creating amazing stuff and bringing in their influences is incredible and unique.

You mentioned you’re coming more from a live band background but you do lots of sessions too. What’s your preference?

The sort of sessions I do would be people that ask me to come and play because they want me to sound like me. I’m not the guy who turns up to a pad of dots for me to read.

I like to do both. I like doing a really good job on a session and walking away feeling like we really got something good. I just played on Jordan Rakei’s new album a couple of weeks ago and that was one of those sessions. A track on there is one of my favourite performances of me doing me. But also – playing music you know really well live with a band where you can stretch out is another great feeling – the zone. I want both to be honest. I like the variety.

So you’re currently focusing more on other session work?

Yes, there are lots of things going on. As I mentioned I just recorded on Jordan’s album; I also made an album with Alfa Mist who’s a pianist very much in the Jordan Rakei camp (we’ve written some stuff that we recorded); and I’ve been holding down all the gigs that I normally hold down. On top of that I’m still doing my shows. We recently played Ronnie’s and did some gigs abroad. 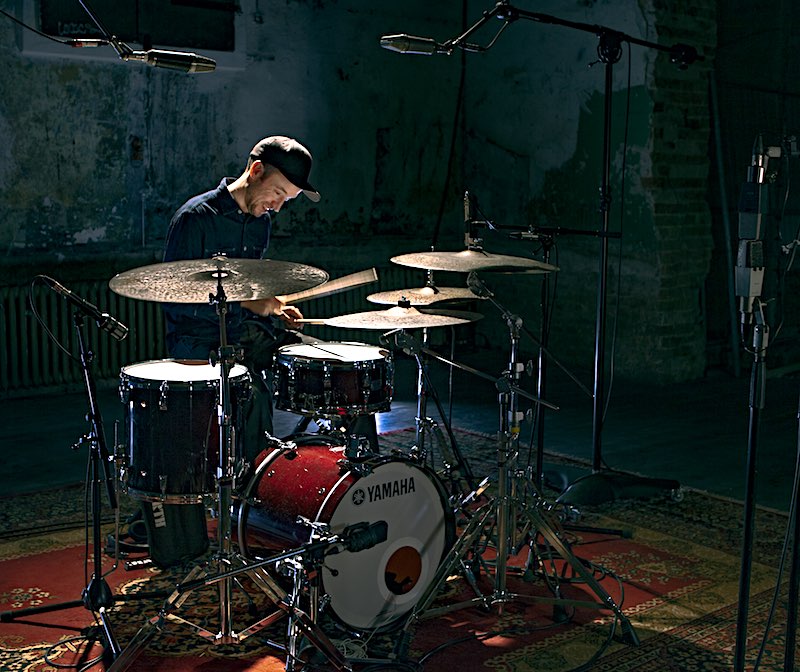 Talking about your shows: you’ve recently released your new album. Has writing original music always been a passion?

I always worked on music in the background but felt the focus was playing drums with other people. It got to a point where I had a lot of stuff unfinished and didn’t really have the motivation to finish any of it. At some point the label ‘Jazz Refreshed’ approached me and said they’d want to release some of my music. I was really taken aback by it but it totally changed my mindset. I finally had somewhere to present this stuff, which was the necessary kick up the arse to finish the songs. As hard as it is to know when something it actually finished, I really got addicted to it. Playing with other people all the time is amazing but it’s so great to have your own thing as well. When you play with an artist and input your ideas, they quite often just ask you to stick to the original parts. When you have your own project you can just bring out all your own ideas. That’s really important for me.

And it looks like you’re not short on ideas. This is your 4th album already?

Yeah. There was ‘Spaven’s 5ive’, ‘Whole Other’, ‘The Self’ and now ‘Real Time’ [released 2nd of November 2018]. We recorded this recent album at Real World Studios, which is Peter Gabriel’s place. It was absolutely incredible.

Recording drums there is just the best drum sound ever. We recorded it all there live in one room. Man, they had to drag me away from there.

What is your process for writing music? Do you mainly write alone or with your band members?

Its a mixture. For ‘Real Time’ the track ‘Rescue’ was was the first thing I wrote. Following that, myself and Stuart McCallum wrote ‘Faded’ and ‘Loved One’ all in one day up in Manchester which we were pleased with. That beat on ‘Spin’ is what kicked off that track – and I shaped it around that. 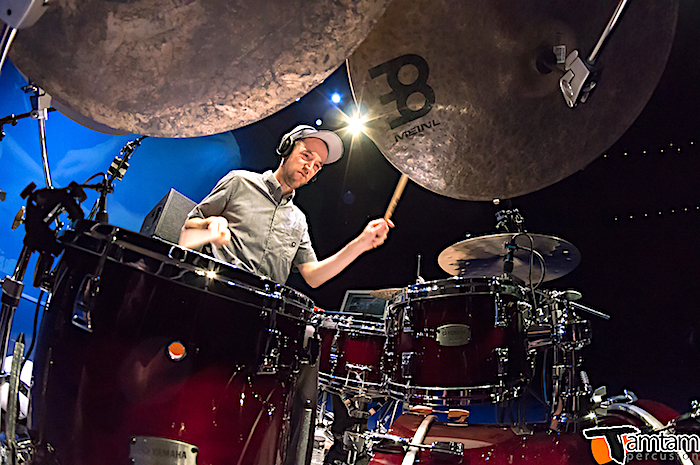 You also offer ‘no drums’-versions of your albums. Is that somewhat in conjunction with your performances in the drum show scene?

Yeah. I think I’m just sort of offering my concept a little bit. ‘The Self’ for example. If you take that tune drumming-wise, there’s this simplicity to it of having the snare on 2 and 4. We all can relate to that. There is also a lot of space and hardly any kick drums. But then the hi hat pattern is really weird and goes across the beat. If you’re trying to play that and actually try to make it groove, you’re learning quite a lot about where I am at as a player and writer. I love writing grooves like that. I don’t want them to be complicated but I like a little element that’s just for us guys. It doesn’t throw you off or makes the music feel naff in any way but it just adds a layer of interest.

You have just performed here at the UK Drum Show and are actually doing more and more of these events. Is that an environment you enjoy playing in?

The first one I did was the mikedolbear.comroom at the London Drum Show and I was super nervous for that. It was really nice to find out how open-minded the drum scene is. They were completely open to everything I was talking about and I wasn’t expecting that. Since then I’ve done more and more. Some highlights were the Meinl drum show, WikiDrummer, TamTam festival and the drum festival in Dresden (Germany) a few weeks ago that I played with my band. As a drummer who is more used to playing with music than playing solo, it was beautiful doing a drum show with my full band. 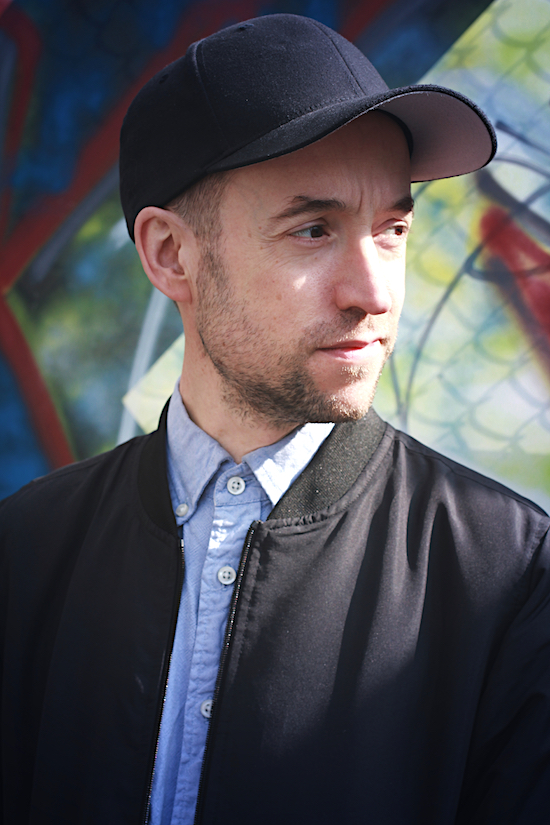 I’m about to head to India for the first time – I’ll be collaborating with an Indian artist Sandunes. I’m looking forward to the Spaven x Alfa Mist record that is coming out later this year on Black Acre. Its all recorded and we cant wait to play it live. After a recent run of shows my band is sounding better than ever – I’m looking forward to more shows. Also if you’re in Porto or Galway – I’m coming to play those drum shows.

Thanks a lot for your time Richard!

About the Author: Tobias Miorin