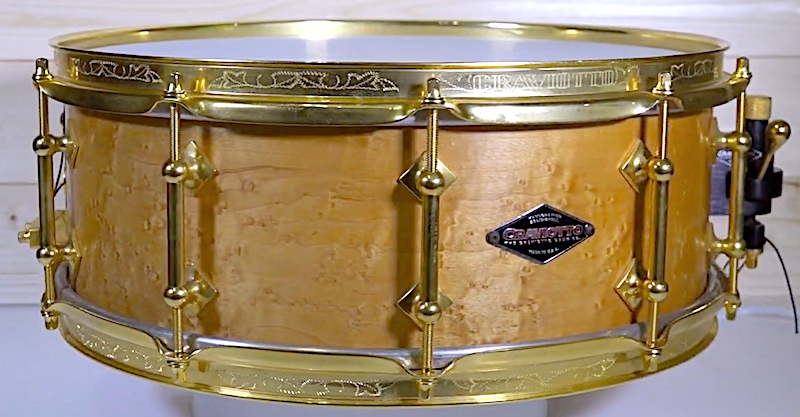 The first drum I ever saw and thought, ‘if I ever had the money…’ was a Craviotto Timeless Timber snare. Ok, it wasn’t this snare, but was one very much like it, although dare I say it, this one is better looking and more collectible. It was in my local drum shop about twenty years ago, in a glass case opposite the counter. I can still see it now. I wanted a Timeless Timber drum from that point onwards.

Roll on some seven years and I managed to buy this specific drum from Steve Maxwell in Chicago. Admittedly, I took a small bank loan to buy it and it wasn’t cheap, but I finally had one of my bucket list drums. Enter one very happy camper…

’Timeless Timber’ refers to the wood/sunken logs found in the early 1990s in the depths of Lake Superior (and the wider Great Lakes area) which had been cut down in the 1800s and been submerged in the cold water for over 100 years. You can find out a bit more about the wood here – https://www.timelesstimber.com. More recently, I understand the term has been slightly appropriated by DW and has also been used to describe other woods of a similar historical background.

Anyway, that drum twenty years ago was one of the Timeless Timbers built by Johnny Craviotto and marketed by DW. That was one of a run of about 200 drums worldwide.

This month’s drum, however, is a 1 of 1, which is why is that much cooler and a bit more valuable. It was made in 2006 from what I was told was one of the last – and more densely figured (meaning the wood is more visually appealing) – boards that Johnny had left. The hardware is all 24k gold plated and the engraving was done by John Aldridge.

I’ve always thought this drum was slightly more dry sounding than regular maple drums but that might just be me. That was based on a recording I did with the drum in 2008.

Regardless of that though, it is one of the drums I have which gets the most attention from people and it’s certainly one of the best looking for sure. It is also most definitely a keeper.