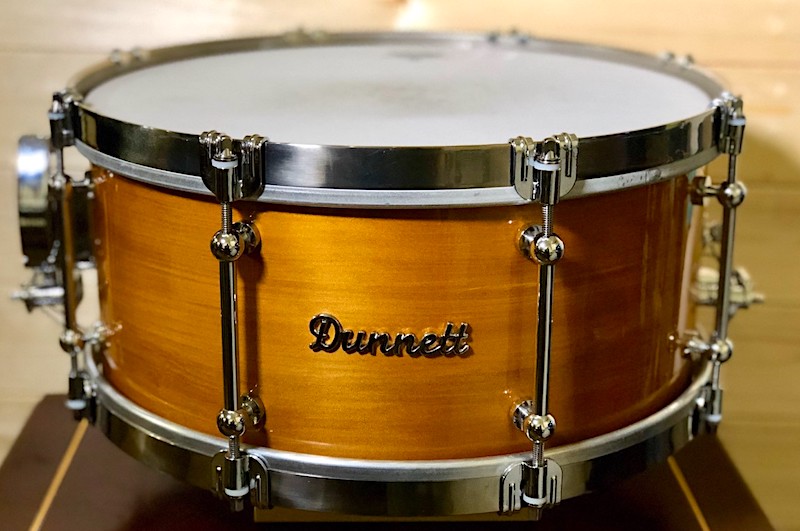 Kauri is a species of wood that grows on the north island of New Zealand. Swamp kauri (also known as ancient kauri) is wood that was buried in marshland and only found in the last few decades. The trees themselves grew for around 1,000 to 2,000 years before they fell around the end of the last Ice Age, and the wood has been radio carbon dated to about 50,000 years old.

The drum itself is quite special as it was from a run of only five  made by Ronn Dunnett in 2007, which included only three in this size, and from memory, a smaller 14” and a 13”. In line with Dunnett tradition of naming drums instead of serial numbering them, this drum is called Ashlynn and was number four out of the five.

The shell is steam bent solid kauri and has maple reinforcement rings. The wood itself is not the most expressive in terms of figuring (when compared to something like birds eye maple) but the colouring is quite striking all the same. I also found out in November 2018 after speaking to Ronn directly that Johnny Craviotto made the five shells for him.

The drum features eight double-ended tube lugs, sharp bearing edges, wide snare bed, a Dunnett throw off and butt plate, Hypervent (adjustable air hole) and rolled titanium straight hoops which are painfully expensive just on their own. The wires are 30 strand Puresound but the drum originally came with 42s.

I’ve owned the drum from new, purchasing it from the long gone Poole Percussion around 2007/08.

Although it does fall more into the ‘fancy’ category rather than ‘everyday use’ side of things, it’s still a cool drum and I have used it for recording in the past and some home use in the past.