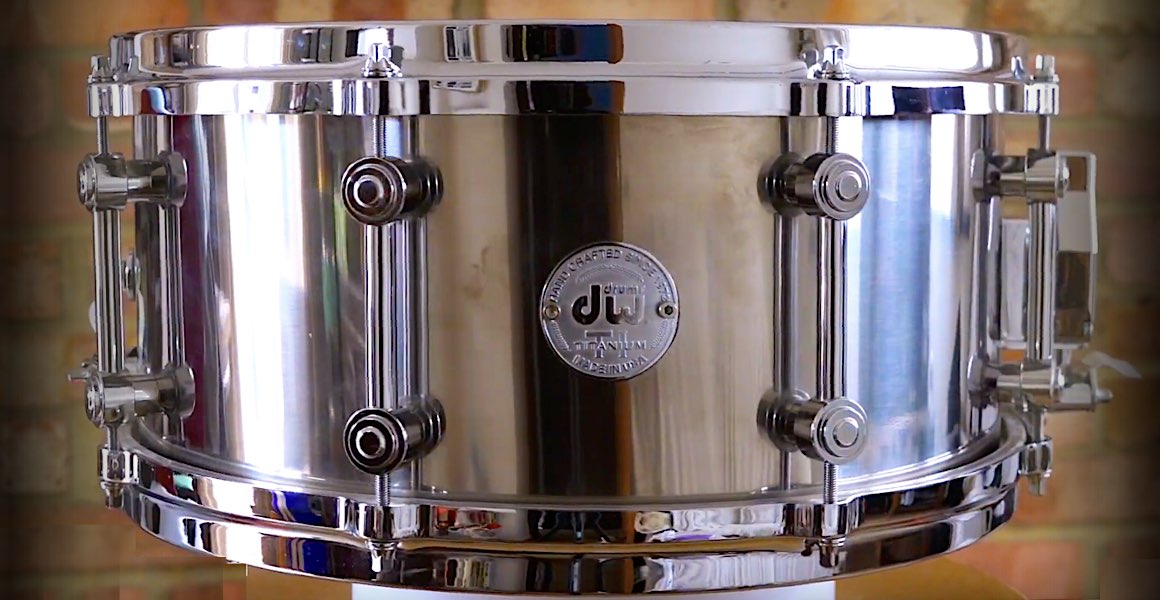 If you caught the fairly recent issue of [UK mag] Rhythm which featured Red Hot Chili Pepper’s Chad Smith, or if you type in ‘Chad Smith busking’ into YouTube, you’ll have seen this drum.

It’s one of the original DW Titanium snares – not one of the ones Drum Workshop currently markets – made by Ronn Dunnett well over a decade ago. It is number 36 of the initial run of 75 drums, the identifying number being hidden under one of the two badges.

The drum has a 14×6.5” shell, die cast hoops, eight double ended mini-turret tube lugs, Dunnett mechanism and Hypervent (adjustable air vent), DW butt plate and came with Remo heads and 42 strand wires on it, although I replaced these with Puresound Equalisers because one strand had broken (and I was in a hurry at the time). It also came with a nice leather case too.

Now, my wife is a big Chili Peppers fan. I said the drum could be used for the Rhythm photoshoot if Chad could sign the head to my wife or write something on it he thought was funny.

After the drum had been used, it was couriered back to me. Or, at least, it was supposed to have been.

That day, I happened to not be home, but my wife was and so I asked her to check the drum was ok, hoping she’d see the head. Unfortunately, there had been a mix up and the other drum used for the photoshoot had been sent instead.

After some texts and a new courier trip, the correct drum turned up at my house. This time, I’m on the phone talking to my wife as she undoes the box. Bit of a pause later and she realises what’s staring back at her – ‘To Lisa…my first love. Always, Chad Smith’

That head is now on our living room wall…