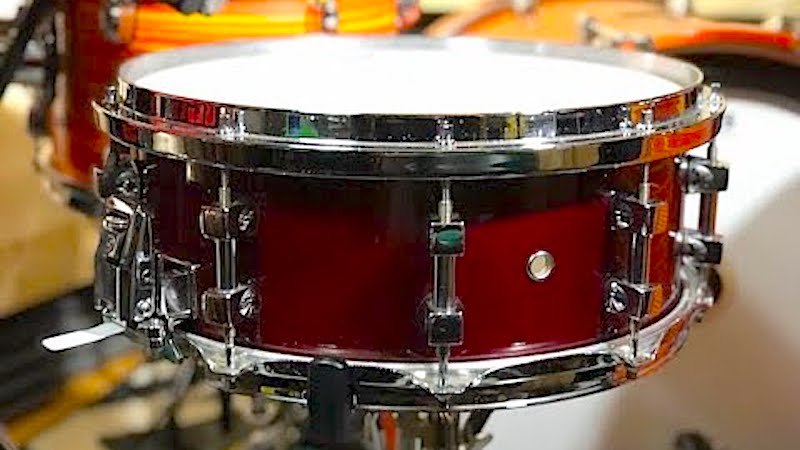 Ever since I first saw one in the pages of Rhythm magazine in the early 1990s, I wanted a Premier Signia, even if it was just a snare. And it had to be in cherrywood. Had to. I don’t know why, but I think it was probably because that was the first one I saw in the magazine. However, at about 20 years old, these really expensive drums were a world away from me.

Fast forward to 2019, I’ve grown up a little bit and I finally get round to buying a Signia snare in aforementioned cherrywood. I feel a tiny bit closer to my younger self all of a sudden…

The Signia line came out in 1992. It was Premier’s flagship line, its first time producing maple drums and it represented the pinnacle of the company’s designs and experience to that point. The line also featured numerous new and original features.

This 14×5.5” snare drum features a slightly undersized (as were all Signia shells) 5mm 5-ply shell, with 6mm beech reinforcement rings. The concept of the undersized shell (by a total of 12mm) means that the heads seat better on the edges, a la tympani. The heads, in this case, being a Remo coated ambassador and clear snare side. This is fairly common now, but then this was quite different.

Now, this hoop is possibly a bit of a divider of opinion in terms of look and feel, but personally I like it. Being aluminium, the hoop itself isn’t particularly heavy but it does give a good solid feel to the drum when laid into. It may possibly reduce the potential tuning range very slightly, I don’t know for sure, but what it does give is good enough for me. I believe Premier later phased this out in later years.

This drum came to me in excellent condition, which is great considering it’s give or take 25 years old. Sonically, I find it sits really nicely at a medium tensioning and that’s where I plan on leaving it. It’s got enough crack to it but also retains a nice level of body too.

These are great snare drums and thankfully come up quite frequently on eBay for really not that much money.