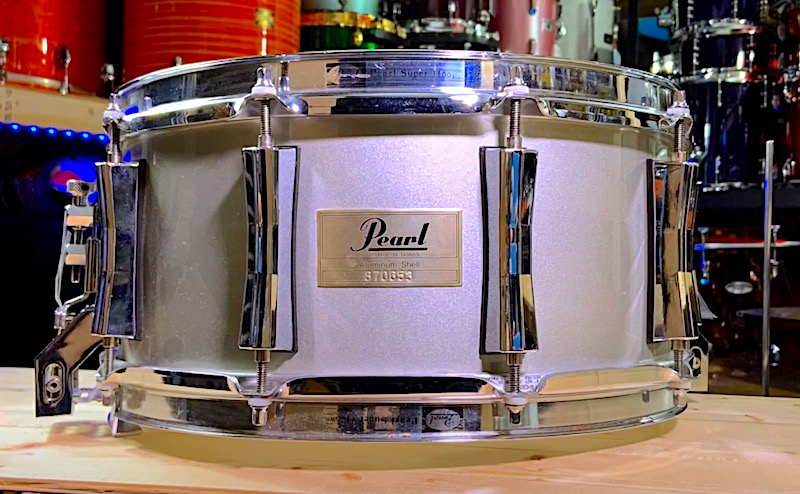 I’ve said to many people over the years that I think this drum is a bit of a sleeper. And, funnily enough, I also said the same about another aluminium Pearl drum about a year ago, on that occasion, the Tico Torres model.

Someone asked me recently what my favourite snare drum shell material was and I said brass. Upon reflection though, I think it might actually be aluminium, specifically because of this drum.

I have numerous aluminium drums, including several of a rather well known model, but it was this drum which really got me hearing the sound of aluminium.

The drum itself is an early 1990s AL-6214D, something I genuinely didn’t know until writing this now; I’ve always simply just referred to it as the ’14×6.5 aluminium’.

It’s in overall good condition for its age with just a little bit of rust here and there on the 2.3mm triple flanged Super Hoops. The 10 high-tension lugs were a common concept at the time but to my eye do date the design a bit. The S-013 strainer is basic but functional. One of the more obvious features of the drum, however, is the extended snare wires (which are around 15” for a 14” drum) and bridge system, which allows for extra snare sensitivity. It may seem a bit of overkill for a snare system, but it works, even if it can be a little fiddly sometimes. I put Evans G1 coated and 300 snare side heads on it upon receipt. The finish is silver lacquer.

The reason I think this drum is a sleeper is because it’ll go up or down and do it with ease, and it has such a wonderful controlled ring to it; like I said, this was the drum which really made me hear the qualities of an aluminium shell and really love it. I think if someone asked me to describe the sound of this drum though it would be ‘controlled’ . That’s its key feature for me. I think the other big selling point for this drum is that you can pick them up very affordably as even at the higher end of the price scale they’re generally sub-£250 drums.

Personally, I think Pearl made some really great snares in this era, and this is one of them. It’s definitely one of my all-time favourite snares and I’m reminded of that every time I grab it to play.