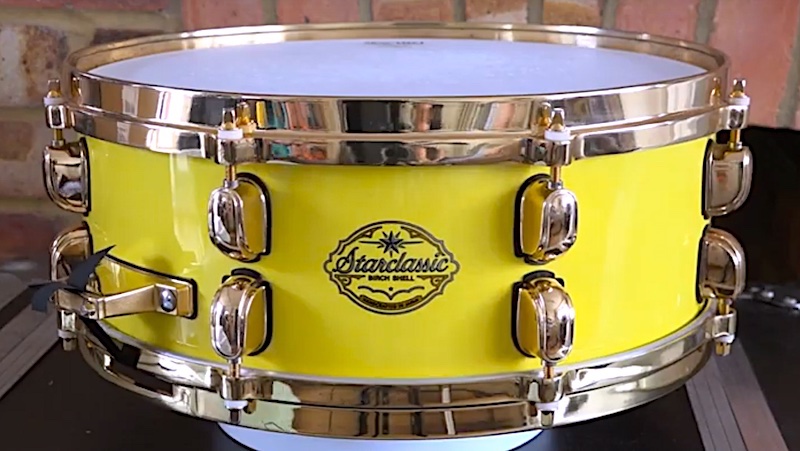 This month’s snare drum isn’t just as much about what the drum is but also who it was originally made for.

Gary Husband, for those who aren’t aware, is a noted British drummer (and pianist as well). Whilst he’s mainly known for playing another company’s drums, for a short time about twenty years ago Gary played Tama. This snare drum was [apparently] made especially for him along with the kit he used during that period.

Now, first off, all of the other Starclassic snares I personally own are ten lug drums, whereas this one is eight, so that’s a bit different for me.

Structurally, the shell is in excellent shape. The 14×5.5” shell is birch, has gold hardware, Remo heads, 20 strand wires and die cast hoops. The sound at the medium tension is bright and vibrant, with a nice pure residual ring.

To say the drum is visually striking is obvious; the bright yellow lacquer – even after nearly twenty years – still looks great. The gold hardware is a little rough in places but I think it gives it some charm. I’ve kept the drum at the aforementioned fairly medium tension because I liked it there and the two other people who have tried it recently have both agreed too. I’m yet to channel any of Gary’s magic through it though…