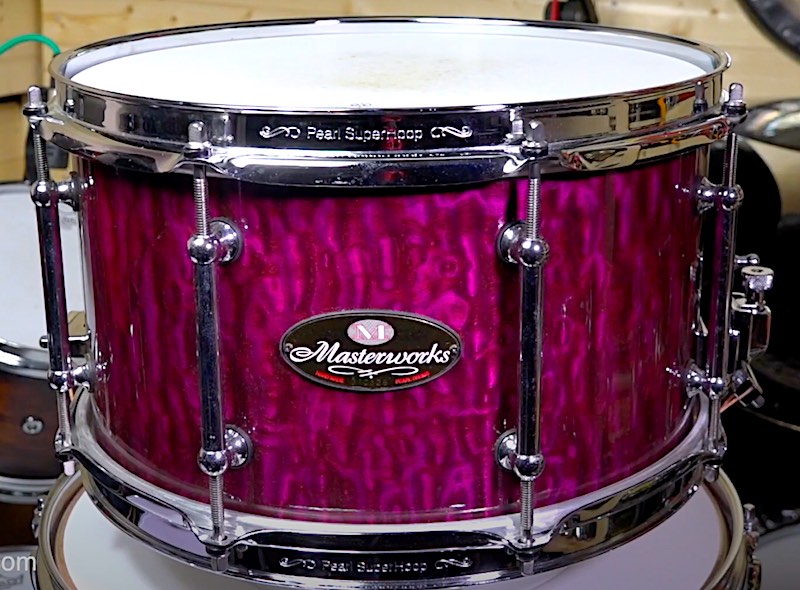 This drum comes with two stories, the initial one of which is fairly routine.

First of all, and as you’ll have seen, it’s a 12×7” Masterworks in a purple tamo finish which I bought second hand.

The shell is made from mahogany with just a hint of maple in there too. It has eight tube lugs, Pearl’s triple flanged Super Hoops, Pearl 20 strand wires, smaller [mini] strainer and Remo heads. While I did manage to capture the purple tamo finish in the video, I’ve never managed to capture it so it looks as good as it does in person.

12×7” is a size I like a lot and I have a number of snares in that size. It gives you the higher pitch of a smaller drum but still offers a more full bodied sound as well. In playing terms, this drum will do high and low in a pretty convincing manner, albeit with that higher pitch always being there.

Now, the second part of the story involves the case this drum came in.

The case itself is fairly unremarkable, other than it has a corresponding fluffy purple interior.

Now, I must have bought this drum some fifteen years ago from someone I knew at the time and he had this drum made when he worked for Pearl. 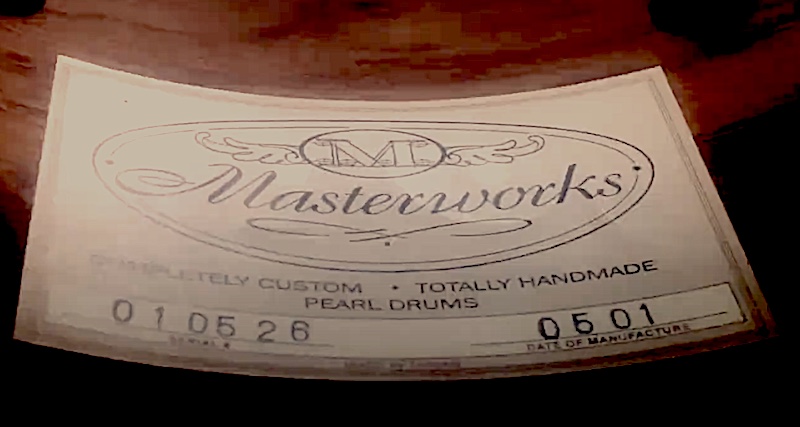 On the bottom of this very unremarkable case was stencilled a name. For some 14 years I always casually wondered who this person was but never really paid it much attention since there was obviously no way I’d ever know short of asking the original owner and I wasn’t going to do that, because that might be a bit strange at that point, and he might not even remember.

Roll on 2019 and I buy a snare drum off eBay from a guy local to me. Nothing that unusual there either really. However…

At this point, I’ll clarify that this second person lives a good 40 miles from the original guy I bought the drum in question from, so they’re not exactly near to each other at all. So I go round to this guy’s place to pick up my new drum. We chat. We find we actually know some of the same people and have a lot in common too (a year later and it turns out we also frequented the same record shop in London as teenagers too; anyone else remember Shades in St Anne’s Court?). I then remember this case I have and mention it. Turns out, he’s the person whose name is on the case and he went to school with the guy I bought it from in north London (which wasn’t where the original owner lived when I bought it). He said he never knew the first guy had the case to begin with.

That drum world we all know and love? It’s very, very small…