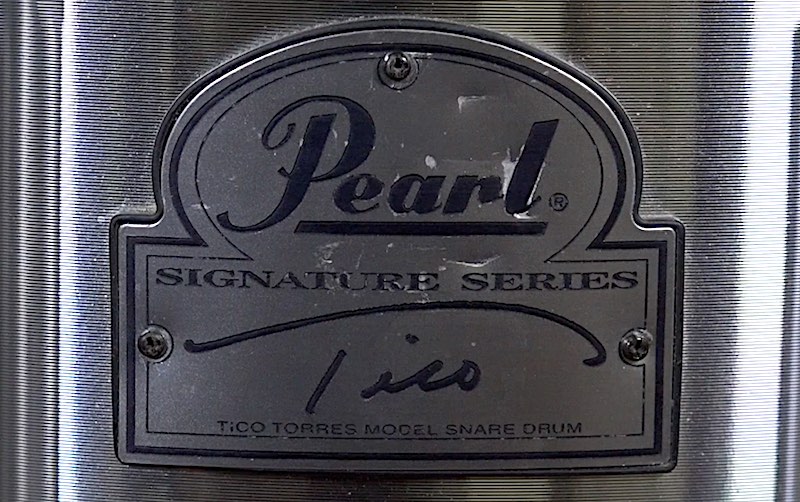 I think it’s fair to say that most people have heard of the band Bon Jovi and have therefore heard Tico Torres play. So ok, that might be true, but why make this a snare drum of the month?

Well, in my view – and others too it seems – this drum is a bit of a sleeper. That is to say, it’s a bit of a special drum that is overlooked.

The drum was – obviously – designed and made during Tico’s long [former] association with Pearl.

Pearl’s free floating design (which means that basically the shell is freestanding and no hardware touches it at all apart from the free floating frame) has been around for ages and can be found on many models of the company’s drums. Nothing too exciting there.

No, the reason why this drum is a sleeper is because of the 3mm thick cast aluminium shell it comes with. Nice, thick and beefy, both in terms of playing and sound, but still sensitive. The drum also features satin chrome hardware which looks cool, dual snare mechanism, 20 strand steel snare wires, die cast hoops and stainless steel tension rods.

Cast shelled drums are generally comparatively expensive, especially if they’re sand cast. This is because sand casting in particular is an expensive process. Now, I think it’s safe to say this shell isn’t sand cast, which is why the drum didn’t/doesn’t cost four figures. However, to my mind, with this drum you get the benefit of both the thick shell and the unencumbered free floating design which together give you a great sound and feel.

With all that in mind, this drum is loud, robust and pretty cool looking too, which if you look around carefully for, you can sometimes pick up for a steal like I did with this one.