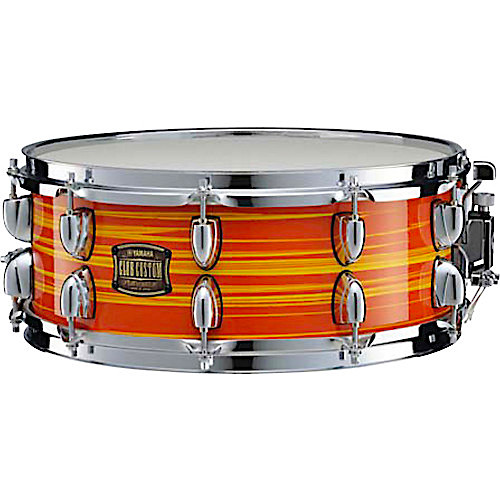 Something a bit brighter for the New Year!

This is a fairly stock drum in the sense that it was a regular production model for the few years the Club Custom line was available. That said though, I think it’s cool for two reasons; one, the finish – which I’ll come to – is different to most drums you can get and two, Steve Jordan had a lot to do with the Club Custom’s design and he used drums in this colour configuration. Ash Soan also had an orange set. They’re two of my favourite drummers. Say no more…

The numerous Club Custom swirl finishes are actually painted; they’re not a wrap as may seem to be the case.

There are three layers of colour involved with the finish; the background colour, then the orange and yellow. The paint is put on in layers and then taken off in stages (using ropes as the drum shell is spinning apparently) to create the final textured finish. The layers of paint are quite thin and are lacquered on top to give that very cool look. If the orange wasn’t your thing, there was also the choice of black- or blue- swirl, or matt black or brown.

The 6ply 7mm thick Japanese made shell is kapur, which is a wood that is gaining popularity in drum building. The edges are 60’, so nice and rounded, and it has a fairly wide snare bed. The hoops are a thinner 1.6mm triple flanged design, held down by ten lugs per head and Yamaha’s standard hardware finishes the drum out. No frills, but functional.

While the drum came with a Yamaha branded Remo coated Ambassador batter (and Remo bottom head too) as standard, I changed the batter out for a Remo Renaissance head as I just wanted something a little different.

I’ve gigged and rehearsed with this drum and unlike the prior two drums in this series, is quite useable as a daily driver. I bought it second hand in almost new condition a few years ago and when I play it, I like to delude myself that I am channelling the inner Jordan…