Snare Drum of the Month – Craviotto/Kirchler 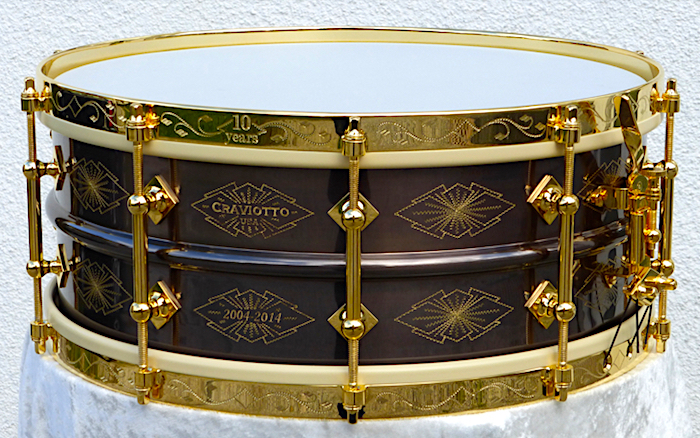 As this is the start of a new series, I thought I’d come out of the gate with a little bit of style.

The name Craviotto (https://www.craviottodrums.com) is probably known to most people by now. Or it should be anyway.

This drum, which is number 14, was a limited run of just 25 pieces worldwide and was created (in part, since there were wood drums as well) to mark the 10th anniversary of the Craviotto drum company in 2014.

The 14×5.5” hand-made one-piece gun metal finished brass shell was made and engraved by master builder Adrian Kirchler in Italy (http://www.ak-drums.com). You might not be too familiar with Adrian’s name, but chances are you’ve seen his work; he builds drums under his own name but has also built drums for Ludwig as well (the gold 100th anniversary drums).

These drums sold out at the time of release which wasn’t surprising given their limited nature.

I actually found out about them at release time via a tour of the NAMM show which Simon Edgoose was doing for the website and immediately decided I had to have one.

It was late at night and I was in bed at the time, but grabbed my laptop to email Steve Maxwell (THE guy to go to for Craviotto and my main source for these drums in the past) and said ‘I have to have one!’. Steve responded to me almost immediately and said he could get me one of the last ones available. I was very happy.

Now, one of the key things for most mortals when buying drums – me very much included – is cost. Normally, a sensible person first asks, ‘how much?’ before committing to buying something. It’s only natural really.

In this case, that tiny aspect rather escaped me at the point of committing to buying this drum. It was probably a good job I was laying down at the time Steve informed me how much he could do it for, as it wasn’t cheap. Mental note regarding buying things going forward… I can’t remember if I told my wife the price then or later on.

This is a Sunday best type drum, rather than a daily driver.

Whilst Adrian makes shells in the spirit of the old 1920/30s drums, this drum is completely playable and solid, whist retaining that same vintage vibe.

It doesn’t feel flimsy or delicate at all, and I’m sure it could take a rimshot and strong back beat, although I’m not going to test that. Given though that the rims alone are thicker than almost every snare drum shell I own, I’m guessing it would be fine.

The drum has been played at home and on one gig – a light thing in someone’s garden – but is one of those drums which is loved and played sparingly. However, if the right situation comes along, it’ll always be played as it feels and sounds much better than my snare drums that were actually made in the 1920s.