Into the Great Wide Open 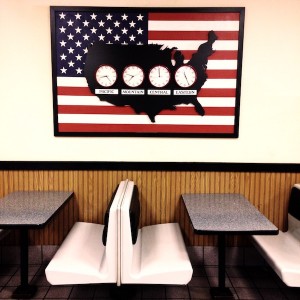 The last few weeks have flown by in a whirlwind of eggs-over-easy, weak coffee and, thankfully, a big bunch o’ badass American gigs.

I’ve been abroad with Saint Etienne traversing the glorious United States of America on a tour that began up in Boston, bounced around the northeast, dipped into the midwest before landing in Seattle and heading down the west coast to Los Angeles.

I flew out a bit before the rest of the band and spent a fun few days acclimatising and exploring the coastal road north out of Boston. Hours of peaceful scenic drives around the beautiful national parks of Maine and sampling their signature lobster roll (you can buy one in McDonalds up there!) proved a welcome pretox.

Inevitably I always have an eye out for a drum shop and managed to visit a good few over the course of the trip. As per American cliché, the music shops are also way bigger Stateside – particularly when it comes to vintage gear and the quantity, quality and value is much better than here in the UK. 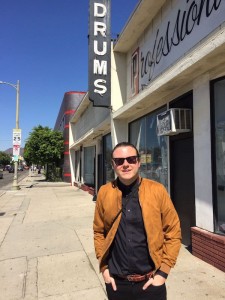 My first stop was in Portland Maine at the (creatively named) ‘Drum Shop’. After a little cryptic back and forth between the staff and myself, I passed the unspoken test, gained their trust and was beckoned out the back of the shop and into an enormous warehouse stacked to the rafters with more Slingerlands, Trixons, Rogers, Gretsch, Ludwigs and Leedys than I’ve seen collectively in my life up to this point. If you’re ever up that way tell ’em Mike sent ya and check out the mother lode for yourself!

Likewise I loved the Portsmouth Drum Center in New Hampshire where they even have a drum museum! Featuring a number of prominent, prestigious or otherwise of-note sets I was astonished to find an identical kit to my precious ’74 Rogers Butchers Block!! I’d never seen another one in the flesh so it was a surreal moment and I chewed the ear off anyone in there willing to listen to me yap on the matter.

Further drum shop visits happened in Chicago (Drum Exchange) and on the very last day a final pre-flight shopping call at the Pro Drum Shop in L.A. (they really need to work on those names). 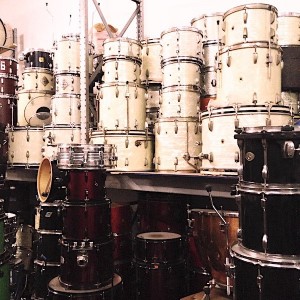 Again it’s a more vintage-orientated affair and the walls are covered in posed promo pics of the drummers of yesteryear (Note to self: could this tradition be resurrected?). There’s also stacks of original drum heads from the likes of Charlie Watts, Louis Bellson, Tré Cool, Elvin Jones and even one of Buddy Rich’s actual Slingerland kits! Needless to say I’m in my element and buy a memorial agogo to celebrate.

The shows all went well and the reception for Saint Etienne was nigh on hysterical at times. Having not played in the Americas for a half decade the demand was palpable and many people traversed the country with us attending multiple shows!

In terms of equipment I took very little with me – mainly just the electronic elements of the hybrid setup I’ve been using with the band. The backline for the shows was provided by rental companies and I was struck by what great quality it was. The kits were all Ludwig’s with new heads as per my Coated Emperor request and normally came with a 402 and a Black Beauty to chose from…! What luxury! 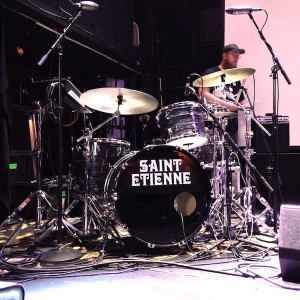 But the hardware was mega heavy duty. My own gear at home is favoured for it’s luggability given the frequency that I’m pulling them in and out of my car (and the dearth of roadies in my career so far!). But a rental company are far more interested in indestructibility and the DW9000 stands – seemingly the industry standard now – works well but I find cumbersome to manoeuvre and visually clunky.

All the same I can’t complain and most importantly the spec’d rental K’s and Ludwig tubs always sounded great.

Indeed what a pleasure and a joy to travel the glorious United States and play the finest drums with a great band to an appreciative audience every single night! The venues were all interesting and charming and a little bit different to what I’m used to, including a memorable night at the famed Fillmore in San Francisco. 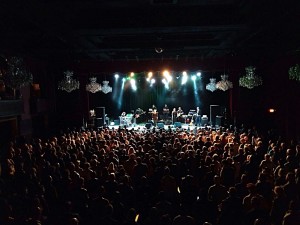 For anyone interested in even more gnarly details from the tour I wrote a great deal over on my regular blog. Over the past few years I’ve got really into record-keeping and there are long term rewards to recording the many exciting adventures and eccentric characters that inevitably befall one. And as many who may have experienced life on the road may know, the travel and pace and new experiences can make it a whirlwind of a time and I find that putting pen to paper regularly is a great way to maintain focus, avoid temptation and ground my chakra.

I’ve long been hungry to see the world and I’ve been lucky that music has proven the vehicle to show me some of it. And I hope that those who may have similar aspirations can take some inspiration from my tales and know always that anything is possible if you stick at it long enough and keep working hard.

Next up: a run in the Scandi’s and beyond…