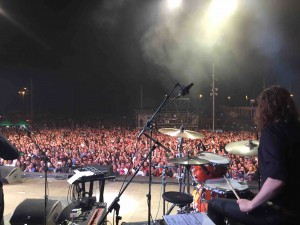 Howdy drum fans and thanks for joining me once again!

I’m grateful to have had a packed month behind the tubs, firstly in rehearsals with Saint Etienne, and then a torrent of gigs both at home and abroad.

But first up was a fun late-night spot at a festival called WOOD depping with Oxford band The Dreaming Spires. The headline act was Jody Stevens, drummer from classic American band Big Star and a personal favourite, who hung around to watch us once his set was done – way to make a guy feel self-conscious! But the gig went off and he was very friendly and complimentary. Good times meeting a legend!

As mentioned in the previous edition I recently got the call to play with British indie-dance band Saint Etienne and it was into pre-production we went this month, ahead of a UK tour and some festival dates. Their music blends a number of different styles and approaches which means a pretty varied drum setup – there are songs that are entirely electronic, songs that are entirely acoustic, and various arrangements in between – sometimes with track and sometimes without. 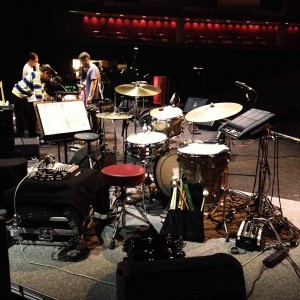 My oft-mentioned trustee Rogers Butchers Block formed the core (I barely leave the house without her these days!). But for the electronic requirements (samples, hits ’n’ breaks) I reach for the Roland SPD-SX, a versatile piece of equipment that has become an industry standard – go to any festival these days and you’ll see more bands that have them than don’t.

As well as using the main unit to launch the odd sample, the ‘trigger inputs’ mean that you can easily connect an external pad (or four) for more convenient access, and I settled on one auxiliary pad attached to the hi-hat stand and an electronic kick.

Given that many of their songs require the big four-to-the-floor, it was important to find a comfortable and reliable right-foot situation in order to deliver consistently. I tried a few different approaches, initially using a double pedal to play a pad off to the side of the acoustic kit. It was all a bit clunky and I figured there must be an easier way – fortunately Simon Edgoose (Dolbear editor no less!) pointed me in the direction of the Roland KT-10, a smart electronic kick drum trigger that I’d heard about but never used before. It wasn’t cheap but the neat and clever design made a lot more sense – easy to set up and compact for the fly-aways too! But most importantly the feel was really solid for them there electro kick beats. 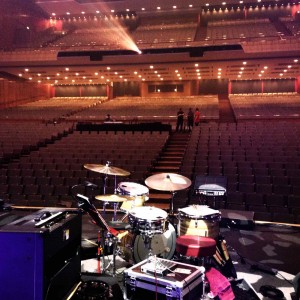 With the SPD-SX loaded up for all electronic eventualities, I used a small mixer by the drum set to blend my in-ear feed, the click from the track, plus anything I needed from the samples. Every song in the set has it’s own ‘kit’ patch that I would sequentially switch through (by handy foot-pedal no less) to give me any tempo references or sounds I might need. Happy daze! A little pre-prep pays dividends in a furious festival line check – keeping it simple! (Simple is always good).

From a musical perspective, many of the ‘classic’ St Etienne tunes feature drum loops and programmed patterns. For the most part my drum beat would be providing the core feel while loops and track will bring in the elements I couldn’t do live. It’s a style and way of playing that requires a little learning and discipline but offers vast rewards when it sits just right – I’m channeling the Earl Palmer playlist from some months back! Tight, groovy, bouncy.

With rehearsals complete it was on to the gigs. We started one hot summer night at Hebden Bridge Trades Club, a quirky 200 cap. venue near Manchester, popular for warm-ups. The UK tour followed including a great show at the Royal Festival Hall in London and a big late-night slot at Primavera Festival out in Barcelona. It’s a wonderful thing when music takes you to interesting and exciting places and I even found time to do a little sightseeing! 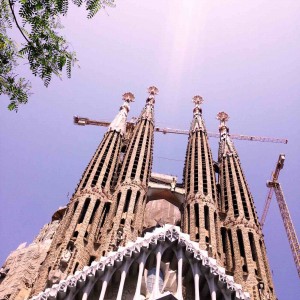 At the Sheffield Town Hall gig it was fun to catch up with my friend Rich Birkin. I first met Rich last year at Secret Garden Party where his band, The Hot Soles, also played and he’s recently begun building his own snare drums under the name Barkby drums. He brought his latest construction along for me to try – a 14” x 8” maple stave drum that was beautifully made and beautiful sounding with many nice details.

He also gifted me his latest creation: the Barkby Drum Bag! It’s a little waxed cotton zip bag with a carabiner that attaches onto a stand or case to keep your car keys wallet phone rings in during the gig. Neat idea! Thanks Rich.

Alas I’ll spare all the finer grizzly details of the tour for a more in-depth post that will appear at some point over at VFTDS HQ [Tumblr link: http:viewfromthedrumstool.tumblr.com]. But keeping me preoccupied back on the tour bus was the audiobook of Donna Tartt’s ‘The Goldfinch’ along with Grayson Perry’s great book ‘The Descent Of Man’ which offers a little perspective on it all; not least the world of drumming. 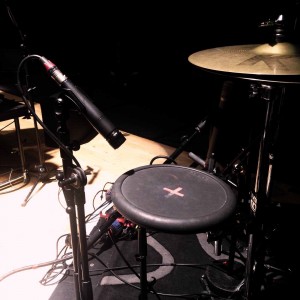 It’s been wonderful to hit the road again and the band and crew were all fine company. The joys and adventure in the great beyond can’t be compared – from the canoodling couple on the front row in Manchester to the pre-show curry in Birmingham, to the delight of finding Drum Central drum shop located right opposite the venue in Edinburgh! All memories I’ll carry.

Thanks as ever for reading and I appreciate the kind words about the blog from those I met along the way.

Thanks also for the well-wishes regarding my bad-back as referenced last month! Indeed my trips to the chiropractor have been insightful – somehow I’ve managed to pick up some bad habits in my movement and have twisted my spine – the product of 10 years+ playing, lifting and loading drums? Who knows. But with a few neat exercises and a little treatment the relief has been significant and the last month much less uncomfortable. Back on top!

See you all again next month for the July edition of View From The Drums Stool.

Until then stay safe and keep it rhythmic,