Spring has sprung once again friends, although long hours on the road have meant that only my right arm so far has any colour – I think they call it the truck drivers tan…?

I recently returned home late from a Leicester show to find my Dad confuzzled in a corner, leant over his guitar trying to work out the difference between a harmonic minor and a melodic minor. Albeit 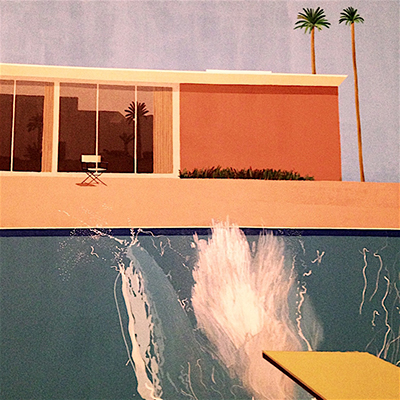 later in life, both of my parents have
, in recent years taken to learning musical instruments – my Mum at the piano and my Dad favouring that six-string thing.

Despite my initial disappointment that neither should share my percussion passion I’m supportive of their endeavours in learning. Pop
in particular is oft perplexed by the world of diatonics, triads, keys and lydians that pepper the harmonic world (count our largely unaffected drummer selves lucky) and I try to help where I can, grasping at limited formative but informative knowledge gleaned learning trumpet from a young age.
I think they were inspired in part by family-favourite David Hockney, a man now nearly eighty years old but still a pioneering creative force. Earlier this week I went to London to look at his exhibition at the Tate Britain. Although I’m no great art-nut I’ve long held a fascination and respect for the work of the great northern English artist and somehow his translation of life into art – notably the California years – resonates for me.

What I found most inspiring about his career was the great variety of styles and mediums that he has explored – not just within painting but beyond into photography, theatre, printmaking and even his most recent iPad drawings. I felt an important and valuable message about creative exploration and an idea that applies to us as drummers (and artists!) never to feel bordered but endeavour to explore and push where our instrument – our 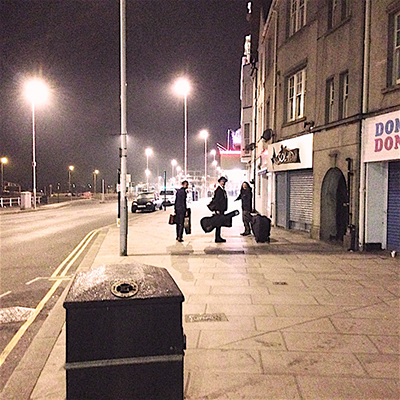 vehicle – can take us. Further than we probably think if his journey with the paintbrush alone is anything to go by.
His retrospective at the Tate Britain lasts until May and I would urge any and all to give it a look!
Alas; beyond a little philosophical enquiry it’s been a month spent largely on the road, and I count myself fortunate to be based as centrally as I am. Indeed my – thus far – ‘trusty’ (ill fated words) Vectra has proved a fine steed and we’ve been north for student gigs, south for some shows-by-the-sea and in and out of London so many times that the staff of Beaconsfield Services know me by name.
With late nights at the wheel with drums my only passenger, I’m sure I’m not the only musician to feel a strong bond with my faithful equipment whom remain by my side (or in the back of my car) through rain and shine. Nick Hopkins recently wrote a great article on the website read more  about the Rogers Dynasonic Snare and I wholeheartedly endorse the classic drum. I have a 5 x 14 COB that has been my go-to among a heady arsenal for some time. It dates from 1974 and I am oft energised by it’s age and the thought of the many players who played her before me – and indeed the many exciting times ahead too. It was an eBay gamble some years back (alongside the oft-featured Powertone Butchers Block) and indeed the seller still contacts me on a yearly basis to get the updates on how she’s fairing! Inevitably well. 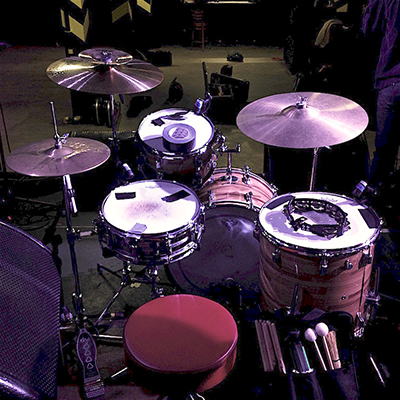 Proof is in the pressing as they (I) say: yesterday I received a test copy of a forthcoming ‘Co-pilgrim’ album called Moon Lagoon which features the Rogers kit. The drums sound fantastic but the lush analogue warmth of the vinyl certainly helps to make it sparkle. After previous months read more  escapades with recording to tape I’m evidently an analogue man – perhaps I’ll try writing VFTDS on typewriter next month…[Oh no you wont – Ed.] 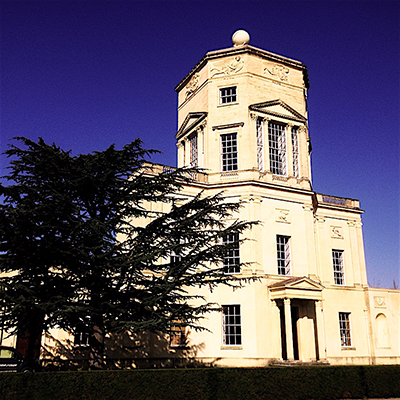 Anyway last night I returned home from the Beehive to find Pa elated in his discovery: the seventh note is raised a semitone! It’s obvious when you realise – for example tuning the toms higher for tone seems so simple now I know! Read more. Thus this month has held a lesson in learning, and a rumination on age, perhaps brought on by my looming Big 3-0. But I’m inspired both by my parents example and the work of David Hockney alike – fear time not, only use it wisely and keep learning. As my fathers elated smile demonstrates the reward is worth the effort.

All the best for April and May,