If you want proof that musical guardian angels exist, then look no further than Gilson Lavis. It’s not his fear that he’s living on borrowed time and any day could get a tap on the shoulder and replaced by a ‘real’ drummer. Far from it, his skill and ability behind the kit never in doubt in other people’s eyes, what was for many years was Lavis’ temperament, fuelled by a near fatal addiction to alcohol. Finding fame as the drummer with Squeeze, he got kicked out of the group twice, his life in ruins. 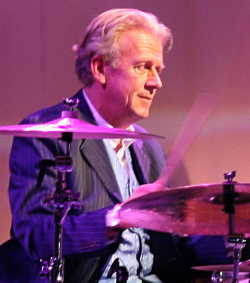 “I was an obnoxious drunk,” he admits. “I was a mess.” That he has beaten the demon drink, and drugs, and built his career and life back together is testament to his enduring expertise behind the tubs. Modesty apart, Lavis boasts an exquisite musical pedigree. He was Chuck Berry’s drummer of choice in the early 1970s – no mean feat in itself – and toured with artists as diverse as Edwin Starr, Dolly Parton and Tammy Wynette. And since his pairing with erstwhile Squeeze alumni, Jools Holland, he has gone on to play with rock’s royalty, from the Rolling Stones, Paul McCartney, Barry White and a stellar list of other musical acts.

Even so, Lavis appears to underestimate the abilities that have allowed him to stay at the top of his game for the past three decades. “I’m still waiting for the tap on the shoulder and someone realising I’m not really a drummer,” he says. “It’s a case of “Thanks for your help, Gilson, but we’ve got a real drummer for the job.” I’m frightened about it.” The fear is possibly sparked by Lavis’ desire to be nothing more than a sideman, helping keep the singer or star of the moment in the spotlight.

Preferring not to be a busy drummer, he relies on groove and feel and imbues all manner of tracks with it in abundance. With Glenn Tilbrook’s structured songs in Squeeze, he had to find ways of making the tracks stand out without ruining them – “the sweeper and the goalkeeper” in the band. “Music is about the emotion. It builds up tension in the verses and then releases it in the choruses. That’s what you do on record and on stage. You are building up tension, creating an atmosphere. “We have 3,000 or 4,000 people come and see us. Every one of them will have had a different day, a different journey to the concert, different problems, different stories and we set them free and get them loving life. They go away happy, buzzing.”

Unlike so many of his contemporaries, Lavis wasn’t drawn to drumming until his adolescence and he admits it was never a ‘calling’. With “16 guitarists” already in the school band, the only spot unoccupied was the drum stool and Lavis seized the opportunity, thinking it a good way to get girls. “I wanted to be that chap on the TV, on the 6.05 Special. I wanted to be adulated by girls, but I also loved music.” 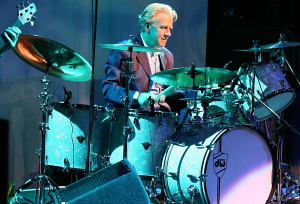 He started playing on a tambourine with a pair of his mum’s knitting needles and learned songs like Wipeout before his parents bought him a kit – a red pearl Beverley bass drum, snare and Zyn sizzle – and he started getting gigs on the local circuit. A joke with his careers officer at school led him to an early career as a ladies’ hairdresser, but keeping playing with semi-pro bands led him to an opportunity to go fully pro with a Scottish band, where he first learned about “drink and drugs”, and also led to him adopting a middle name, Gilson, as his stage name. “There was a keyboard player in the band called David and he didn’t think there should be two David’s in the band. Gilson is a family name and it just stuck. I think I just preferred it.”

In the early days, Lavis jokes his hardest lesson was to learn not to drum with his tongue out and he ‘competed’ with a lad at school who knew how to play drums. “I would copy what he did. It’s how I got better.”

Lavis is candid about the drink and drug problems that dogged him when he was a key element of one of hottest UK chart acts never to have a number one. Squeeze struck a nerve with the more discerning record-buying public, an updated 10cc riding on the pillion of punk. And while getting girls never seemed to happen quite as he had hoped, fame and fortune were as addictive as the drink and drugs.

Acknowledging he “was a mess”, Lavis argues the evils of alcohol, pills and weed were slow to affect his drumming because he was living out the life of what he thought a professional drummer should be. “I was a very aggressive player. I hit cymbals like I was going to crack them. I thought that’s what a drummer was all about. I was very naive when I first went pro. I was getting better, but I didn’t realise I was a drunk. “We were energetic live, a pseudo punk band. My aggression fitted what we tried to do. I’d throw sticks about, juggle them. Being a drunk was part of the act. I haven’t got anything good to say about being a drunk. Alcohol is a multi-headed Hydra that affects you in different ways. I spent most of my waking day wanting to die. We were having hits, we were popular, the money was good, but I wasn’t happy. We were playing Madison Square Garden and I was miserable. The illness drives you insane.”

Eventually his “obnoxious behavior” saw him kicked out of Squeeze after a series of high profile hits. Penniless, Lavis became a cab driver, vowing never to drum again. He also got help to kick drink and drugs into touch. Life was, he suggests, better than being constantly on tour and looking down into a bottle, although it was very much no frills. Then he got a call from Tilbrook about a one-off Squeeze reunion for charity, at the Albany Pub in South London. One thing led to another and the one-off gig became a series, then a recording session, then a hit record Hourglass, then a big tour.

“The physical side of playing the drums is just 5% of what you need. The 95% is the mental aspect of playing. That”s what takes it out of you.”

Initially life back on the rock ‘n’ roll road was very different, recalls Lavis. Far from being the hard-partying drummer of earlier years, he was sat up in the front of the tour bus talking to the driver about the weather. That is, until the last three weeks of the American tour, when he decided to have his first drink for several years. History repeated itself and for a second time he was kicked out of Squeeze. This time he bought a ruined cottage in Lincolnshire to do up and escape. This time he kept his kit and entertained thoughts of giving occasional lessons. This time he stayed off the booze and the drugs.

Once again, a reunion came calling to pull him back into the music world. This time it was Jools Holland, fresh from success as a TV presenter and eager to delve back into music his own way. Enter Jools Holland and his Big Band, which consisted of Gilson Lavis and, well, er, no-one else. The duo of piano and drums found a niche market and set about making a mark in music. Initially, grins Lavis, there was another ‘one-off’ gig, again at The Albany, and starring Glenn Tilbrook as a support. Talk about history repeating itself.

This time, Lavis was far from the aggressive player. When it’s only drums and piano, there’s no sense thrashing away and drowning out the keyboards. Another lesson learned. “The physical side of playing the drums is just 5% of what you need. The 95% is the mental aspect of playing. That’s what takes it out of you. I’ve been exhausted on stage, but the mental part is the one that gets you most. I struggled to get through the first gig. “I was retired, I was divorced and living in a derelict cottage in Spalding. My master plan was to renovate the cottage. I was burnt out, had done the pop star thing, worked with Chuck Berry, Dolly Parton, Tammy Wynette, Edwin Starr. But what Julian (Jools Holland) was offering was something different.” “After a few months we got a bass player, then a guitarist, then somebody else, then a brass section started to form. Eighteen years later…”

And he’s a vital part of the Big Band, AKA the Rhythm and Blues Orchestra. Lavis has played with the celestial stars of pop, rock, jazz, blues. You name them, Lavis has supplied the rhythm for the great and the good. From Robbie Williams to George Harrison, Paul McCartney to Lulu.

After much prompting Lavis admits he must have been doing something right to survive the hard taskmaster who was Chuck Berry, to keeping on the wagon and on the road with Holland. “If I didn’t do my job and make Julian happy night after night I wouldn’t be here.”

Lavis is the epitome of the drummer’s drummer. While he can mix it up like the best with his solos, he’s happy to be playing, to be making someone else the star. “That’s their job,” he says. “Mine is to make them sound good.”